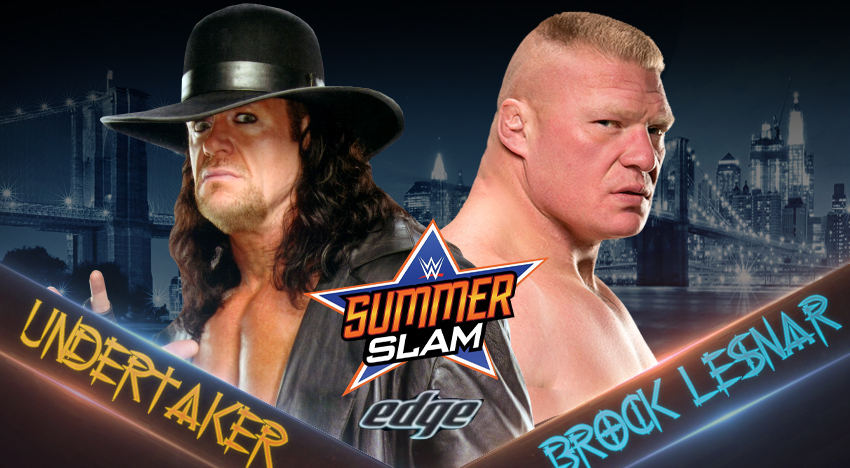 By: Larry Causion Jr.    CausionCreations.com
Posted: Monday, August 24, 2015
WWE SummerSlam delivered. 10 matches in a four-hour show, and it felt like a breeze. Lets take a look at the thoughts of myself and Dave Meltzer. 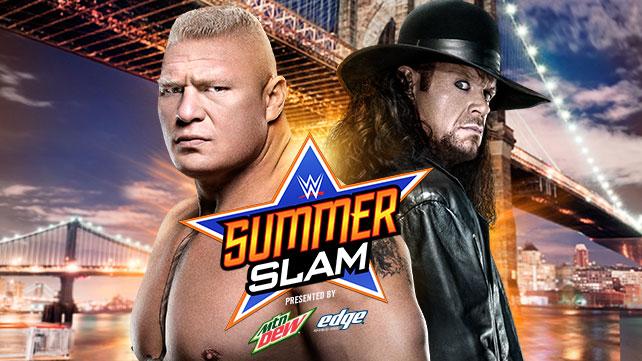 Brock Lesnar vs. The Undertaker
Really good physical match.  Undertaker took several suplexes.  Most of the match saw them kick out of big moves with Lesnar kicking out of the tombstone and then laughing at him.  Lesnar also escaped the Hell's Gate the first time.  Lesnar did an F-5 on the announcers table but Undertaker got in before ten, and then Undertaker kicked out of two different F-5s and also escaped from the Kimura.  Lesnar was bleeding a lot from a kick to the head early.  For the most part, the crowd cheered both guys. 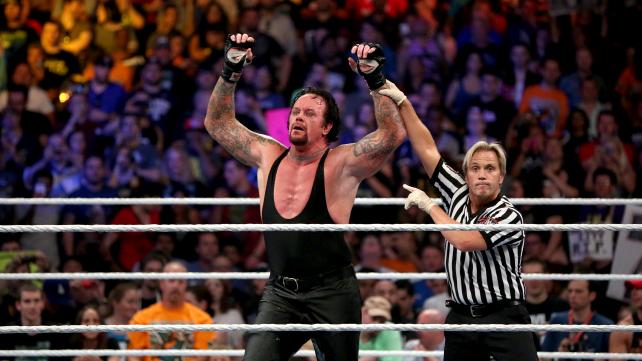 They did a disputed finish.  Lesanr had Undertaker in the Kimura and the bell rang.  Charles Robinson, the ref, said that he never called for the bell.  Lesnar celebrated like he won and Undertaker came from behind and gave him another  low blow and put him in the Hell's gate.  Lesnar flipped Undertaker off but then passed out.
The story is the timekeeper saw Undertaker tap out, and then in the replay they showed that Undertaker in fact did tap out but Robinson was on the other side and missed the tap.  Obviously the finish is to build for a third match. Paul Heyman was screaming "No" and fans were screaming "Yes."  Heyman said that everyone saw that Lesnar won by submission. 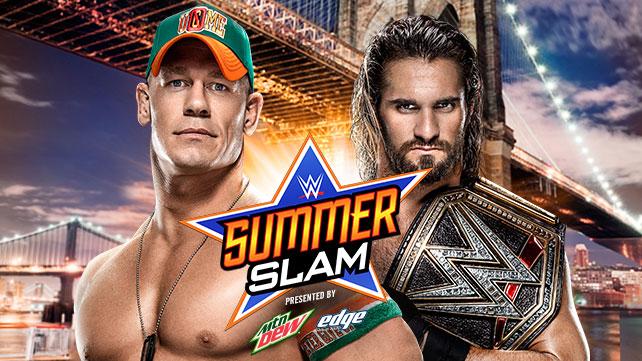 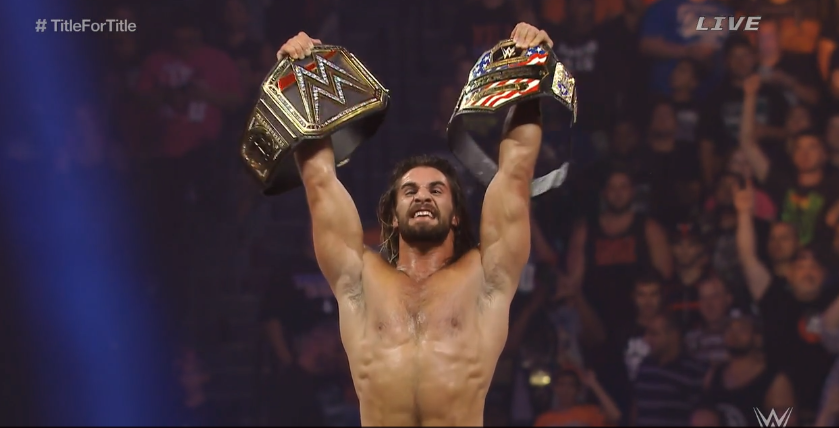 An absolutely incredible match with a finish that will garner a ton of publicity. Really for the building the company mainstream, this finish will get so much attention and Rollins will get a big rub out of this.

There was a ref bump.  Cena hit the Attitude Adjustment on Rollins but no ref. Rollins was pinned for several seconds but when he got up, he gave Cena a knee to the nose and Cena went down  Both were down when Jon Stewart ran in with a chair.  He teased hitting Rollins, but instead, hit Cena in the gut and put the chair on the ground for Rollins to use the pedigree on the chair to win.

Before that point Rollins put on a best in the world caliber performance, doing everything under the sun.  He kicked out of the AA, Cena used the figure four with the tease that Cena would win the title with Flair's big move. Rollins was excellent and really showed why he is the future of the company. 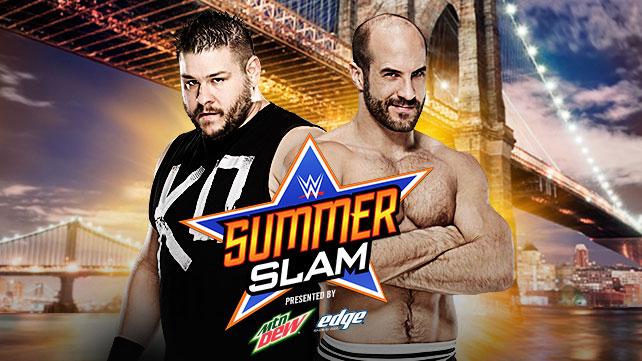 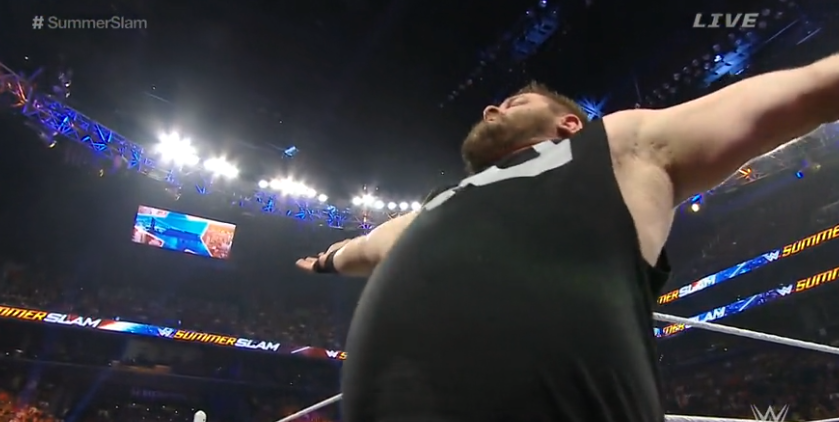 They had a hard time this late in the show as the crowd was waiting for the main event at this point.  But the match was very good from start to finish.  Both looked great here.  Owens won clean with the fisherman buster off the middle rope and a pop up power bomb.  Owens needed the win, but Cesaro needs to have his momentum fed at this point.  Both did dives with Cesaro doing a twisting tornillo dive as well as a giant swing and the sharpshooter but Owens made the ropes.  It was a tough spot on the card for anyone and they did as well in the spot as anyone was going to tonight. 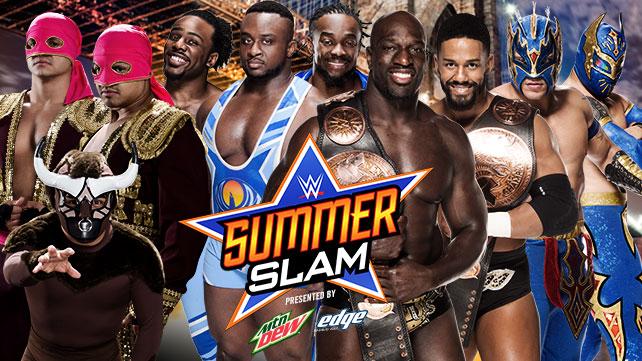 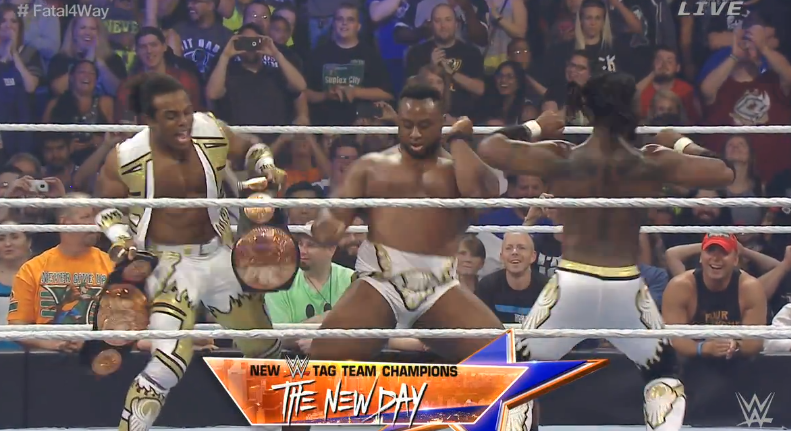 The New Day sang before the match and got over huge as faces with the fans chanting "New Day Rocks" when it was over.  Xavier Woods in particular has a hell of a voice  Match was sloppy early but the last few minutes were good and crowd loved it because New Day won the title.  Kingston & Big E were the team and Woods never stopped talking at ringside.  Kingston pinned one of the Matadores, I think Fernando, doing the stealing the pin after O'Neil used Clash of the Titus on Fernando.  Right before the finish the Dragons were looking at doing a double superplex on Fernando, but O'Neil power bombed everyone. 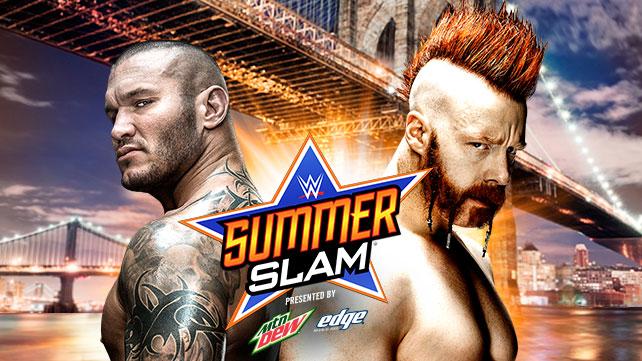 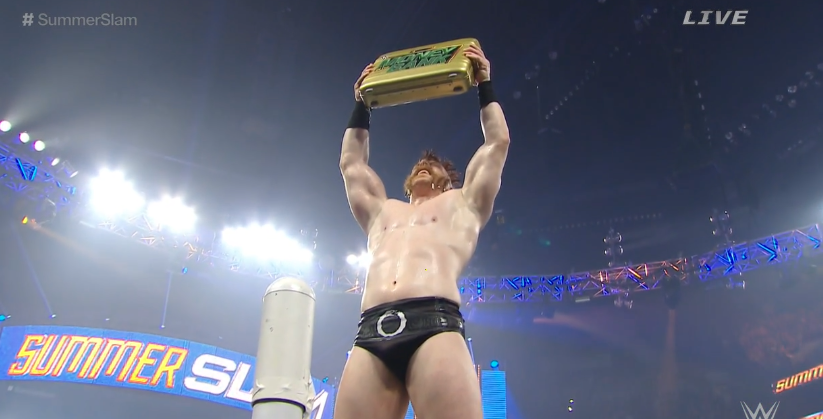 Good match, kind of a surprise how clean Sheamus went over as he got the pin with two Brogue kicks after escaping the RKO.  It looks like the smart money may be accurate here with the long odds that usually end up correct.  They kind of telegraphed it as Orton hit the RKO early but Sheamus rolled out of the ring.  Not as good as their last PPV match. 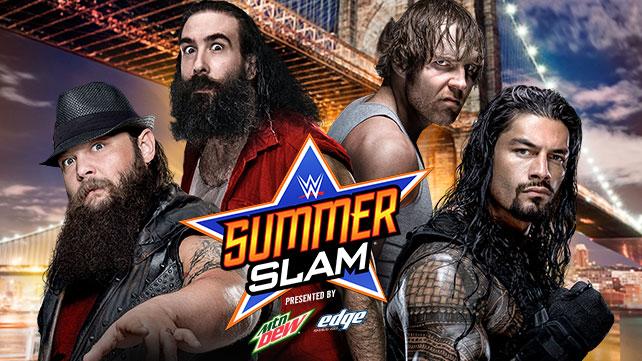 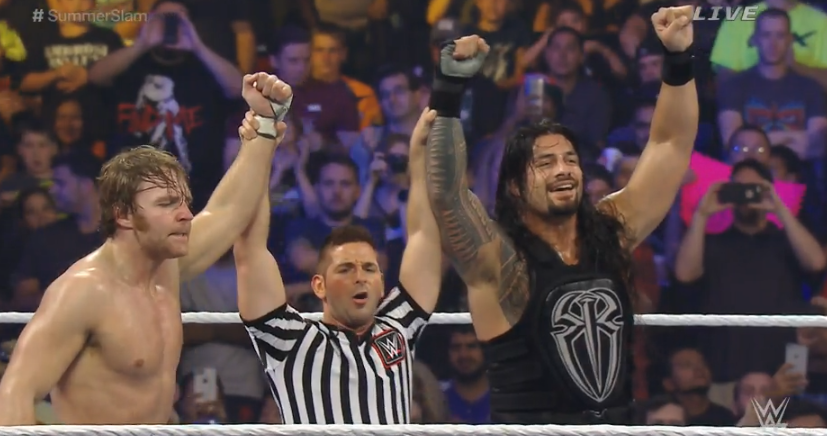 Fast paced with a real hot open with stiff kicks by Harper, a tope by Ambrose, a tope by Harper,etc.  Reigns was superkicked over the table and sold for a few minutes and Ambrose sold.  Reigns made the hot tag and ran wild.  The crowd cheered Ambrose and booed Reigns more than anyone so far on the show.  The finish saw Ambrose use & Reigns use the Road Warrior clothesline on Wyatt, a double team power bomb on Harper, then the Dirty Deeds on Wyatt and Reigns speared Wyatt for the pin.  It felt like a blow-off of Reigns vs. Wyatt. 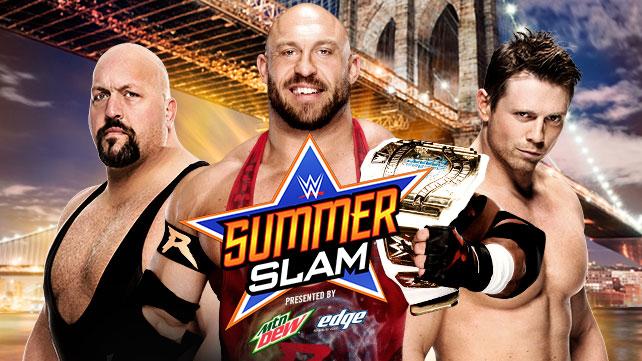 WWE Intercontinental Championship:
Ryback (c) vs. The Miz vs. The Big Show

Ryback retained when Show knocked out Miz but Ryback clotheslined Show over the top and pinned Miz.  Short match but lots of near falls, with Miz kept going for pins on both guys such as when Ryback used the shell shock on Show and when Show hit Ryback with a knockout punch and each time Miz tried to get the pin but they kicked out.  Actually Miz went for about a dozen pins.  The first time people expected a change but after that they really didn't.  Match was nothing special but it was really exactly what it should have been. 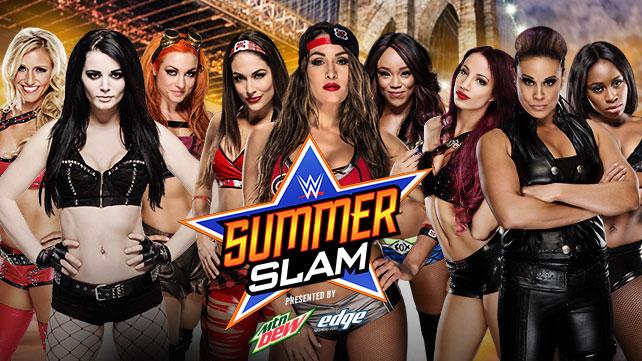 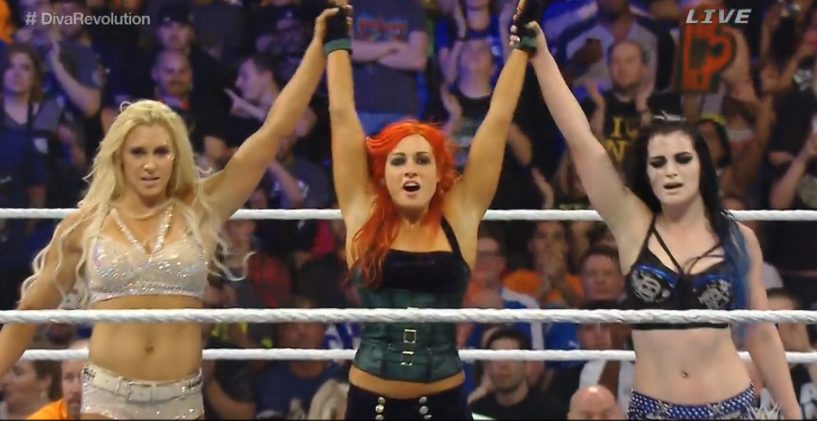 They gave them 15:00 and it was a good match, not like some of the NXT matchds but well above the usual WWE women's match.  Brie pinned Snuka in the first fall with the facebuster.  The crowd booed that because it meant Sasha Banks was gone and she was the crowd favorite.  There was a spot early in the match where Naomi and Banks did flip dives, the Bellas followed with a double tope and Fox took a spill into the pile ending with Fox doing a flip dive onto everyone.  The finish saw Lynch pin Brie with a pump handle uranage.  They pushed the idea that the Bellas now have to be concerned. 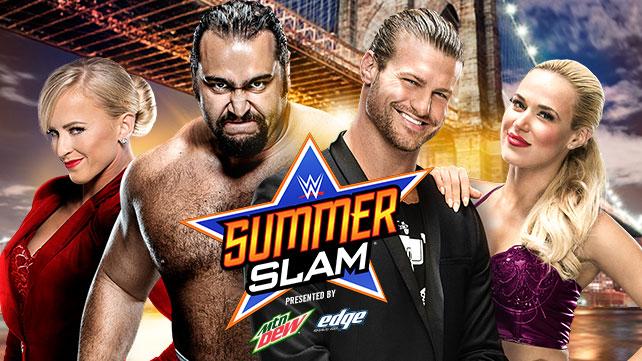 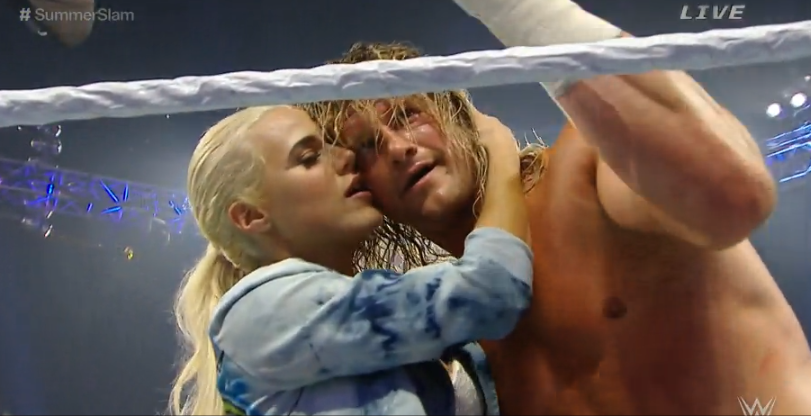 The match ended in a double count out.  Rusev had the accolade on for a while but let it go when Lana distracted him by attacking Summer Rae.  Rusev was then yelling at Lana, which distracted Lana and Summer attacked.  Ziggler had rolled out of the ring and superkicked Rusev.  Rusev was laid out and Ziggler couldn't beat the count.  Ziggler was pounding on Rusev after the match. Summer jumped on Ziggler and Lana made the save.  The women went at it and were pulled apart by the guys.

Crowd booed the double count out a lot, but got into the women rolling around and chanted "Let them go."  Match was okay before the finish.  Rusev did some impressive stuff for his size. 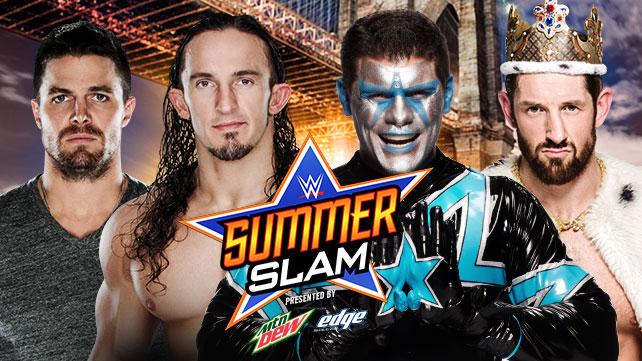 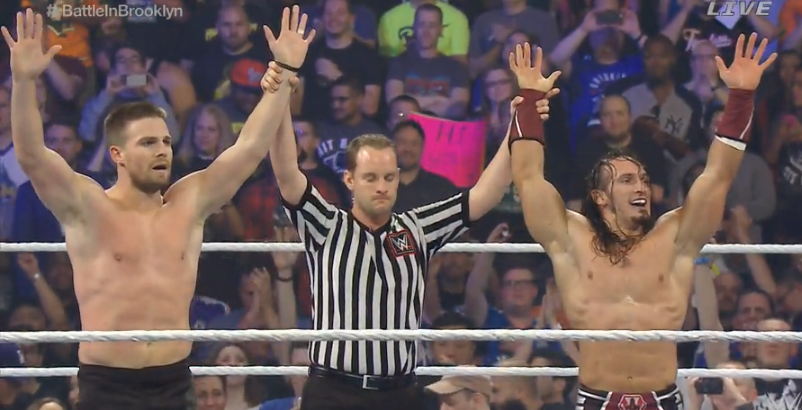 Amell dd a few good athletic things such as a leap frog ea  .  Crowd didn't seen to care about him at first, but they popped pretty big when he did a plancha to the floor onto both heels.  Relatively short match.  Neville pinned Barrett with the red arrow right afer the plancha spot.  Neville was real good when he was in.  Amell was better than he had any business being.  Match was about what you'd think it would be overall.