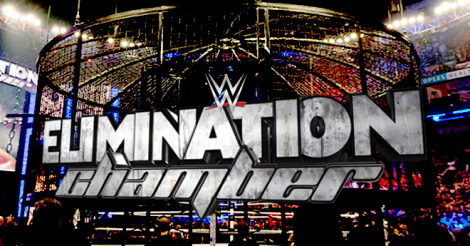 Let's take a look at the WWE network only special that took place last night. It was a good show that will lead nicely into their plans for the Summer.

WWE WORLD HEAVYWEIGHT CHAMPIONSHIP
SETH ROLLINS VS. DEAN AMBROSE
Dave Meltzer: Rollins retained the title via DQ.  They did a Dusty finish.  Ref John Cone was knocked down when Rollins pulled him in the path of an elbow off the top so he was out.  A second ref came out and Ambrose pinned Rollins clean with Dirty Deeds, was announced as the winner nad new champion.  He celebrated for about a minute before Cone got up and Cone said that Rollins was disqualified before the pinfall so the finish was via DQ.  Excellent match before the finish with both pulling out all of their best stuff.  Before the finish Ambrose had done the standing elbow off the top rope to the floor on Kane, Mercury and Noble after he'd knocked them all off the apron.

Everyone is beating down Ambrose after the match until Roman Reigns nailed Rollins with a Superman punch and speared Kane.  Reigns gave a superman punch to both Mercury and Noble and Ambrose backdropped Rollins over the top rope.  Ambrose left with the title belt.
Larry: Honestly, when Ambrose pinned Rollins, I never bought it as the finish and neither did the crowd. This was the absolute example of a Dusty finish, as you knew Ambrose really had no chance of winning, but just the thought made you feel like you may be seeing something special. They let the celebration go on a lot longer that I thought they would, but eventually reality kicked in. Both guys worked their ass off, even the crowd was not really the most receptive to the great work they displayed. Overall, I liked it and it easily sets up a return with a stipulation. 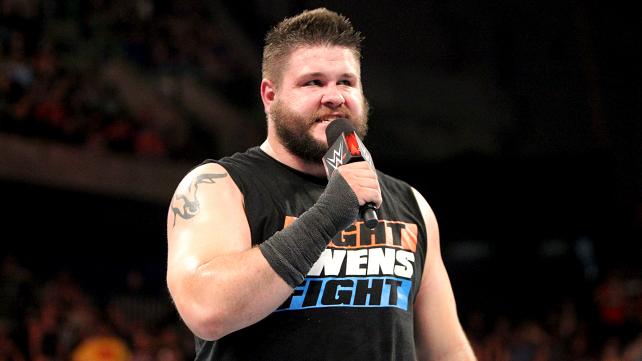 JOHN CENA VS. KEVIN OWENS -  NON TITLE CHAMPION VS CHAMPION
Dave Meltzer: Owens won clean with a pop up power bomb. They're playing it like it was the most monumental win ever as a guy in his first match he pinned Cena.  Excellent match.  About 21 minutes of kicking out of near falls with both guys doing everything they had.   Cena had kicked out of the pop up power bomb earlier as well as kicking out of Owens doing an Attitude Adjustment.  Owens kicked out of the Attitude Adjustment, the leg slice off the top rope as well as the springboard stunner and also kicked his way out of the STF.  They did the right thing to make a superstar in one night.  Crowd was pretty hot for the match.
Cena left the ring and left the ring to Owens who said now everybody knows who Kevin Owens is.  He told Cena that he now has some veteran advice, he told him it's time for Cena to go, because his time is up and my time is now.

Larry: Can't lie, this shit was great. What a match. Honestly, they could have given Seth the night off and saved his match with Ambrose, cause this should have closed the show. Nobody could follow it. What a performacne by both men, and I give Cena props for the clean lost. If you know me, you know I love Kevin Owens back from his Kevin Steen days in ROH, so watching this all that more gratifying. To see a guy who has always been told he's too fat and doesn't fit the mold of the guy Vince will push, come out on the big stage and kick the door in. Then the excellent promo was just icing on top. Greatness. 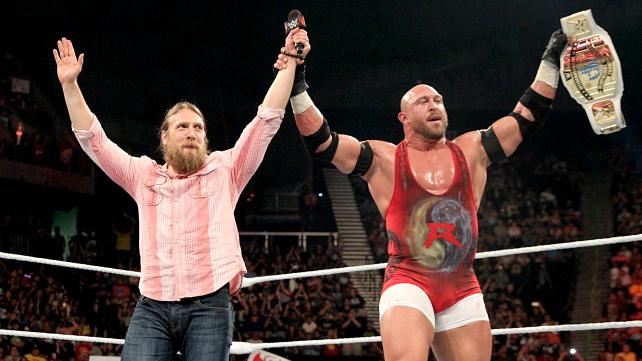 INTERCONTINENTAL CHAMPIONSHIP ELIMINATION CHAMBER MATCH
King Barrett vs Sheamus vs Dolf Ziggler vs RTruth vs Ryback vs Mark Henry
Dave Meltzer: Ryback won a long match clean with a power bomb and shellshock on Sheamus when they were the last two.  Good match at times, dragged at other times.  Daniel Bryan was at ringside and presented the belt to Ryback.  Bryan said he thought Ryback deserved it and led "Yes" chants and they shook hands.  Ryback said that Bryan was an inspiration to him and they raised each others arms.R-Truth pinned Barrett first with the lie detector.  Ryback pinned  R-Truth with the shell shock.  Sheamus pinned Henry with the Brogue kick and the Sheamus pinned Ziggler with the Brogue kick.  Sheamus and Ryback went about five minutes as the last two.  A lot of bumps on the mesh but not a lot of crazy moves.  The storyline stuff was that the pod was broken that Henry was in early when Ziggler went through it so he started early which led to cutting time down, although they still went too long.  Shamus was locked in his pod for three minutes after he was supposed to be in but he was able to use a cross to unlock the door that was jammed supposedly.
Larry: I felt the chamber was boring. I just wasn't excited or really entertained about anything that happened. The lineup was uninspiring and the outcome was met by an apathetic crowd. Meh. 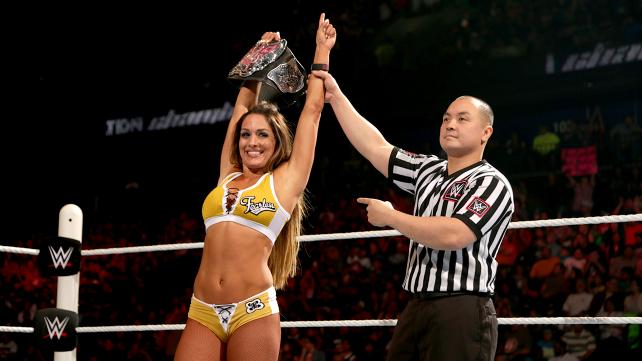 DIVAS CHAMPIONSHIP
NIKKI BELLA VS. PAIGE VS. NAOMI (TRIPLE THREAT MATCH)
Dave Meltzer: Nikki retained with the rack attack on Naomi after Naomi had botched a reverse huracanrana on Paige.  Crowd wasn't much into it.  The attempt was to do a really good match but a lot of it didn't click.  Brie and Tamina Snuka were banned from ringside.
Larry:  You want me to talk about the Divas, I will talk about the Divas. I'm not understanding what is the issue they have with Naomi. The girl is athletic, phat in all the right places, can work better than most, and can handle the mic better than almost any of the Divas on the roster. But she has yet to crowned champion. And not only that, she takes the fall in this match where they could have kept her strong by pinning Paige. I just don't get it. Nikki Bella is dating the right guy, I get that part, and she looks good, no doubt, and she even has improved in the ring. But at some point, why not feature someone different. 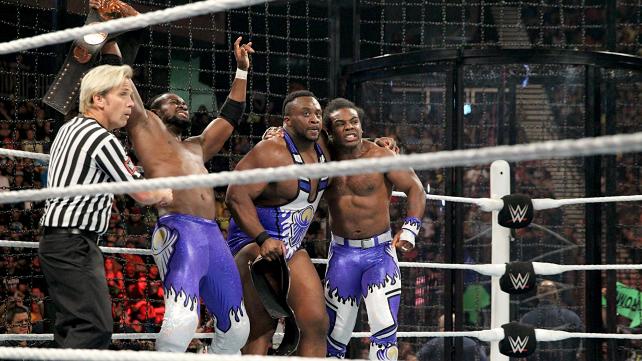 WWE TAG TEAM CHAMPIONSHIP ELIMINATION CHAMBER MATCH
NEW DAY VS KIDD & CESARO VS LOS MATTADORS VS LUCHA DRAGONS VS PRIME TIME PLAYERS VS THE ACENSION
Dave Meltzer: Long match ending when O'Neil had Kingston in the air and Big E chop blocked him and all three New Day members pinned him when they were the last two teams.  There were a lot of cool spots, and a good match but never really broke into the great realm.  It started with The Ascension vs. Lucha Dragons.  Next in were Kidd & Cesaro.  The Ascension beat Los Matadores with the Fall of Man and then they beat the Lucha Dragons pinning Sin Cara.  The Ascension was next out.  Young pinned Cesaro with a schoolboy which left us with the PTPs and New Day.
Larry: I liked the early part of the match. Great action out of the Lucha Dragons and some cool spots with Cesaro. But once he and Kid were gone, the match lost me. Moving on.... 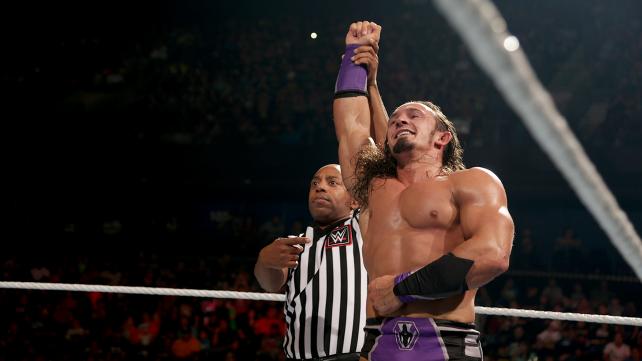 NEVILLE VS. BO DALLAS
Dave Meltzer: Good match ending with Neville winning with the red arrow after an enzuigiri.  Dallas did a good job facially as well a with his basic work.  Neville almost can't help but have good matches.  Highlight spot was a mooonsault to the floor by Neville.
Larry: No reason for Neville to be on the Smackdown or pre-show match on the PPV instead of in the Chamber match. They could have used his high flying and athleticism. This match was solid, but was in teh toughest position of any match in a while. They had to follow Cena vs Owens. Bruh. To say the crowd was the most quiet I have ever heard for a Neville match I can recall would be an understatement. But he hit his move and won. Good for him.