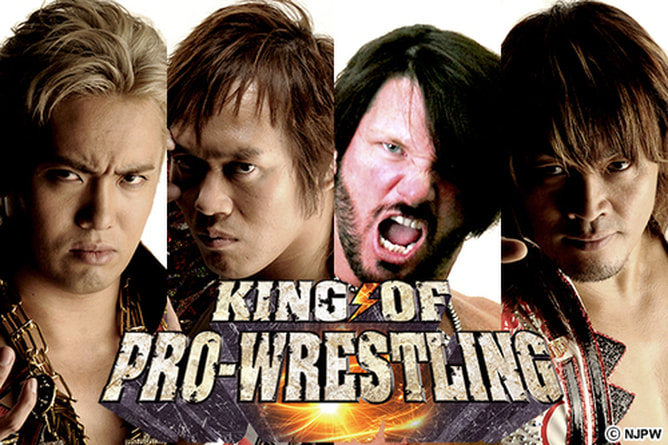 New Japan Pro-Wrestling (NJPW) was founded by wrestling legend Antonio Inoki in June 1972. Its signature event has been held annually on Jan. 4 at Tokyo Dome since 1992, but in 2007 they dubbed it “Wrestle Kingdom” after a video game.

For fans of WWE, Japanese wrestling might take a little getting used to. The product is treated as sport and is stiff as can be. The difference comes in the presentation — puroresu takes itself way more seriously.

During large shows, the thousands of fans in attendance go long stretches without making a peep. Individual voices can be made out, ringing through the otherwise silent arena. It’s not that the crowd is disinterested in the action. It’s the contrary: They’re attentive, drinking in every detail of the wrestlers’ performances. Soon enough, after an especially stiff slap or a chain of reversals and dodges ending in a stalemate, the crowd will come to life, letting out a collective “Ooh” and a round of respectful applause. Then it’s back to near silence as they wait for the next praiseworthy moment.

As a match wears on and intensifies, those quiet stretches become shorter and eventually disappear, with the audience now loudly behind the performers’ every move.
There’s an intense mutual respect between the audiences and the companies. NJPW, the top wrestling company in Japan and the second most successful in the world, trusts its audiences to pay attention, to appreciate the emotion on a wrestler’s face or subtle callbacks to past contests between bitter rivals. They do pay attention, and their reward is the best pro wrestling on the planet: dramatic, realistic matches worthy of scrutiny and even quiet observation.

With its dedication to making things feel important, stiff physicality, and above all else, excellent wrestling, NJPW has been building a rabid fan base outside its home country. I have been a fan for many years and am happy the compnay is expanding into the U.S, because its simply better than anything else in wrestling here.

NJPW’s commitment to a genuine and grounded brand of professional wrestling is referred to as "strong style". It’s meant to make the wrestling look as real as possible, emphasizing hard-hitting chops and martial arts kicks alongside submission holds where wrestlers wrench on arms, legs, and necks.

The surrounding presentation of an NJPW show is more sports-like as well, with post-match press conferences and elaborate photo-op-ready trophy ceremonies. NJPW is covered by the media and consumed by fans like a real sport.
The stories it tells aren’t based on soapy melodrama outside the ring. Things don’t always boil down to “good guy vs. bad guy.” Many perform under their real names, and their motivations hardly ever go beyond “I would like to have your championship belt” or “I want to prove I’m better than you,” just as they would in any other sporting event.

As with all the best professional wrestling, NJPW’s real storytelling happens inside the ring. It comes from the strategies and mannerisms of the wrestlers.
Matches hardly ever end in disqualifications or involve outside interference or other hackneyed chicanery. These are real bouts and wins and losses matter. They’re written into the New Japan history books, along with memorable details from each high-profile encounter, to be referenced and played upon in later matches.
But that’s not to say NJPW is completely serious. Any good fight promoter knows that two generic guys in black trunks knocking the stuffing out of each other gets old after a while. NJPW has changed with the times, incorporating a sizable shot of American showmanship into its matches. Events feature loud rock music and light shows; wrestlers have adopted outrageous personas and are decked out in colorful costumes, often taking up the microphone to belittle opponents.

If you are looking into getting into New Japan Pro Wrestling, don't be intimidated by the language barrier. The stories are told with the action in the ring and the excitement of the crowd and enthusiasm of the announcers only adds to the spectacle. I wish I couldn't understand Michael Cole, JBL and Booker T most weeks on RAW. Smh.

New Japan Pro Wrestling matches are very easy to follow, even if you don’t understand Japanese.  Matches can be won by pinfall, submission, count out, or by foul (disqualification).  All matches are subject to a time limit in New Japan:

You’ll occasionally hear the ring announcer say something in Japanese over the house microphone.  That is just them announcing how many minutes have passed, which they always announce in five minute intervals.

Count-outs are not a standard 10 count like in the WWE.  In New Japan, they use a 20 count.  This is made really easy to understand because they count in English. Submissions are pretty rare in New Japan, despite how often submission holds are used.  They use the tap out, just like they do in the U.S.
Titles -

IWGP Heavyweight Title: IWGP stands for International Wrestling Grand Prix.  Antonio Inoki won a tournament in 1987 to be the first champion.  The current champion is Kazuchika Okada.  He won the title on 4/7/2013 at Invasion Attack.  His current title reign is the 7th longest of all time and his 8 title defenses is the fourth most in one title reign.  This is the top championship in New Japan Pro Wrestling…however…

IWGP Tag Team Titles: These are the oldest active titles in New Japan, created back in 1985.  So far in 2014, the Tag Team titles has been placed as the match underneath the main event in two different iPPV’s.

IWGP Junior Heavyweight Tag Team Titles:These titles also have a 220 pound weight limit.  These titles were created in 1998.  Typically, on shows where these titles are defended, it will serve as the opening match on the show.

NEVER Openweight Title: This is an interesting one.  The INTENT of this title was to serve like the NXT Championship. However, that didn’t happen.  NEVER hasn’t run a show since the title has been created.  Masato Tanaka won the first title in 2012 and it was typically defended lower on the card on New Japan shows.  In the past six months, it has been defended higher on cards.
Tournaments -

G1 Climax: This is THE tournament in New Japan.  Held in August, the traditional tournament involves a group of wrestlers separated into two pools.  Each wrestler wrestles every other wrestler in their pool.  The two wrestlers that win their respective pools then face off in a singles match to determine the tournament champion. Last year, there were 20 guys in the tournament.  Each guy wrestled 9 matches over 11 days. The winner of the tournament receives a shot at the IWGP Heavyweight Title at Wrestle Kingdom.  Between the G1 in August and Wrestle Kingdom in January, the G1 winner has to defend their right to the title match.

World Tag League: This is the tag team equivalent of the G1.  The tournament is currently held in December every year.  The teams are broken into two pools, with each team facing every other team in their pool.  The difference from the G1 is that the top two teams from each pool advance.  In the Semi-finals, Pool A Winner vs. Pool B 2nd Place and Pool B Winner vs. Pool B 2nd Place, with the winners of those two matches wrestling in the finals later that night.  The winning team receives a shot at the IWGP Tag Team Titles at Wrestle Kingdom.

Best of the Super Juniors: This is the annual Junior Heavyweight Tournament.  It is held every year in early June.  This tournament is held in a pool format, with the top two wrestlers from each pool advancing to the Semi-finals.  The winner of the tournament receives a shot at the IWGP Junior Heavyweight Championship.

Super Junior Tag Tournament: This has been held three of the last four year, so I think it is an annual tournament now. The tournament has always been an eight team, single elimination tournament with the winners receiving a shot at the IWGP Junior Heavyweight Tag Team Championship.