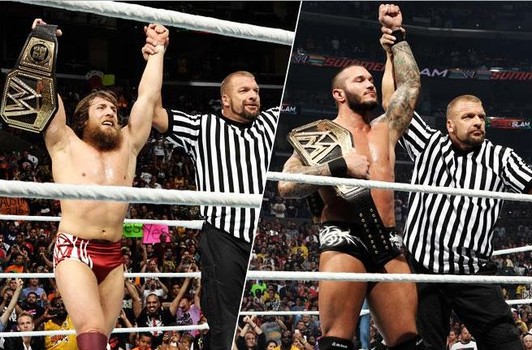 The Broken Road to Wrestlemania: Part 3

In the summer of 2013, as part of an attempt by WWE to give John Cena a legendary title reign, they decided to to have him wrestle Bryan Danielson, known in the WWE as Daniel Bryan, so Cena could have a legendary, "Match of the Year" caliber match.

A story line is formulated that allows Cena to pick his Summerslam opponent. At the time, Bryan was the hottest wrestler in the company and his "YES YES YES"  was popular in every building all over the country. The WWE tried their best to ignore the crowds support of Bryan, but finally they gave in.

In story line, Cena chose Bryan to be his opponent and in reality, originally, Cena was supposed to win at Summerslam. But prior to the match, Cena badly injured his arm and the call is made that He has to take time off for surgery. So left with no option, they decide to run with Daniel Bryan, who has a ton of momentum, as top baby face, and because Brock Lesnar and CM Punk are involved in their own story line at the time.

Daniel Bryan cleanly beats John Cena to win the WWE Championship  at Summerslam...... only to lose it moments later after a pedigree from HHH, and Randy Orton cashes in his Money in the Bank title shot.

Bryan vs "The Authority"

Now one may look at this scenario and say, great. You have the makings for a great story to tell. The valiant Daniel Bryan fights his way to the main event, and captures the WWE title, only to be screwed moments later by the big bad villains. Great foundation to build on right?

Well, any other time in wrestling, you would be right. They have a ready made story line handed to them, and all its needed was a few wrinkles thrown in, and some time to grow to the culmination at the biggest show of the year, Wrestlemania 30. But this company had other plans and God forbid that they adjust to what the people want.

Hell bent on staying with direction of Cena vs Orton, you know the match we have seen 1 million times over the last 10 years, they had to get the story back in that direction.

So for he next few months, Bryan just failed. He was booked terribly in his feud with Orton and the McMahon family, constantly being screwed out of the title, beaten down at the end of 7 TV shows in a row, and so on. Buried.

He never won the title, and eventually he was out of the title picture all together. He was sent to the mid card, but the live crowds loved him so much that they completely revolted.

The Crowd Fights Back

A main event talking segment about Orton and Cena unifying the world titles with former champions in the ring was completed hijacked by the Seattle crowd chanting for Daniel Bryan. The fans did not care about Cena and Orton, they wanted Bryan.

So what was the company's response? In an attempt to smother his momentum even further,  they turned him HEEL!!!

Bryan joined the Wyatt family for two weeks and the crowd crapped on it so bad that Vince was forced to pull the plug on that stupid angle. It was pathetic. The original plan was for this angle to continue for two months, and the crowd forced it off television in 2 weeks. So maybe Vince was paying attention..... naw.

You know cause in this company, unless it's Vince's idea, it will never work.

At the Royal Rumble, Vince's genius plan was to take the hottest baby face in the company, put him in the opening match against Bray Wyatt, beat him clean, and then move on with the show.

Well, the crowd went on to completely bury the entire show. In all my years of watching wrestling, I had never seen respond with such disdain towards a product they were presented with.

In the Unified World title match between Orton and Cena, the crowd treated them like they were not even in the ring. They chanted for Daniel Bryan, they completely trashed the two wrestlers in the ring.

In the Royal Rumble match, the crowd chanted for Bryan's entrance to occur, only to be outraged when they found that not only was he not going to win, but he wasn't even going to be in the match.

The crowd boo'd Rey Mysterio at number 30, like he the number 1 villain in all of wrestling. They boo'd the returning Batista, who was supposed to be a fan favorite. They were pissed. But it wasn't about booing the performers, they were booing Vince McMahon and his direction.

The crowd had seen enough of "The Authority" forcing whomever they deemed was acceptable for the fans to like down their throats. They wanted Daniel Bryan, and they were going to force Vince to change his plans.

Check back tomorrow for part 4 of the series as we continue to look at the broken Road to Wrestlemania 31.