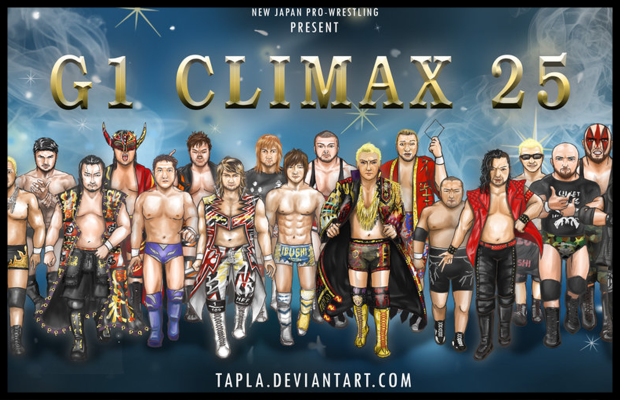 This year’s G1 has been the largest tournament in the history of New Japan Pro wrestling. All together, there will be 19 shows airing throughout July and August. Lets take a look at the action that has taken place over the last week.

Good for what it was. Yano stalled a lot early. He tried to jump Gallows after a hand shake spot but Gallows no sold it. Mostly comedy spots but Yano’s able to work them really well here. It wasn’t the best match workrate wise but it was fun. Yano took out Hall and Tonga from the apron, but Anderson comes in as he and Gallows give him the Magic Killer and Gallows pins him.

Another pretty solid bout. Nothing fancy, as most of the match was just back and forth brawling. Makabe did take it to the outside early, but most of this was in the ring. At one point it seemed like he was working over Tenzan’s eye. Tenzan kept taking Makabe’s offense until Makabe pinned him with the king kong knee drop.

These two exchanged some great offense in the early minutes of the match, including some great mat wrestling. Crowd is SUPER into this match, it was insane. Ibushi did Shibata's penalty kick at one point that Shibata did not take lightly and returned with one of his own. Just an insane match with incredible heat and super stiff offense. There was one period where they were constantly kicking out at one and just going insane with offense. This is a surefire match of the year candidate and required viewing if you have New Japan World. They were exchanging offense when finally Shibata slapped him HARD, put him in the sleeper and pinned him with the penalty kick.

Good match; it’s becoming more and more clear that Tanahashi’s one of the best ring generals in pro wrestling right now. There was a ref bump at one point that caused Hall and Tonga to come in and interfere. Fale took out one by accident and Tanahashi took the other out and sent Fale to the outside where he gave them all the big high fly flow on the outside. Tanahashi came back with two high fly flows but the Bullet Club pulled the referee out. Fale tried for the Bad Luck Fall twice but Tanahashi managed to escape both times, but did not escape the grenade. Fale went to the top rope, nearly tripped but came back and hit his own high fly flow for the win.

The crowd was dead for most of this match. I’m guessing it’s due to the heel/heel dynamic, and no one wanted to cheer either guy. Nothing wrong with it early, as they were wrestling a good technical match, going back and forth. The crowd started to come back and chant for Naito for whatever reason. They were going back and forth after Naito spat at AJ. He hit a pele kick and went for the bloody sunday DDT but Naito countered and hit his new finisher, the sliced bread #2 into a reverse DDT that he calls Destino for the win. Just good, not great.

This was ok, but nothing special. Yujiro just lacks in the in-ring finesse others have in spades here. Crowd was really not into this at all until Kojima started making his comeback. He laid out Yujiro at one point with a DDT on the apron. Yujiro fired back with a buckle bomb. Kojima had the win with the lariat but Hall broke up the count. He took care of Hall then went back to Yujiro. He went for another lariat but Yujiro blocked it, gave him a low blow then pinned him with the Miami Shine. This was fine, and since Yujiro’s on the lower end of the totem pole right now it’s the right finish to do based on where they’re going in this tournament.

Pretty good, but nothing too special. Anderson worked a lot on Nagata’s ribs. He made a comeback and got the white eyes armbar in but Anderson escaped. Anderson tried for the gun stun but Nagata avoided it. Nagata grabbed him for the backdrop suplex but Anderson dropped him with a gun stun in mid motion and pinned him.

Crowd was super into this from the start, of course behind Honma. Elgin continued to look good, showing impressive work including a deadlift suplex into a falcon arrow off the top rope and a Oklahoma stampede. He went for the buckle bomb but Honma landed on his feet and surprised him with a kokeshi. He went for the top rope variation but missed. Amazing finish as Elgin hit him with the pop up powerbomb, a buckle bomb then a spinning powerbomb for the pinfall. Really good stuff towards the end.

Nakamura’s elbow looked very swollen, even in bandages. This was really just a match until towards the later stages of the game, just back and forth stuff that wasn’t at all that interesting. It picked up when Nakamura hit a boma ye and Ishii laid out Nakamura at one point with the sliding D. Nakamura hit another boma ye for a surprise nearfall. Ishii fought back but Nakamura put him in the armbar, then hit a falcon arrow then landed one more boma ye for the win.

Okada did a big leap over the guardrail and onto Goto at one point that sent them clear into the audience. They had a really good sequence of back and forth roll ups as well. Okada went for the Rainmaker but Goto countered with his knee neckbreaker. Shouten kai attempt but Okada blocks it and escapes. He deadlifted him with a German suplex but Goto came back and laid him out with a lariat. Another rainmaker attempt but Goto dodged, headbutted him twice then finished him off with the shouten kai to win.

Very good match. Ibushi missed his trademark moonsault at one point and took a spectacular bump on the outside, rolling around and landing near the barricade. Great exchanges including Ibusi doing his flurry of offense, including the mongolian chops. Tenzan tried the anaconda buster but Ibushi dodged and landed on his feet. He made a comeback then pinned him with the phoenix splash. Ibushi looked great and Tenzan chose his spots well which made this a very well worked match.

This was kept rather short, which was probably for the better the way this was going. Fale dominated a lot of the match after throwing Shibata on the guardrail. Fale picked him up like he was going to finish him off but Shibata floated over with a sleeper. Fale tried to fight it off but he fell to the floor, then Shibata came back with the penalty kick for the win. Cool finish, uninteresting match.

This was a good storytelling kind of match. Gallows, who is in fact way bigger than Styles, dominated the match from the start. AJ eventually started to wear him down, eventually at one point hooking Gallows’ leg and rolling into a calf killer. Gallows went for a back body drop but AJ floated over, landed on his feet and planted Gallows with the Bloody Sunday DDT for the win.

Awesome match. Naito took an exceptionally long time taking off his outfit, and eventually Makabe got tired of his antics and jumped him. Naito reversed it and sent him to the barricades then started to take off the outfit. Very good back and forth match. Makabe missed the King Kong knee drop. Naito tried his flash bridging pin twice but it didn’t work. Crowd very into the nearfalls. Naito was sent to the turnbuckle where Makabe was going to the knee drop again. Naito’s head was rammed into the post twice, busting him open, then Makabe landed the knee drop and pinned him.

Good match for what it was. Yano in the past year has really excelled at working his own comedic style and turning it into, at the very least, an entertaining match. Tanahashi went to splash Yano on the outside but Yano dodged and Tanahashi crashed into the post. Yano got the heat by mostly using the exposed turnbuckle pad. Tanahashi went for the high fly flow out of the ring but Yano ran under the ring, only for Tanahashi to baseball slide him and give him the high fly flow anyway. It was a match where Yano was doing his usual tactics but nothing was working, even after Tanahashi missed the senton after doing Yano’s taunt. They did a ref bump spot as Yano tried to use the chair but Tanahashi got the better of him and laid him out with the slingblade on the chair, then followed with a high fly flow for the win. It seems like Yano’s cut from a few days ago was reopened towards the later stages of the match.

Good match. Elgin was the star here again as he carried Yujiro to a really good back and forth match. Yujiro’s heat segment again was less than interesting, but when Elgin made his comeback, people were into it. Yujiro suplexed him on the outside and was going for the Miami Shine but Elgin blocked it, gave him the buckle bomb then followed with the spinning powerbomb for the win.

Very good match. Most of it was good back and forth between the two. Crowd was into it, but not at the level I thought it would be. Finishing sequence was pretty hot, though. Honma ate a lariat but got up very quickly and was making a comeback. He tried for a kokeshi, but between the kokeshi and a lariat, Kojima’s lariat won, then followed with another for the win.

Ishii dealt out chops while Nagata kicked him in the chest as hard as he could. Nagata controlled a lot of the match, including giving him an exploder suplex into the turnbuckle and even dealt out an ego trip. They had a slap contest that ended when Ishii headbutted Nagata hard in the face and hit a sliding D for a nearfall, then pinned him with the brainbuster. Great match, these two have always had great chemistry. Not as good as their match from last year, but still great.

This was good, but not great. The crowd were interested at times, and disinterested in others. It created the type of match where everything technically was good, but at the same time felt just kind of there with an uninterested crowd. There did some nice reversals near the end with Okada reversing a gun stun and laying Anderson out with the tombstone, then pinning him with the rainmaker. Finish felt rather anticlimactic as it seemed like no one thought the finish was coming yet.

Crowd finally started to pick up for this one in the middle of the match. Really picked up once they were going for near falls. Nakamura went for the boma ye but Goto blocked him and hit the reverse neckbreaker. They were exchanging back and forth maneuvers when Nakamura trapped Goto in the spinning armbreaker and actually submitted him in a big surprise. They’ve had better matches, but this was a perfectly acceptable main event. 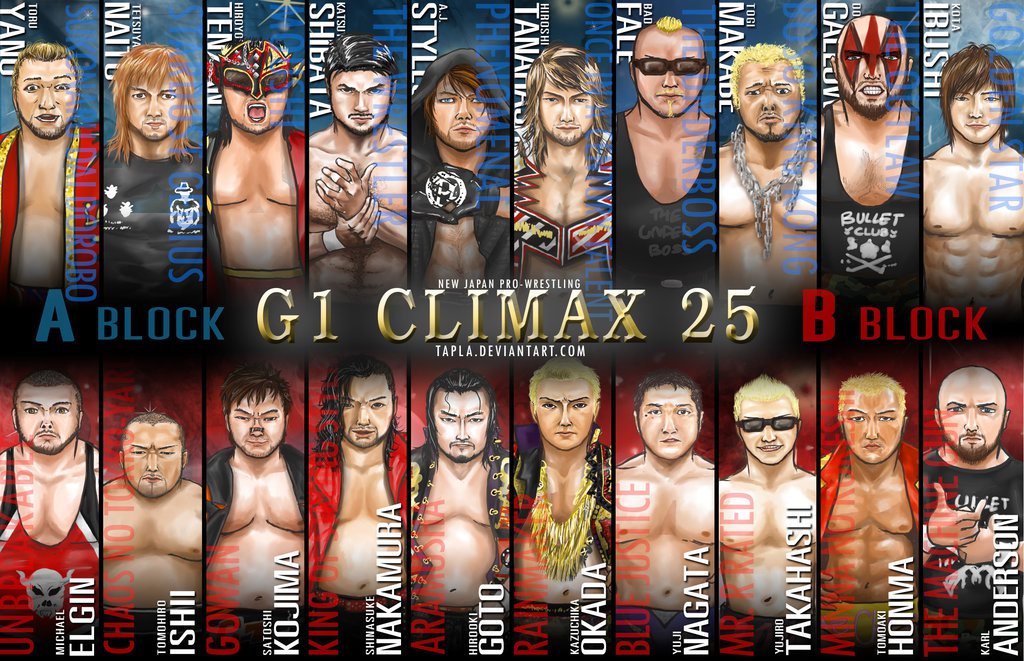