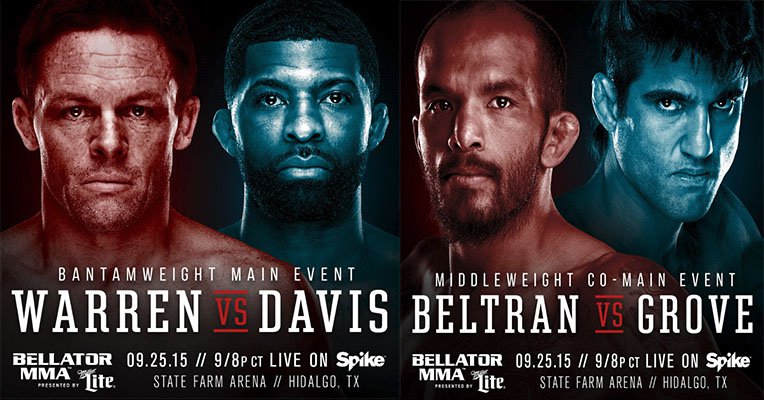 ​Bellator 143: Warren vs. Davis from the State Farm Arena in Hidalgo, Texas. The event washeadlined by a bantamweight title eliminator bout as former Bellator Bantamweight Champion Joe Warren takes on L.C. Davis. The co-main event is a middleweight contest between Joey Beltran and Kendall Grove. 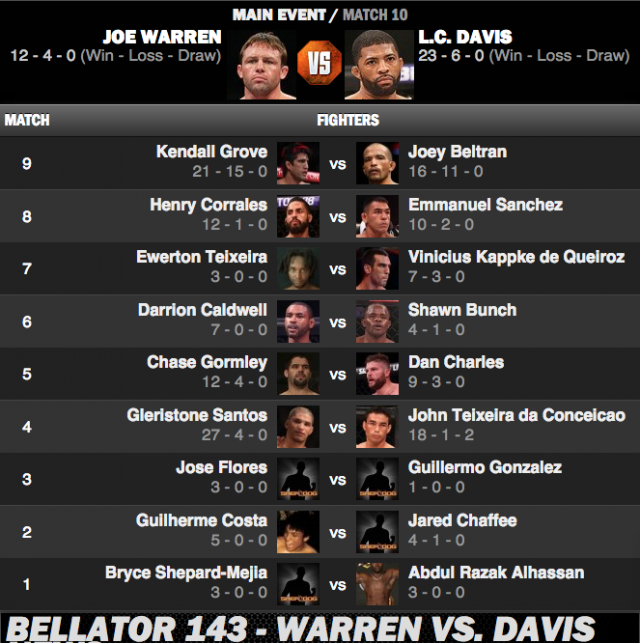 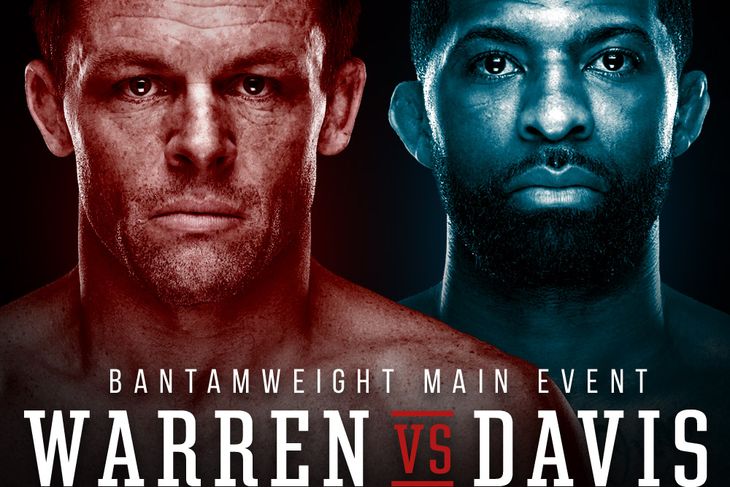 They aired the walkouts but nothing special. Warren gets a title shot with a win and could be done with a loss as this is the last fight on his contract. John McCarthy is the ref. He stopped the fight where Warren lost the title by verbally submitting where Warren took a tantrum afterward. Warren controlling the action early and gets a takedown 1:15 in. Warren just holding him down and doing just enough to avoid a standup. Warren postures up at 3:15 to land some hammerfists and then right back into Davis' guard. Davis almost made it to his feet at 4:15 but Warren dragged him right down again. Crowd starting to boo. 10-9 Warren unless you're going with the alleged "new scoring" and then it's a 10-8

Davis hit with an accidental eye poke to start the round. Sean Grande does the Michael Cole fake laugh when John McCarthy asks Davis if he can see and then if he's ugly. Warren takes Davis down immediately on the restart but Davis to his feet right away. Davis pressing the action in this round, connecting with more punches. Warren went for an angle slam at 1:45 but Davis slid off his shoulders. Warren with a takedown at 2:45. Davis landing light punches to the head and body from the bottom as Warren tries to pass. Davis to his feet but Warren takes his back and drags him back down with a Greco Roman throw. Warren back into top position at 4:15.  10-9 Warren 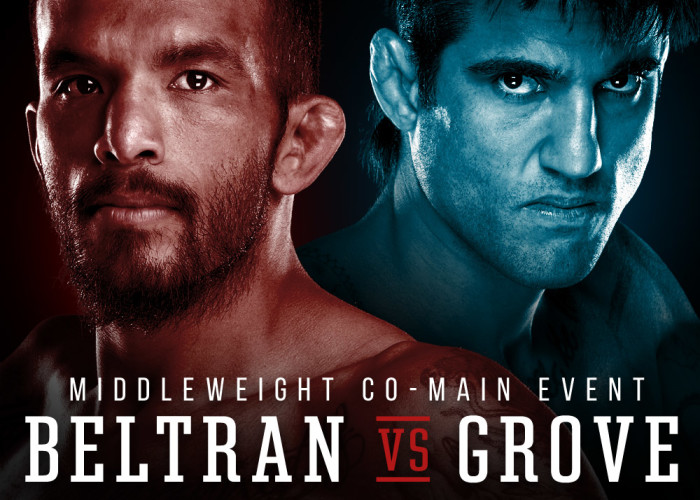 This could be a loser leaves town match with Beltran having lost 3 of his last 5 and Grove 2 of his last 3. Both likely have bigger price tags than the majority of the roster. Hard to believe Beltran was a heavyweight not all that long ago. Kerry Hatley is the ref, so expect some shenanigans.

Grove looks like the one who would be two weight classes above Beltran as he seriously looks like he could trim down to Welterweight, if not lightweight. Both guys keeping their distance early on. Crowd turning on the fight halfway through the first as they may not have landed 10 punches between them. Grove pushes him to the cage and lands a nice punch combo at 2:45. Announcer tonight are talking a lot about The Ultimate Fighter on Spike, in this case relating it to Grove. I find that interesting for some reason. Way more interesting than this fight. Beltran seems to be the aggressor so may be winning the round but neither guy has done much of anything. 10-9 Beltran, I guess.

Sean Grande called that an entertaining first round in his very best Tony Schiavone impersonation. Strikes landed were 27-8 for Grove in Round 1. They threw almost the same amount though. They were actually debating whether that first round could be 10-8 Grove. WHAT? Beltran with a takedown at 1:45 but lets Grove up right away. Nice punch exchange at 2:15. Beltran starting to control the cage at 2:45. Grove bleeding from the mouth after  the punch exchange. Beltran starting to land leg kicks at will. Grove just keeping away and throwing from distance. Grove's leg starting to buckle every time he gets hit at the end of the round. Crowd booing again as Grove is essentially just running away. 10-9 Beltran

Grove landing from distance at the start of the round. Grove also throwing leg kicks of his own. Grove with a nice kick/punch combo at 1:30 that backs Beltran up. But Beltran still basically chasing him around the cage. Beltran gets inside the range and lands a nice combo at 2:15. Grove runs away again. Grove knocks Beltran down with a punch out of nowhere and he was out but got  one more punch in before Hatley stopped it. Nice finish but terrible fight. 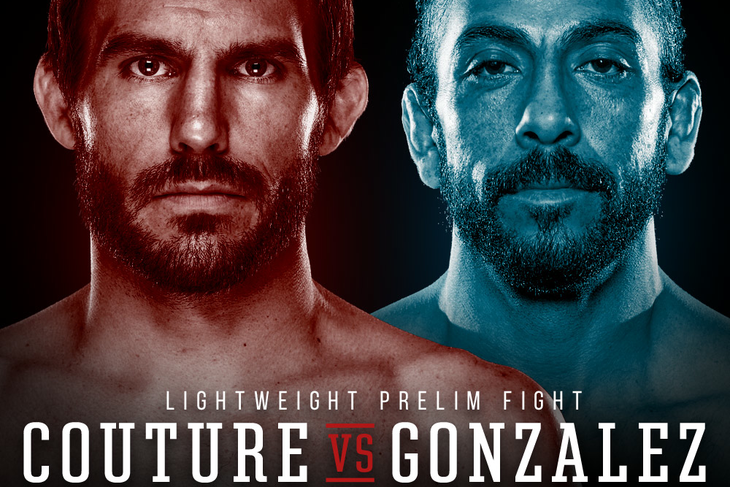 Both guys are considered prospects but have losses to former Bellator champions. Randy Couture was just shown on camera at ringside in the background but not identified. His son was scheduled to fight in the prelims but his opponent missed weight by SEVENTEEN POUNDS.

Corrales getting the better of the standup early on, opening up a cut on the forehead of Sanchez. Sanchez with a flying triangle at 2:15 and it seems in pretty tight. Sanchez grabs an arm in an attempt to tighten the grip but Corrales escapes and ends up in top  position. Sanchez escapes and to his feet at 4:15. Sanchez' face is all bloody but he's winning the round. 10-9 Sanchez

They are going to re-air the Shawn Bunch/Darion Caldwell fight from the prelims. That was a great performance by Caldwell. Sanchez backs up Corrales with a punch/knee combo and takes him down at 1:30. Corrales to his feet at 2:30. They are going to announce Bobby Lashley's opponent for Vengeance later tonight. Standup again is pretty even. Corrales with some bruising and swelling under his right eye. Sanchez takes Corrales' back standing and takes him down right before the end of the round and gets a rear naked choke right at the end of the round. 10-9 Sanchez

Sanchez controlling the pace early in the round. Punches are coming much slower on both sides now. Sanchez connecting with a lot of kicks to the body and head while Corrales is almost exclusively punching. Corrales with a nice litle flurry of  punches at 4:00 and then defends a takedown attempt by Sanchez. Sanchez got a takedown right at the end of the round. Close but probably Sanchez' as well. I've got it 30-27 Sanchez