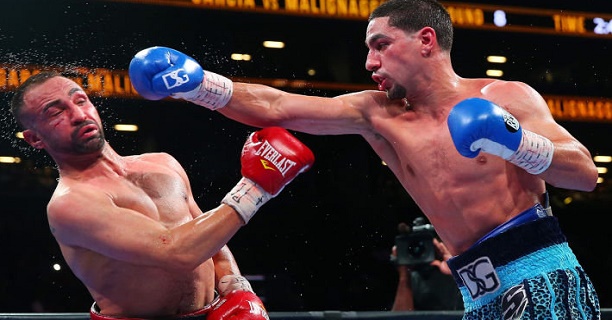 Garcia connected 121 of 485 punches for 25-percent. Malignaggi connected on 77 of 335 punches for 23-percent. Even though the punch stats appear close, Garcia handily won every round (although ESPN colour analyst Teddy Atlas did give one early round to Malignaggi). Malignaggi's offense was weak and Garcia appeared unblemished after the bout.

Malignaggi, on the other hand, suffered a bad cut over his right eye. The cut was opened in the third round. The right eye kept getting worse and worse until the bout was stopped in the ninth with Garcia battering Malignaggi against the ropes. Garcia was leading on all three scorecards when the fight was stopped with 79-73, 79-73 and 78-74.

Rousimar Palhares added yet another gorgeous submission to his highlight reel, with his win over Jake Shields last night, but his dirty tactics continue to be a story i just about all of his fights.
Palhares debuted a new technique: an eye gouge from the bottom. Referee Steve Mazzagatti repeatedly warned Palhares but did not deduct a point and allowed him to continue scratching his fingers across Shields' face.

Palhares locked in a brutal Kimura that immediately scored the tap. In vintage Palhares fashion, however, he refused to relinquish the hold and gave it a clear extra tug for good measure.

It's standard operating procedure for Palhares, who has earned a well-deserved reputation as a dirty fighter, based on his habit of refusing to let go of submission holds when he was in UFC, which got him cut.

Shields then took a swing off his back after the referee finally broke off the fight, which prompted the corners to try to storm the cage. Crazy. 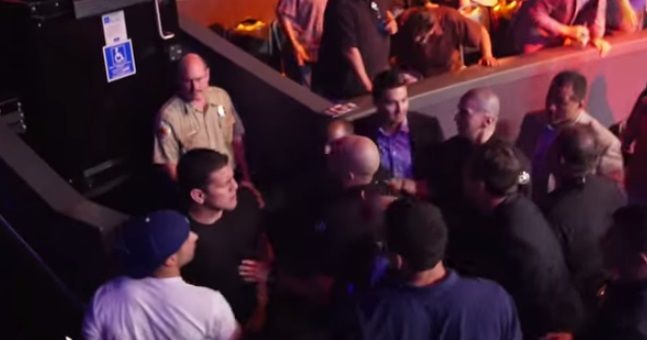 A wild brawl broke out between the camps of Khabib Nurmagomedov and the Diaz brothers before the main event of World Series of Fighting last night.
According to Sherdog.com, The brawl started after Nate Diaz and Nurmagomedov -- whose feud has been simmering on social media -- ran into each other in the crowd. Nurmagomedov was there cornering his younger brother, Abubakar Nurmagomedov, as well as fellow Russian Islam Mamedov. Nate and brother Nick Diaz were at Planet Hollywood Resort and Casino to support teammate Jake Shields, who fought Rousimar Palhares for the WSOF welterweight title.

During the main-event walkouts, it appeared that Nate was walking by the area where Nurmagomedov was seated. Words were exchanged, and although Sherdog.com was cageside, it was difficult to see exactly who threw the first punch. Sources have told Sherdog.com two stories: It was Nate after a heated verbal exchange, or it was someone in Nurmagomedov’s camp that threw the first punch and Nate was protecting himself.

Nevertheless, things escalated quickly. WSOF executive Ali Abdel-Aziz jumped out of his seat and got a hold of Nate after he took a swing at Nurmagomedov. Security briefly squelched the skirmish and Nate was escorted away from the Russian. As Nate was exiting the arena, he and Khabib traded barbs again from a distance and Diaz asked him to take the fight outside. In the midst of that, Nick Diaz and teammate Martin Sano Jr. appeared on the other side of Nurmagomedov. Nick hurled a drink at Nurmagomedov, and that was the spark that set the keg on fire. The Russian and his team turned their attention to Diaz and Sano. Tempers flared and Sano rushed someone in Nurmagomedov’s camp. Punches and kicks were being thrown by all as security tried to wrangle the feuding parties before things got really out of control.