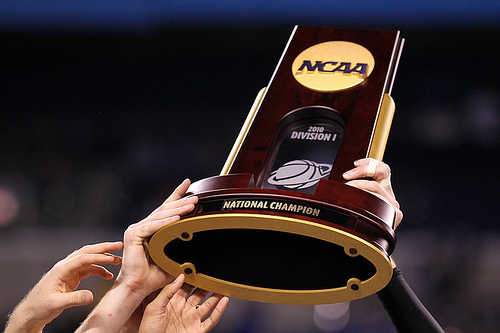 The National title game is all set for Monday night, Duke vs Wisconsin.

No, I did not think Kentucky would be defeated, but that is why the NCAA tournament is the best tournament in all of Sports. Anything can happen.

Wisconsin has impressed me though, and I found myself pulling for them last night, even though a Kentucky lost killed any chance i had at winning any bracket pool I entered. But that's why the game is so great, you never know.


Duke, to be honest, has played the best overall basketball of any team throughout the tournament, even though it pains me to admit it. Yes, i hate Duke. But their inside-outside game with Okefor, Cook, and Winslow have been simply unstoppable and it destroyed Michigan State.


For Wisconsin, Kaminsky and Dekker have been simply too good when the game is on the line for me to bet against them.  And I'm pulling for Bo Ryan to win his first National title. Largely because I'm tired of Coach K winning. Yes, did I mention I hate Duke.

Either way, it's been a great tournament and with Kentucky going down last night, it really is anyone's game to win. Both teams are built touch inside and have strong shooters as well. Definition of a pick em.