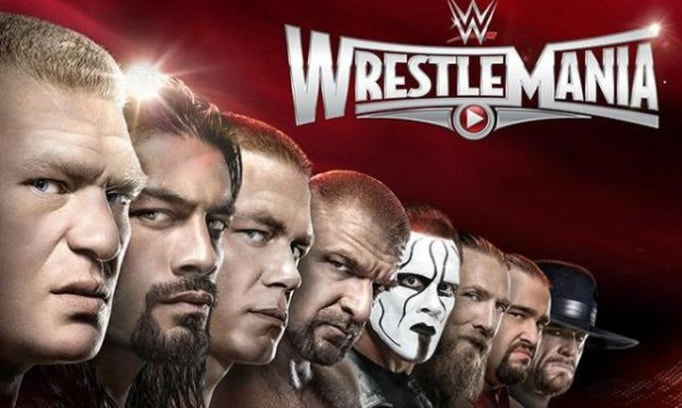 By: Larry Causion Jr.    CausionCreations.com
Posted: Thursday, March 26, 2015
This Sunday night, live from Levi Stadium, located just outside of San Francisco California, is the 31st edition of Wrestlemania. Over the past 6 articles, I have recounted and examined the build to the main event of this years Wrestlemania. While I have not been impressed, I must say that I guarantee I will still enjoy the show.

I am a wrestling fan. And if there is one consistent trait about true wrestling fans, its that we are loyal, even to a fault. We may complain and get furious with booking decisions, but we always find something to enjoy. This Sunday's card presents a few golden nuggets for me to enjoy. So let's categorize my interest level in order.

I know you are thinking, "He just spent 6 articles talking about how bad the build to this match has been". And you are right, it has been very weak in my opinion. But the events of this week changed my interest level greatly, as Brock Lesnar signed a new deal with WWE and will remain with company.

This changes everything for me. The booking possibilities are endless now and I can easily see Brock retaining the title and the show ending with a dramatic event. Let's face it, I believe I presented all the evidence you need to show that Roman Reigns is not ready for the spotlight Sunday night will present. And if you need more evidence, just watch the reception he will receive Sunday night. Smh. Poor fella. He's in trouble. Let's just say, Brock Lesnar will be the baby face and Reigns will overwhelmingly be the heel.

But the ending intrigues me. Many options are available. 1) Brock wins clean walks away the celebrated champion. 2) Reigns beats Brock, booed out of the stadium. 3) Heyman turns on Brock, Reigns turns heel and wins. 4) Brock wins, and Seth cashes in. 5) Reigns wins, Seth cashes in.

Either way, I'm interested. If for nothing more than the crowd reactions.

Unlike many, I have never been a John Cena hater. To me, the guy is one of the only reasons the company has remained relevant. Sure, he's not the best wrestler, and sure Super Cena can get annoying at times, but overall, I have no problem with Cena being a major part of the roster. He gets emotion from the audience and is treated and received like a larger than life character. That's what makes this business work.

Rusev has been booked damn near flawlessly over the last year and has never been pinned. Whenever people say wins and losses don't matter, I howl with laughter. Jobbers don't matter. When a guy always wins and is treated like a special commodity, he becomes important in the eyes of the viewers. This has been consistent throughout wrestling history. The combination of Rusev and Lana is the best act in all of wrestling. She is phenomenal.

The match has been built perfectly and I love everything about it. Cena, the American hero, challenged Rusev at Fast lane, trying to accomplish what many have failed to do, beat the undefeated Russian.

He failed. Rusev choked out John Cena and walked away the conquering champion. Cena never quit though, as he passed out from the pain. Cena wants a rematch, Rusev simply says no, you don't deserve it. Excellent heel. Cena beats Rusev senseless until Lana gives him the rematch to save her monster from a savaged beating. And we are set.

Cena vs Rusev for the United States title. By Cena going after the title, it automatically raises the importance of the belt. Excellent. The U.S title should be viewed as a prestigious title, especially with Brock Lesnar, the WWE champion, rarely appearing on weekly television. Cena is excellent in this role and if he wins the belt, he raises its stock. If he loses to Rusev, Rusev is over even more and ready for a World Title challenge. Either way, great.

I hate that Daniel Bryan is in this match, but what are you going to do. I could write a long article about how stupid this is, but it is what it is.

Logic would tell you that much like with Cena going after the United States title, Bryan is in this match to win it and elevate the Intercontinental title. But who knows. With guys like Dean Ambrose and Dolph Ziggler also in the match, the fans would be happy with either three winning..... LOL. Yea, right.

If nothing else it should be excellent action.

I may be the only person who really isn't excited for this match. Maybe it's because I have watched Sting in TNA for years, so I'm not like some who have not seen him since WCW closed down.

I just don' understand the story they are trying to tell. To me it's dumb. They originally tried to frame Sting as the last hold out of WCW and HHH as the banner holder of the Attitude era. Dumb. It's 2015. Then it was Sting standing up against the Authority as a vigilante. WHAT? I'm not impressed.

Which leads me to...

The Undertaker vs Bray Wyatt

I will never understand why this match was booked. I don't get it. Undertaker lost to Brock Lesnar at last year's show, snapping his undefeated streak. Had nothing to do with Bray Wyatt. Taker hasn't been seen since.

So why is he wrestling Bray? I have no clue. And Bray's promo's suck.

The match up everybody wants to see is simple Taker vs Sting. But Oh well.

Why would I care about this match? I just saw Orton outsmart this idiot for weeks, then beat him down for like ten minutes a few weeks ago. Not interested. But I'm sure the wrestling will be good.

And the rest is simply filler.

Overall, I'm sure the show will be a spectacle. and I will enjoy it. But honestly, I'm looking forward to next years Wrestlemania in Dallas, and I plan to be in the building with 100,000 fans.

Hopefully they keep that road straight, cause this one is broken.