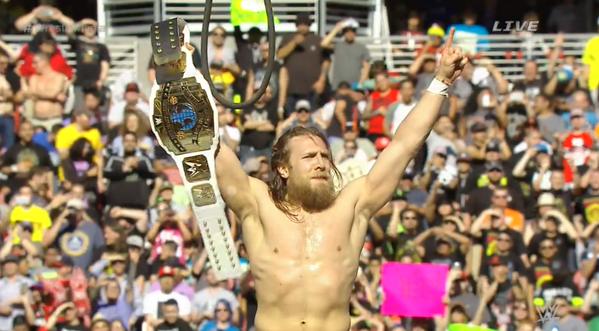 Throughout the history of wrestling, championships have always been rewarded to performers that are seen as the best.

With the World Heavyweight title, factors such as being able to draw money by headlining a profitable show was always a main key. Having the in ring skills has many times been trumped by the ability to connect with the fans with personality and charisma. No greater example of this than Hulk Hogan, a charismatic performer who's look and intangibles made him a headliner, while his in ring work rate was never considered anything special.

In the WWF, the excellent in ring workers or technicians were always granted the Intercontinental championship and relied on to put on classic matches 300 days a year. The IC champion was always a work horse that gave fans exciting matches that kept fans satisfied, while the headliners filled the seats.

In the NWA, the World Champion traveled from territory to territory, and defended it all over the country. Therefore, there would be many weeks where there was no world championship match on a given card.

So as a way to elevate their own talent, the Carolina territory also know as Mid Atlantic, run by Jim Crockett Promotions, created the United States Title. Unlike the Intercontinental title, the United States title wasn't expected just to be the "great workers" title. The U.S title was treated like the promotions world championship. The U.S title became the premier title in the Carolinas, and it was a title everyone in the promotion coveted.

But over the past 15 years, these former prestigious titles have been devalued greatly and in 2015 they are in need of a renaissance.

Well, to WWE's credit, at Wrestlemania 31 they pulled the trigger on a long overdue plan to reinvigorate both of the these once prestigious titles.

First lets look at the Intercontinental title, which was won by Daniel Bryan. Bryan was the WWE World Heavyweight champion at the close of last years Wrestlemania, and only a neck injury ended his title run shortly there after. Daniel Bryan is considered by the majority of the fans as the most talented and popular performer in the company.

Bryan going after the IC title instead of the WWE World title was initially viewed as a smack in the face and act of disrespect by many of his fans, and in many ways it was. But if the plan is to put a renewed focus on the secondary titles, there is no better candidate that would instantly make the IC title important again, than the most popular and best wrestler in the company.

This was the point of putting a renewed focus on the secondary titles and putting the belts on serious main eventers. So that the road tours could be headlined with title matches that mean something. If you recall, that was the purpose of the brand split back in 2002, and the formation of the two world championships representing Raw and Smackdown. If you really think about it, that is when the former secondary titles became devalued. The focused shifted from the IC title and U.S title and turned to the WWE title and World Heavyweight title.

Going forward, in order for the IC title to really mean something again, Bryan should defend the title against a bevy of opponents in great matches and really put over the significance of carrying such a prestigious title. The belt should be coveted by every superstar, not just a few designated mid carders. It should be the workers title once again. Guys from NXT should even come up begging for a chance at a title match. The title needs to be prestigious.

As for John Cena and the United States title, Cena carrying the championship automatically makes it important. There are certain guys throughout history who just are made guys, and really don't need the World Championship to be considered a top guy. Of course it comes from many years of being booked on top, but that is how you elevate a performer to the next level. Hogan was still the top guy when Savage and Warrior were the champion. Undertaker doesn't need to be the champion to be the Phenom and viewed as special. And in 2015, John Cena is simply a made man.

In order the U.S title to be taken seriously going forward, Cena should carry the title and defend it in important programs, not just one off matches every week. Unlike the IC title, I wouldn't have Cena defend the belt every week on TV, but instead keep each title defense special. Especially since Seth Rollins is World Champion.

If Brock Lesnar was still Champion, and gone for weeks on end without defending the World Title, the Intercontinental and United States Titles should be built up to be so prestigious and important that fans would have no issue with either title headlining a PPV's in his absence. That should be the companies goal over the next 6 months.

Build the belts up so they are worthy of their lineage, and viewed in the same light as they were viewed by fans during the glory years.

Join us next time as we look at the tag team and women's title.