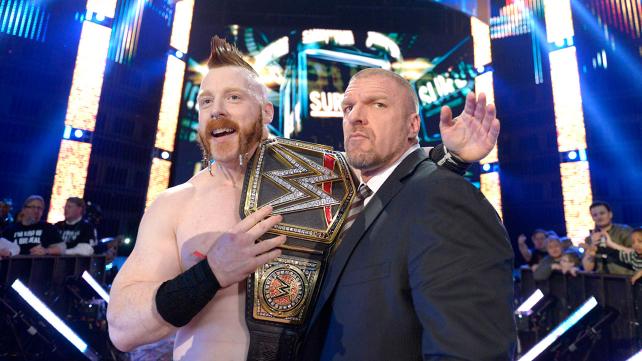 Long before Seth Rollins was injured and forced to vacate the WWE Title, the WWE weekly ratings and overall interest had already began to steadily decline. There are multiple reasons people will point to such as the lack of new superstars, or too much television being  produced watering down the product, or nobody being presented as being special. I agree with all of these reasons. But the fact is, this didn't start last month, or in the last six months, or even year. This has been happening for awhile now.

One of the biggest issues the WWE has, is not giving the people what they want. Instead the company insist on force feeding what they want down the fans throats. Sure, some will say that the company knows best and you shouldn't book for the vocal minority, or "smart marks" on the internet, but to me this is not the smart way to look at this business in 2015.

These days, fans are smarter and wrestling "insider news" is more prevalent and more accessible. Internet fans are arena fans. They set the trends, they help determine who is popular, and vocally tell the company exactly who they should be pushing. NXT is a perfect example of what listening to the crowd can do. Engaged and satisfied fans can make your product that more exciting and enjoyable to watch. A crowd that is dissatisfied and turned off will shit on your product and make the product less enjoyable to watch. A hot fan base makes the product more desirable to follow and pay to see.

So when Seth Rollins went down with injury, the company had an opportunity to hit the reset button. Give the fans something different, or book their chosen one, Roman Reigns, the right way and make him the Champion fans could get behind.

There were endless options, including turning Reigns or Dean Ambrose, giving Kevin Owens the ball, bringing someone like a Samoa Joe up from NXT with impact.

The company chose Sheamus, who captured the WWE title by cashing in his briefcase barely five minutes after Reigns had won the title beating Ambrose in the tournament final. Vince settled on Sheamus cashing it in rather than the original plan of the show being the coronation of Reigns as champion, which is still the long-term goal.

The idea is that the people see Reigns as the corporate pick, and therefore, he gets booed by the fans who come to the tapings and PPVs. So the conclusion is to do a storyline where the corporate people are screwing him and keeping him from the title, which will cause those fans to get behind him and want him to win. Essentially they're copying the scenario from 2013-14 for Bryan, and hoping that gets people behind Reigns before they pull the trigger on him as the new centerpiece of the company, even though if you watch the TV, he already is.

It's a challenge manipulating the modern fan. The good news was that the next day at Raw in Nashville, Reigns was cheered far more than anyone on the show. The bad news is that the show did a 2.15 rating and 2,950,000 viewers, not only the lowest rating for the show in nearly 19 years, but a full seven percent off the previous bottom of 3,160,000 viewers two weeks earlier.

The problem is they took Sheamus from a mid-card comedy figure. His entire role seemed to be to inspire chants of "You look stupid." He came in with zero steam, and during the show was portrayed as a second match heel geek, the uncool member of a five-man team whose stars were The New Day. But at the end of the show, he was supposed to be the latest handpicked champion of HHH and Stephanie McMahon, a tired top heel scenario, and now is being counted on to anchor not only the next PPV, but also main event the live events.

Is Sheamus the first champion to be undeserving of the title? Hell no! But when ratings are falling fast and interest is weakening, was he the champion the company should have picked at this time? Hell no.

Where is the big hook? Where is the big creative idea that gets things hot again? I feel like the company is stuck in mud. You can't expect Brock Lesnar or Cena to pull them out either, because they have been there and featured as the the slide has been happening. Its bigger than that.

The fans are clamoring for new stars to be given a chance to shine. Its unfortunate that it takes the crowd hijacking shows like they did with Daniel Bryan, to force the hand of the powers that be. But what will it take now that the crowd is just quiet? Sure, they will play out this story line that will eventually get Reigns the title, but after that, what's next?

​And the injuries just keep mounting. I hope there is some light at the end of this tunnel, but I don't see it.