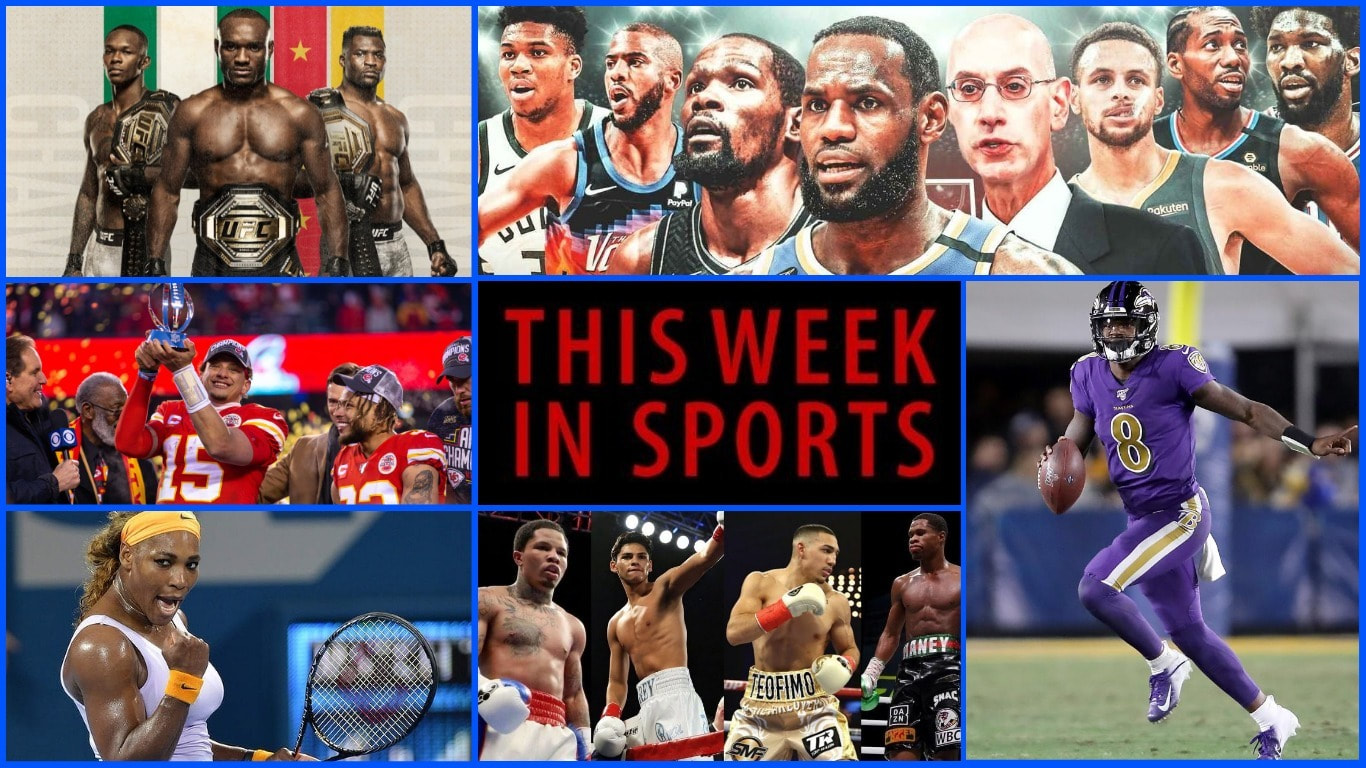 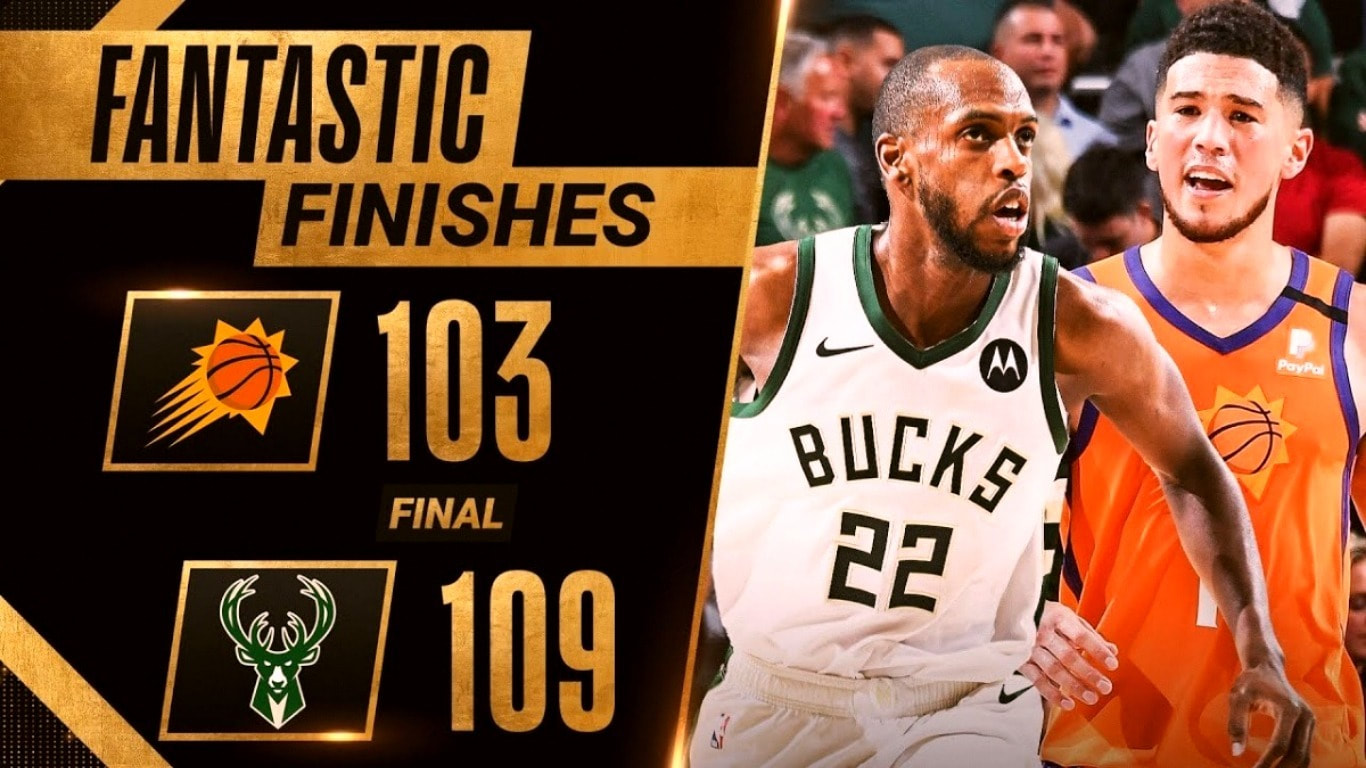 Game 4 of the NBA finals was the best contest we have seen thus far and it really came down to which duo played better down the stretch. This series really has been so even when you consider how Phoenix played so dominant at home in games 1 and 2, and the Buck returned the favor back in Milwaukee in games 3 and 4. Even the performances have somewhat equaled leveled out, as each teams top Stars have had games where they were sensational, and games where they left a lot to be desired. Well, except for Giannis, who's worst game came in game 1, and that was a game we weren't even sure he'd play in, returning from the knee injury. Overall, the stars have dictated the series and the home team has the clear advantage in each game. 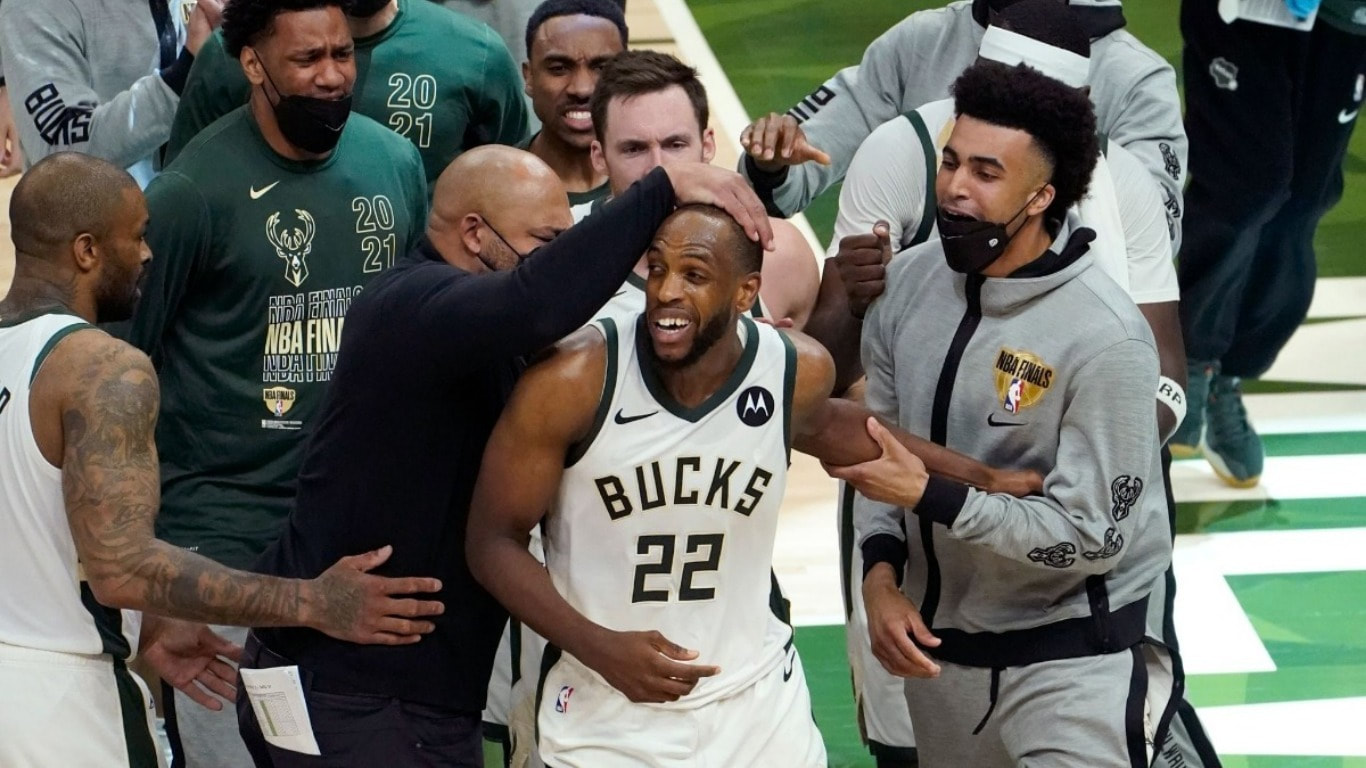 You can't talk about game 4 without talking about Khris Middleton, who was absolutely sensational for the Bucks. Middleton scored 10 straight points in the 4th quarter, giving him a total of 40 for the game. He was clutch in every sense of the word because he was aggressive and not afraid to take and take huge jump shots. I am extremely critical of Middleton because I know what he can do and he pisses me off when he disappears far too often. For the Bucks to win a championship, Middleton has to be consistent and play big in Phoenix. Playing well at home is fine, but the real great ones take their show on the road. 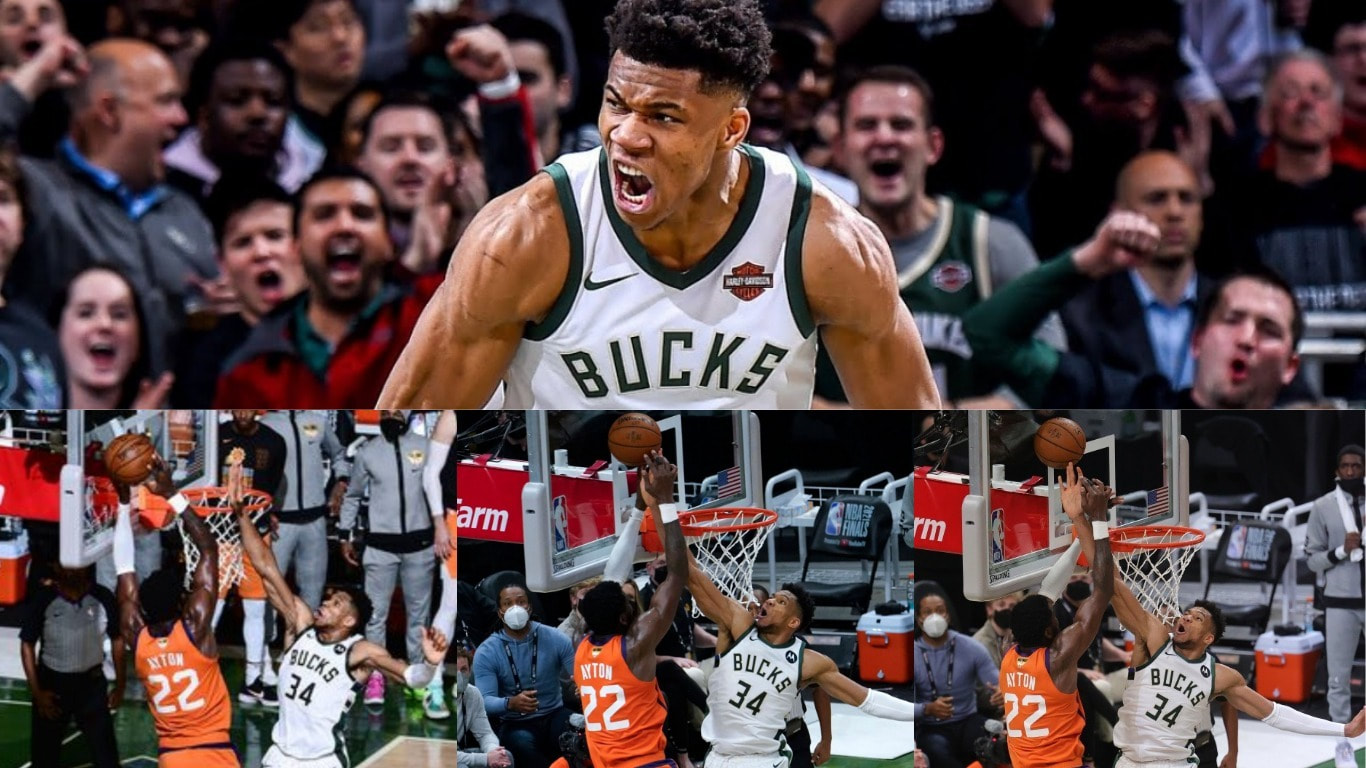 Which brings me to Giannis Antetokounmpo. This man has been the most consistent player in the series, putting up back to back 40 point games, followed by a a defensive gem in game 4. The play everyone will remember forever, the block on Ayton, was absolutely perfect. I can't say enough about the type of mental I.Q and agility it took to block that alley-oop. And that was far from his only defensive play. Ayton, who had been dominating at times throughout these playoffs, was held to only 6 points, largely because he had to concentrate so much of his efforts on trying to slow down Giannis. And he did a pretty good job. But it came at a cost. The key to Giannis' greatness is he can hurt you in multiple ways, as he made excellent passes all night, racking up 8 assists. We have seen his game travel on the road, and he will need to come up big in Phoenix. 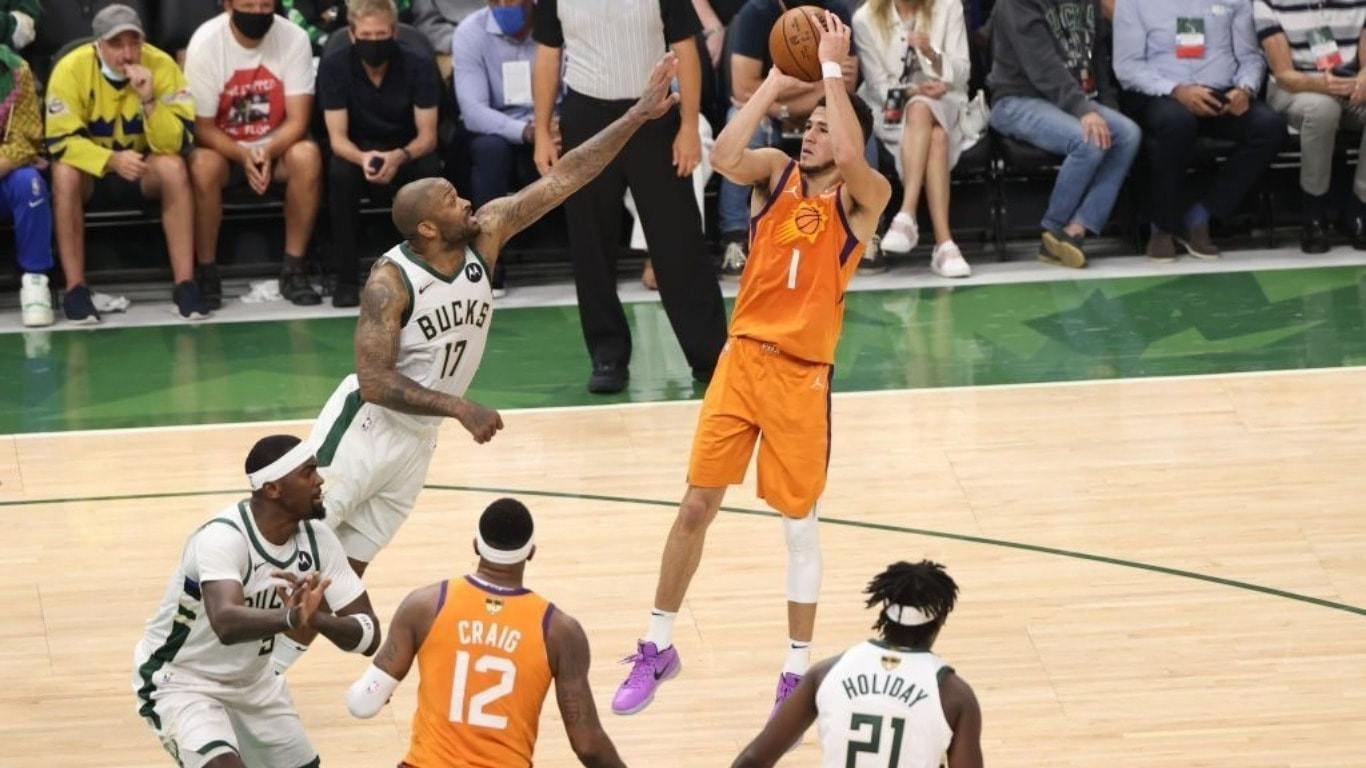 When it comes to the Suns, game 5 will go a long way in determining the ultimate fate of this series. Phoenix came out in game 1 firing on all cylinders and all three of their stars, Devin Booker, Chris Paul, and DeAndre Ayton were impressive. CP3 scored at will in the second half and looked well on his way to possibly not only winning his first championship but winning finals MVP. Game 2 saw the role players like Bridges and Crowder come up huge, and despite 40 points from Giannis, the Suns shut down the rest of the Bucks.

But games 3 and 4 in Milwaukee saw Booker and CP3 each take turns having terrible games. Booker was a train wreck in game 3, and was basically shut down early by Coach Monte Williams. In many ways, it was complete gut punch that the young star has never experienced. Once his shot wasn't falling, he couldn't regain any rhythm. However in game 4, Booker came out determined to right that wrong, and was absolutely sensational, especially in the 3rd quarter. Any shot he wanted, he got and it seemed like he just couldn't miss. That 15-17 foot jumper is absolutely flawless when he is on. And he had it going. But defensively, he was horrible. Let's be completely honest, the guy committed at least 7 fouls and should have been eliminated with about 5 minutes to go. Had Booker played more disciplined on the defensive end, he could've easily dropped 50. But his lack of discipline on defense undid a lot of the great offensive output. 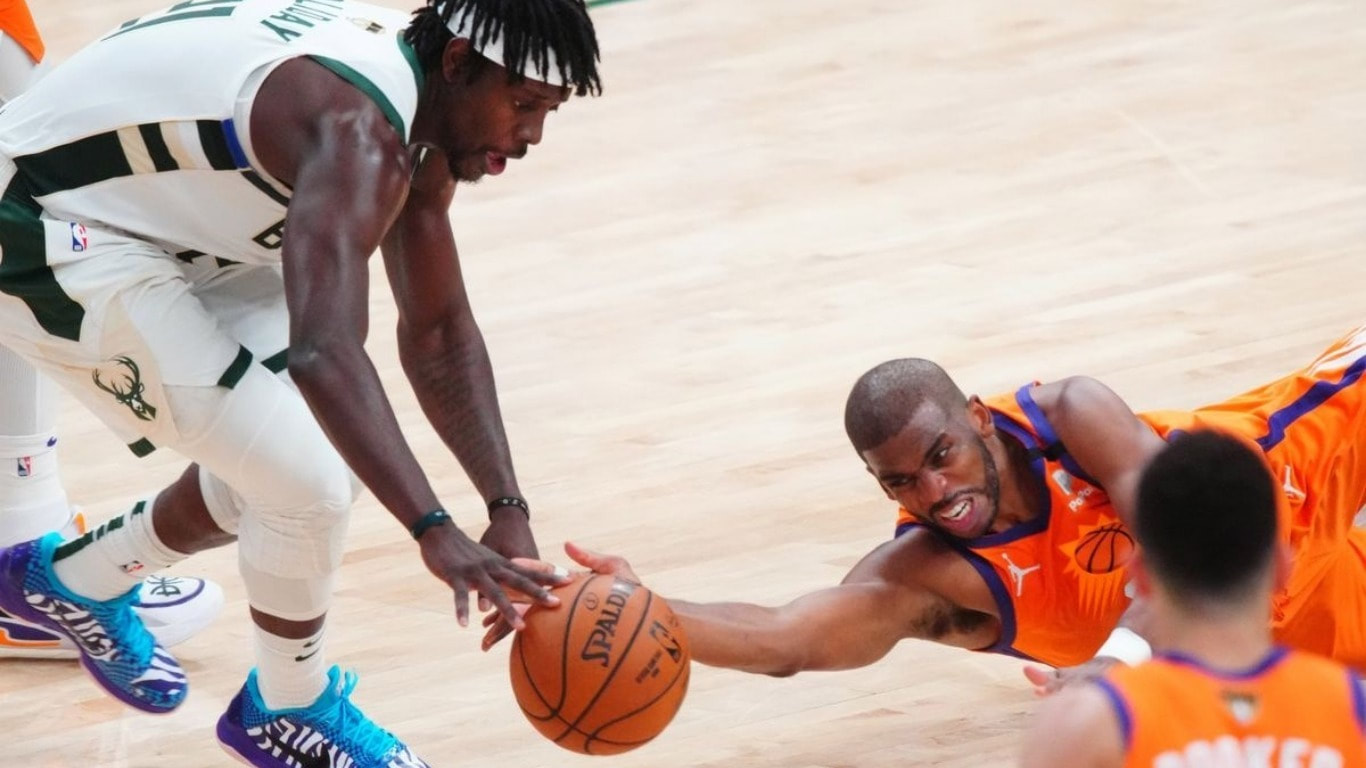 When it comes to Chris Paul, his production has declined in each game throughout the series. Much like Booker struggled in game 3, CP3 was terrible in game 4. Many are attributing this to the defense of Jrue Holiday, but honestly, I think its more about attrition. He's never been this deep in the playoffs, and he's an older player, who is relied upon to still play at a very high level. He was very careless with the basketball in game 4, and he made turnovers at all the wrong times. For Phoenix to win, he has to play well. Booker put up 40 and it wasn't enough with Paul getting Ayton easy looks and putting up his normal scoring output.

So which Suns team is the real deal. The team we saw in game 1 and 2, or the 3 and 4. To me, the team that plays the best as the series progresses and adjustments are implemented, normally wins. Phoenix isn't growing or acquiring more bigs to grab rebounds and stop Milwaukee from dominating inside. If they are to win this series, they will have to be phenomenal shooting the ball at home, especially from 3, which they are more than capable of doing. This series is far from over.