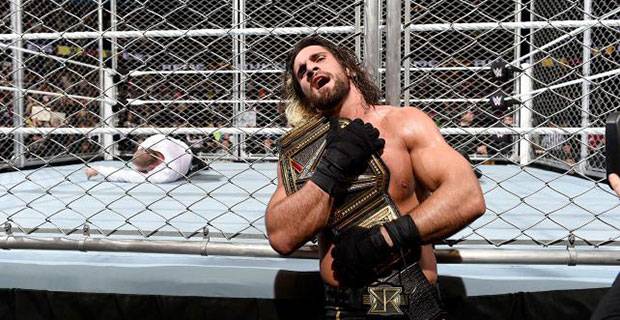 By: Larry Causion Jr.    CausionCreations.com
Posted: Tuesday, April 28, 2015
Credit: Dave Meltzer, WrestlingObserver.com
WWE Extreme Rules was a pretty darn good show. There was not a bad match on the card and the crowd in Chicago was hot all night. Let's run down each match up and I have also included highlight's for your viewing pleasure.
BAD NEWS BARRETT VS. NEVILLE

Good opener with Neville got a much needed big win. This match was added late due to the injury of Daniel Bryan, who has been pulled form all activities. That situation just gets sadder and sadder.

Barrett missed the bull hammer and Neville used a high kick and the Red Arrow for the win.  They should have put Neville over because since it was a makeup match for the crowd.  It was like most Neville matches, a few good acrobatic spots, a well worked match with a big dive.
DEAN AMBROSE VS. LUKE HARPER STREET FIGHT

They had a brawl with kendo stick shots.  They ended up both going backstage and brawled.  Harper jumped into a car.  Ambrose tried to get in but was knocked out.  Ambrose then dove into the car as Harper drove off, so the match just ended. Later on while the New Day were doing a promo, a car showed up and Ambrose and Harper came back and are brawling backstage.

They both threw a ton of chairs into the ring, had a short brawl.  Harper power bombed him on the chairs for a near fall  Ambrose came back by slamming Harper off the top and then used the Dirty Deeds for the pin. Ambrose needed a win on PPV.
SHEAMUS VS. DOLPH ZIGGLER KISS MY ARSE MATCH

Really good, but kind of short. They were going to near falls about 5:00 in and Ziggler won with an inside cradle off a slam by Sheamus.  Fans were chanting "Pucker up." Ziggler teasing pulling down his trunks.  Sheamus was refusing to kiss.  Sheamus kept stalling.  Crowd was really hot as they were stalling.  This is a great crowd.  Sheamus instead gave him a low blow and Brogue Kick.  It got a lot of heat.  Sheamus rubbed Ziggler's face in his ass.
TYSON KIDD & CESARO VS. NEW DAY FOR TAG TITLES

This was about as good a match they could have.  Really great.  All kinds of great stuff including Big E tackling Kidd through the ropes. It was E & Kingston as the team.  Super heat.  New Day was over great as heels.  They traded all kinds of finishers.  Cesaro & Kidd did the giant swing into dropkick on Kingston but E saved.  Xavier Woods distraced the ref.  Natty slapped Woods.  Kingston used a schoolboy holding the trunks to pin Cesaro and win the titles.  Kidd & Cesaro were excellent, and New Day winning was a great move, because it gives them some legs as heels.
JOHN CENA VS. RUSEV RUSSIAN CHAIN MATCH FOR US TITLE

The chain match hurt this a lot more than helped im.  It's just hard to work a chain match when you can't use the chain for shots; it was just a tag the posts match. The big deal was Lana clearly going face as Rusev kicked her out when the fans was chanting like crazy for her.  Cena used the STF but Rusev made the ropes.  Rusev used the Accolade and touched two corners but Cena broke it up.  The finish saw both guys hit three corners and Cena hit the Attitude Adjustjent and Cena touched the fourth corner.  It came across like the end of he feud..... well, it's not. They are having a I quit match at Payback.
ROMAN REIGNS VS. BIG SHOW LAST MAN STANDING

Really wild match.  They stalled a lot early but the last part of the match was a ton of stunts with tables involved.  The finish saw Reigns tackle Show on the American table and they went through the Spanish table.  Show got up, but Reigns turned the American table over onto Show and he was buried underneath and couldn't get up for a ten count.  Show did a great job taking bumps and getting Reigns over with what came across as a big win.  Reigns gave him a Samoan drop through a table.  Show choke slammed Reigns over the top rope through two tables.  Reigns speared Show through the barricade near the finish.
SETH ROLLINS VS. RANDY ORTON CAGE MATCH FOR WWE TITLE

Rollins won of course.  The match was well worked not outstanding, with the controversy that Rollins used the RKO on Orton then crawled through the door to win.  The idea is that was the RKO banned, or only banned for Orton.  Not bad, but for me, the Kane stuff was unnecessary.