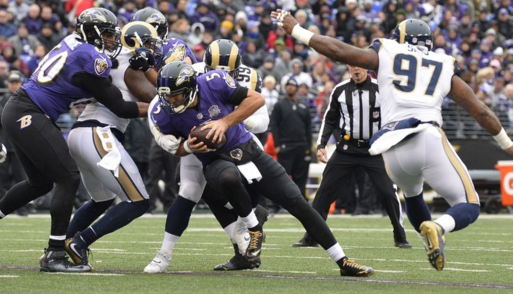 The Ravens beat the Rams but it came at a cost yesterday. A huge cost. Damn.
​Joe Flacco will miss the remainder of the season after tearing ligaments in his knee.
The injury occurred late in the fourth quarter of Sunday's 16-13 win over the St. Louis Rams. Ravens coach John Harbaugh said Flacco “tore at his ACL, and I think, his MCL as well,” but did not disclose which knee.

Flacco hasn't missed a game since starting the season opener in 2008. His run of 122 straight starts will end next week.

He played the final series Sunday despite being injured and moved the offense to set up the winning field goal by Justin Tucker. Flacco went 27 for 44 for 299 yards.
​
The Ravens also lost running back Justin Forsett, who broke his right arm earlier in the game. Forsett is expected to be out for the rest of the year.

I just don't know what to say about this team anymore. The Ravens have fought hard every game and could easily be a winning team had not dumb mistakes been committed at crucial times in tight games. But also, for what seems like the 5th year n  row, the Ravens have been bitten by the injury bug.

For your best pass rusher, left tackle, center, corners, wide receivers, tight ends to have missed significant time, is one thing. But now, to lose your running back and quarterback, there are no words to explain it.

I used this term to describe this team a few weeks ago, and it remains true:
​Snake-bitten.