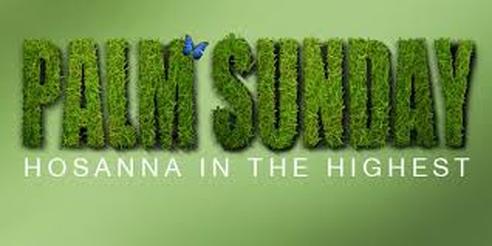 By: Larry Causion Jr.    CausionCreations.com
Posted: Sunday, March 29, 2015
Today marks the beginning of Holy week for Christians all around the world. Today is the day we celebrate the day Jesus Christ entered into Jerusalem, on his way to the ultimate sacrifice.

When Jesus entered Jerusalem, the crowd of people laid palms in his path and waved them in the air, shouting Hosanna in the Highest.

Laying the palms in the path was a custom set aside for only the highest of ranking people. So when Jesus entered Jerusalem, he was greeted as a King.

The waving of the palm branch was a symbol of victory, and as Jesus entered Jerusalem, it was a triumphant procession.

Jesus also rode in on a donkey, which was considered a high symbol of peace, opposed to riding in on a horse, which was a symbol of war.

Palm Sunday is a celebration, as Jesus entered Jerusalem, knowing what sacrifice had to be made. In the Bible, we soon find that many of the same people who shouted Hosanna, would soon be shouting Crucify Him on Good Friday.

As we reflect on Holy week, please take time to read your bible and explore the meaning and purpose of the various rituals in your church.