​After hours of debating, the bill to legalize mixed martial arts and put it under the auspices of the New York State Athletic Commission passed the state assembly by a 113-25 vote.

The bill had already passed the state senate, which means it goes to Governor Andrew Cuomo, who is expected to sign, and UFC is expected to run its first event in Madison Square Garden toward the latter part of this year.

New York had been the lone holdout in UFC's attempt to get the sport legalized nationwide. The bill had passed the state senate for seven straight years, but it had been blocked from even being voted on in the assembly.

UFC officials believed they had far more than enough votes last year, but time ran out in the session and once again, they could never get the legislation voted on.

There were long impassioned pleas on both sides, with the few dissenters talking about everything from homophobia, domestic violence, violence in society to the condition of Muhammad Ali, to the idea Madison Square Garden should be for team sports. 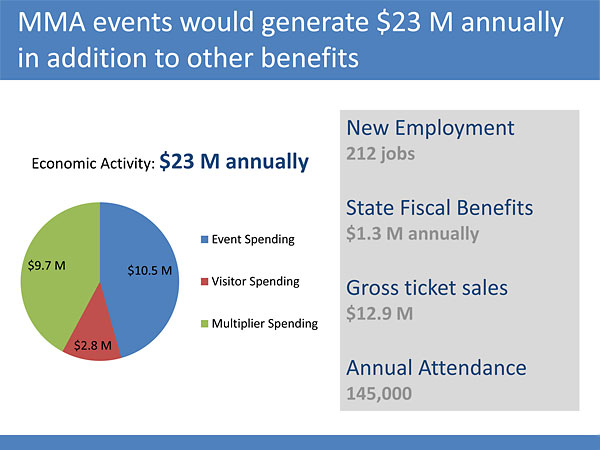 For MMA organizers, including the UFC, Bellator and the other MMA leagues, the legalization of MMA in all 50 states will be a watershed moment. The sport will be fully legitimized. Assuming S05949 becomes law, no longer can MMA carry an asterisk or some other belittling distinction that dismisses MMA as not quite a “sport.”

The MMA ban in New York will soon be over, but it won’t come free for MMA organizers. For one, MMA fighting will be regulated by the New York State Athletic Commission, which will adopt regulations that set forth rules for MMA promotion and that restrict participants, outs and exhibitions. MMA organizers will need to obtain a license from the Commission in order to host an event.

MMA will also be taxed in New York and at a rate higher than boxing or wrestling. According to the language of the S05949, the state will impose an 8.5% tax on receipts on ticket sales to MMA fights, whereas gate receipts for boxing and wrestling matches are only taxed at 3%. S05949 also imposes a 3% tax on the combined gross receipts from broadcasting and Internet streaming rights (with a cap of $50,000 in tax payments). For boxing and wrestling matches, in contrast, the 3% tax on broadcasting rights does not extend to receipts from Internet streaming.

These taxes on MMA fights could generate substantial revenue for the state, particularly if the major New York arenas host MMA fights. Madison Square Garden, for instance, seats a maximum of 20,000 while First Niagara Center seats up to 19,468 and Barclays Center seats up to 19,000.  If you’re wondering if an MMA fight would fill so many seats, consider that 56,214 showed up to watch Holly Holm knockout Ronda Rousey in UFC 193 in Melbourne, Australia last November.
​
The legalization of MMA fighting in New York will also create opportunities for industries that can profit by organized fights. One such industry is the insurance industry, which, assuming Cuomo permits S05949 to become law, would see its members compete to insure MMA events hosted in New York.

​For the UFC in particular, access to the New York market means it can attract more fans and more corporate sponsors. This will help the UFC negotiate its next TV deal. In 2011, the UFC and Fox signed a seven-year deal that is worth approximately $700 million and that will expire in 2018. With MMA legal in all 50 states and thus fully legitimized, the UFC should be in a superior position when negotiating its next TV deal, as well as accompanying Internet, radio and video game deals. 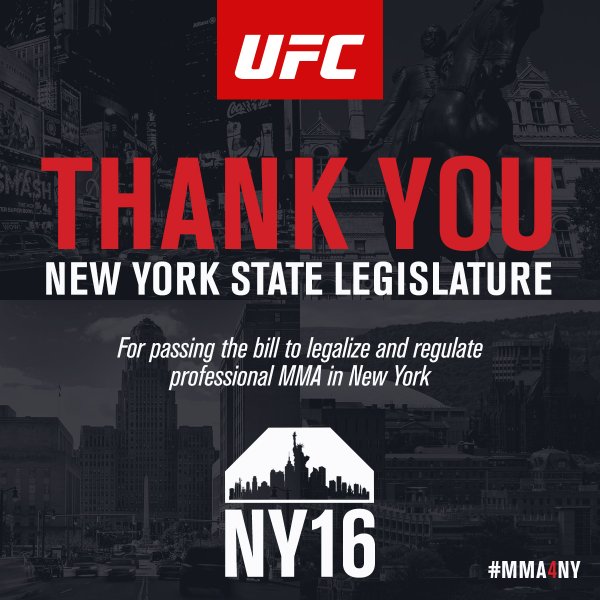