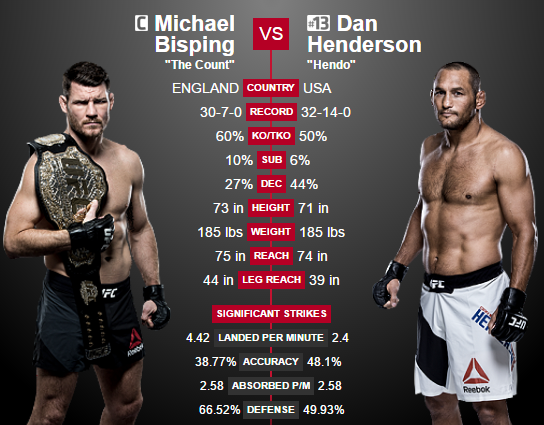 Round One - As you would expect the crowd is rabid. Henderson is loudly booed, Bisping wildly cheered. Loud let’s go Bisping chant. Bisping has been cut. Henderson connects with the big right hand! Bisping is down. Henderson is all over the Brit. Bisping desperately trying to get Henderson off him. Bisping’s face is a bloody mess. Bisping back to his feet. Bisping on the offensive, lands a high-kick. The buzzer goes and this atmosphere is electric. 10-8 to Henderson; could be 10-9, but I think Henderson almost finished the fight.

Round Two - Bisping is noticeably more aggressive in the second round. This round has been all Bisping. Bisping has Henderson in real trouble after putting together a solid combination following a potential low blow, but the American knocks him down again! This is real drama. They ride out the final minute with Henderson on top. Close, but I have 10 -9 Henderson.

Round Three - Bisping doing well to stay aggressive, and lands a high kick early. Bisping misses with a right hook. Bisping lands a leg-kick.  Bisping lands a clubbing punch to Henderson’s head that staggers the American. Bisping connects with a high kick as the round ends. Clearly Bisping’s round, and so he takes the lead, 29-28.
​Round Four - A less energetic round than the previous one as the battle starts to take its toll.  Henderson is hit low. Henderson taking his time with the restart, whilst Bisping plays to the crowd. Bisping lands a couple of straight punches. Henderson goes very close with a right hand. Bisping gets a couple of good shots in. Another round to Bisping, 39-37.

Round Five - Both men are clearly very tired. Bisping’s been opened up again. Bisping with a high kick. Henderson rushes Bisping, gets him down but Bisping gets back to his feet with no damage caused. Back on their feet,  Henderson tries to roll through. This fight was dominated by Bisping but I could easily see Henderson winning round 1, 10-8, and round 2, 10-9, which would mean a draw.

Mousasi stuns Belfort with a  head kick, and then just unloads on the Brazilian up against the cage. A thrillingly violent dissection. Belfort manages to escape but is quickly taken down, where Mousasi finishes him with more punches. 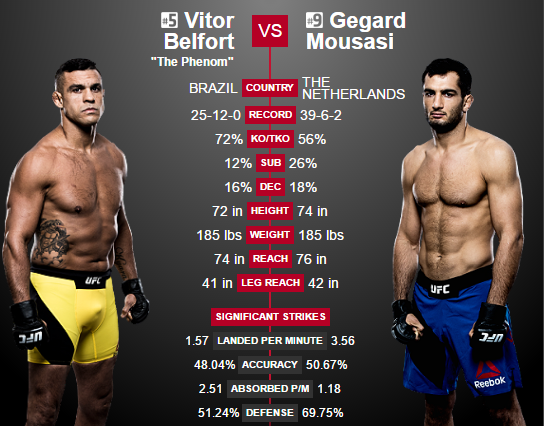 Manuwa lands some good punches to the body. Manuwa goes down low again, then connects with a right cross that causes OSP’s legs to buckle. Manuwa connects with a short left knocks Ovince St. Preux out cold! . 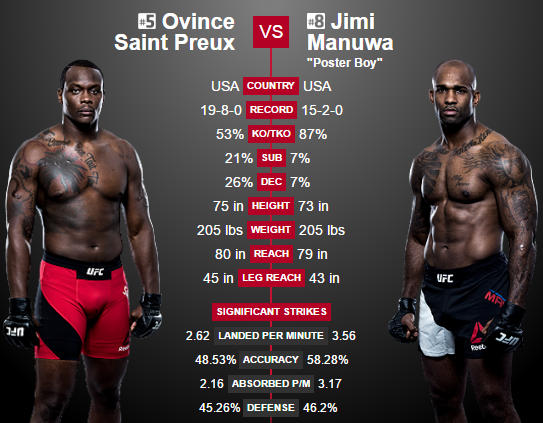