As some may have noticed, I rarely talk about ROH, although I watch and follow the product weekly. Honestly, while the in ring action is normally very good, something about the promotion just doesn't excite me and leaves me feeling bored a lot of the time.

ROH has a very loyal and rabid fan base, which really adds to the atmosphere of the product. But I simply struggle with the low rent production values, campy characters, and 3rd rate attention the company receives from its owners Sinclair broadcasting.

Every time I watch ROH I enjoy the action, but I feel like its missing something. Last night's show was great once again in eh ring, but it just did't give me the same feeling I get from watching a NJPW, WWE, or even a TNA show. Its very weird and hard to explain. But anyway, I'm a fan, its just missing something for me.

Let's run down last nights card. It began with a hell of a video package.
ROH: Best in the World 2015 on PPV 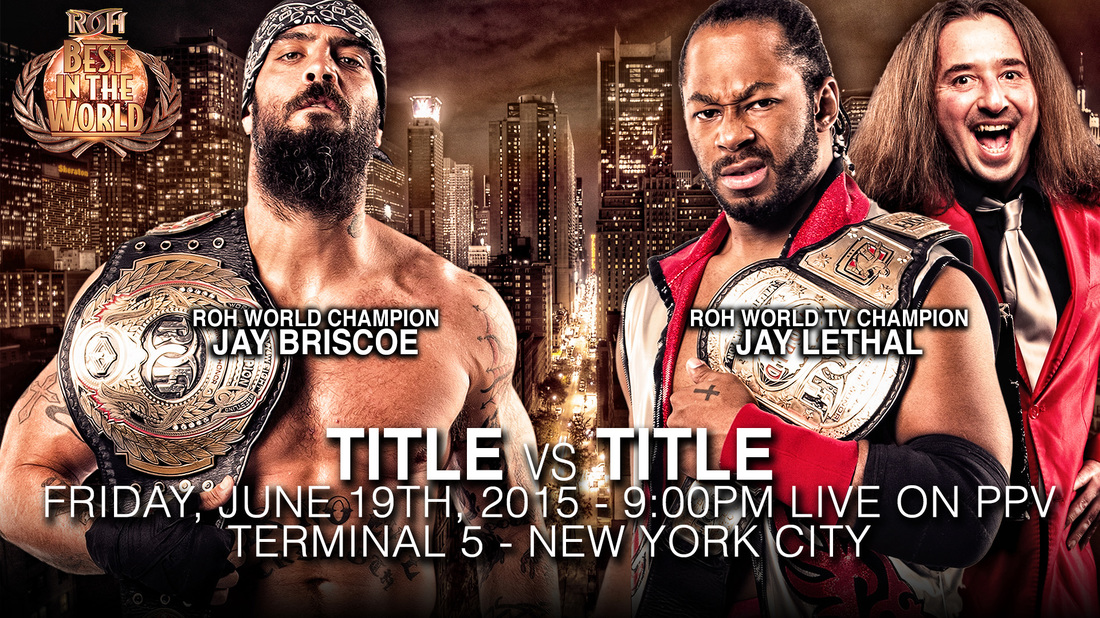 Title vs. Title:
ROH Champion Jay Briscoe vs. TV Champion Jay Lethal
They ended up going 27:00 with Lethal winning clean with a Jay driller followed by the Lethal injection.  Earlier in the match, Briscoe used a Jay driller off the apron and through a table while Briscoe kicked out of a first Lethal Injection. Really good match. Started slow but built and tremendous heat down the stretch. Both men shook hands when it was over. They showed both families at ringside. Nigel McGuinness kicked Truth Martini out after he distracted the ref, which allowed Lethal to a hit a low blow earlier in the match. It was put over as a clean win and fans were chanting "You deserve it" when he won.

NO DQ for the ROH World Tag Team Championship
The Addiction (Chris Daniels/Kazarian)
vs. reDRagon (Bobby Fish/Kyle O'Reilly)
Daniels & Kazarian won with Celebrity Reab on Fish on a chair for the pin in a no DQ match.  Lots of usages of chairs.  They had a hard time following the prior match and sometimes between weapons shots it was quiet.  All four worked real hard.  There was a spot where Kazarian was backdropped off the stage and wiped out Daniels & Fish.  O'Reilly was slammed onto a barricade on the floor supported by chairs.  They used Chasing the Dragon on Daniels and had him pinned but Chris Sabin pulled the ref out of the ring after the count of two.

ROH World Champion #1 Contender’s Match
“Mr ROH” Roderick Strong vs. Moose vs. “Unbreakable” Michael Elgin
Strong was a one man wrecking crew here carrying the match.  Crowd was more into him than anyone else so far.  The finish saw Strong use a running sick kick on Moose and then pinned him with a gut buster.  Best match so far, largely due to Stong.  A lot of highlights including Strong giving both guys superplexes, Moose doing a run up the ropes and plancha onto both of them and Elgin doing a running flip dive.  After the match, Veda Scott slapped Moose twice for losing and then shaking hands with Strong.  Scott was throwng a fit.  Cedric Alxander hit Moose after with the wrench and also knocked out Stokley Hathawy with the wrech.  So Scott is now with Alexander.

The Kingdom (Adam Cole, Michael Bennett, Matt Taven)
vs. Bullet Club (AJ Styles & Young Bucks)
Crowd loved the match.  The finish saw Cole first take an elevated indie taker from the Bucks and then they handed Cole to Styles who finished him with the Styles clash.  All kinds of crazy spots, not quite as wild as their match in Toronto but still great.  They did a spot where both Bucks superkicked Maria at the same time Styles used a Pele kick on her.  Cole came off the ropes with a Canadian Detoyer at one point.  Tons of big moves and near falls.

Mark Briscoe vs. Donovan Dijak
Mark Briscoe won with an elbow off the top rope.  ODB was in Mark's corner and really didn't do much aside from tearing Truth Martini's book, well the cover of the book.  Dijak is big and athletic but still green.  He worked over Mark's back most of the way with a crazy move where Dijak heaved him over the top rope to the floor.

Matt Sydal & ACH vs. The Decade (BJ Whitmer/Adam Page)
Page pinned Sydal with the Omori driver.  Decent match, ACH did a Fosbury flop dive at the end.  Two sets of heat by the heels, one on Sydal, the second on ACH.  Sydal hot tagged in flipping over the top into a huracanrana.  Sydal had Page pinned with a shooting star press but Colby Corino pulled Sydal out of the ring to set up the dive.  At that point Page hit his finisher.

Dalton Castle  vs "The Last Real Man" Silas Young
The finish saw Castle on the rop rope but Young shoved ref Todd Sinclair into the ropes.  Castle lost his balance and was crotched.  But Sinclair started yelling at Young.  While they were arguing, Castle gave Yong a low blow and schoolboyed him.  After the match, Young gave a spinning TKO to one of the boys.  Crowd wasn't that into this asde from funny chats like "Fan up."  Castle does some good suplexes and has a good act, but the TV match he had with Jushin Liger was tons better than this. 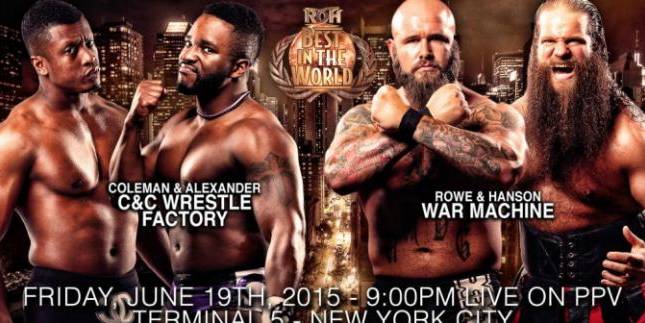 C&C Wrestle Factory (Caprice Coleman & Cedric Alexander)
vs War Machine (Hanson & Raymond Rowe)
War Machine pinned Coleman with fallout in 3:00, which is Rowe using  back suplex while Hanson came off the top rope with a legdrop and Hanson pinned Coleman.  Alexander never tagged in.  Alexander wanted to tag in right before the finish but Coleman wouldn't tag him in.  Alexander had a wrech in his hands.  After the match Alexander told Coleman they were done as a team.  Everyone though he was going to hit Coleman with the wrench, but he never did.  He just walked out on him.