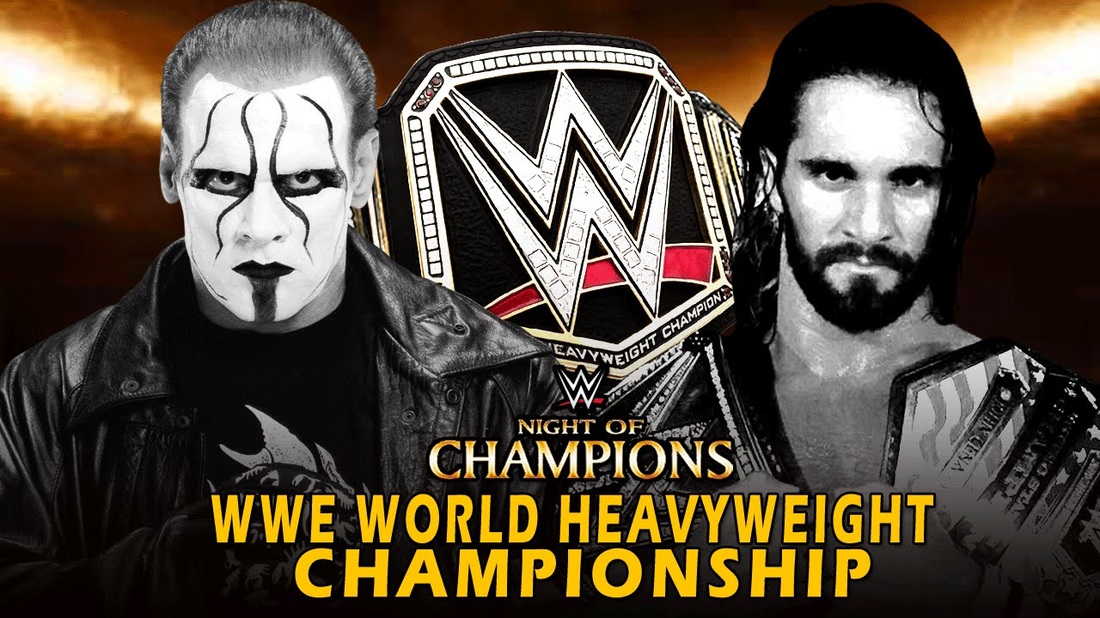 By: Larry Causion Jr.    CausionCreations.com
Posted: Monday, September 21, 2015
WWE presented its monthly Network special, formerly known as a PPV, Night of Champions, where all the titles were on the line.

Overall, it was a good show, not great. The match order could have helped it a lot more and the main event would have been a lot more gratifying had an untimely injury not occurred. So let's get to it. 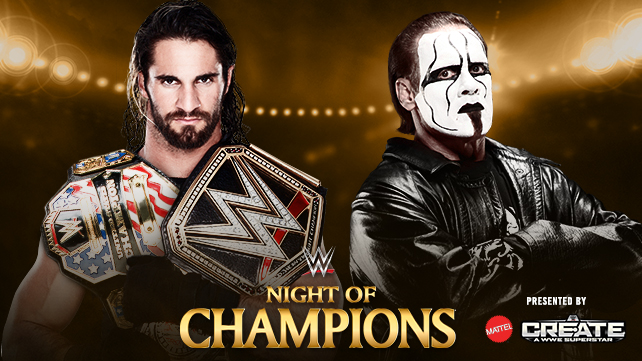 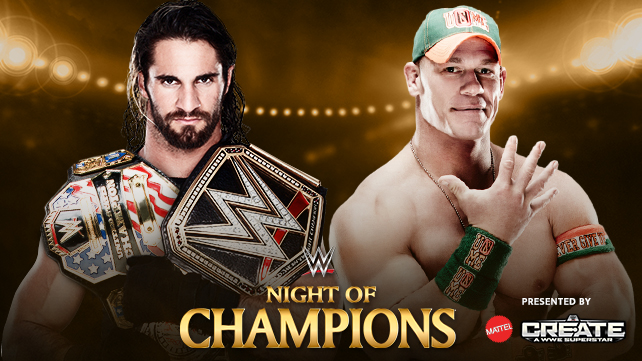 WWE United States Championship:
Seth Rollins (c) vs. John Cena
Cena won the title clean with the Attitude Adjustment after a reverse powerslam and a leg slice off the top rope.   Excellent match.  Great heat, way more than anything so far on the show.  Rollins wanted to leave after losing and not come out for the main event, but Cena gave Rollins an Attitude Adjustment on the floor and threw him into the ring.  It went back and forth. Real good performance again by both guys, but not like last month because they had to save something for the main event. 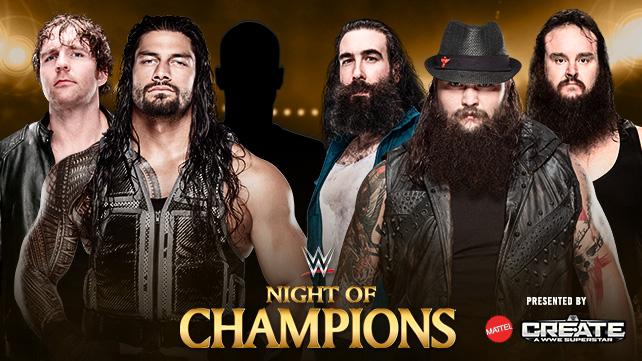 Dean Ambrose, Roman Reigns and Chris Jericho
vs.
The Wyatt Family
Can't lie, Jericho is cool and all, but I really wanted it to be Daniel Bryan, so I was let down. This was at different level of everything so far.  Reigns had Strowman finished after a Superman punch, but Jericho tagged himself in, and Reigns made the look like he wasn't happy about it.  Wyatt took out Reigns.  Jericho hit the lionsault on Strowman who powered out.  Strowman blocked the codebreaker and picked Jericho up in a one-armed Bruon backbreaker and turned him over and slammed him and then beat Jericho with the head and arm choke. They used Strowman really well.  Jericho seemed to turn heel as he walked arrogantly on the other two after the match. 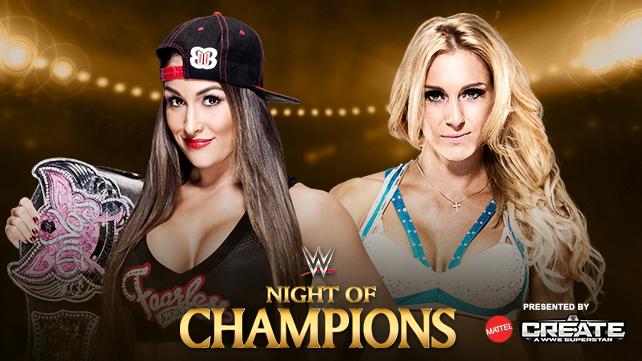 WWE Divas Championship:
Nikki Bella vs. Charlotte
Charlotte won the title with the figure eight and Ric started crying in the ring.  Nikki took the entire match working on the left leg, wrapping it around the post and doing all kinds of moves on it.  She dominated until Nikki came off the top rope into a spear and Charlotte immediately put on the figure eight.  They treated the title change like it's a big deal, a lot of that being Ric in the ring.  She limped and strutted with Ric after the match.  Now she's crying in the ring as well.  Well done match, best thing on the show so far. 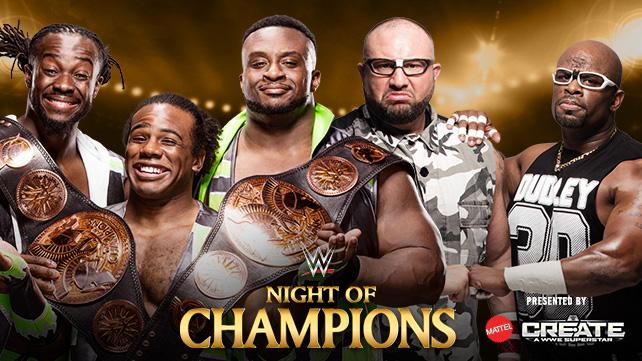 WWE Tag Team Championship:
The New Day vs. The Dudley Boyz
Big E & Kofi Kingston worked the match.  The Dudleys won via DQ when they gave Kofi Kingston the 3-D, but Xavier Woods.  The New Day set up a table and Michael Cole they were hypocrites since they were talking about saving.  Devon fixed the leg of the table they were setting up.  They put Woods through the table after the match.  The pop for the table break was good.  Match was entertaining, as much Woods antics at ringside as anything. The New Day, in particular Woods, is the greatest act in pro wrestling, PERIOD. Woods had his hair done like Rufio from Hook, and his trombone playing was sensational. I love these guys. Kofi and Big E have upgraded significantly.

Rusev vs. Dolph Ziggler
The finish was Summer Rae was kicked out by the ref and Summer threw one of her shoes at the ref, who moved and it nailed Rusev, who was then pinned with a Zig Zag.  Rusev was so mad he left without Summer Rae.  Dolph Ziggler left without him as well.  There were some missed spots but the match had good heat. 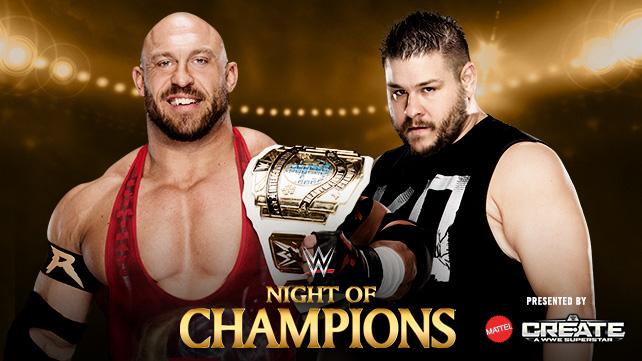 WWE Intercontinental Championship:
Ryback (c) vs. Kevin Owens
Owens won the title with an eye rake when he was up in shellshock and then schoolboyed him for the pin.  Most of the match was Owens working on the left arm and shoulder.  Match was okay, but I'm just happy they gave Owens the IC title. I hope they allow him to defend it in great matches every week, like his version of the Cena open challenge. Then it should eventually set up a unification match between the two down the road.