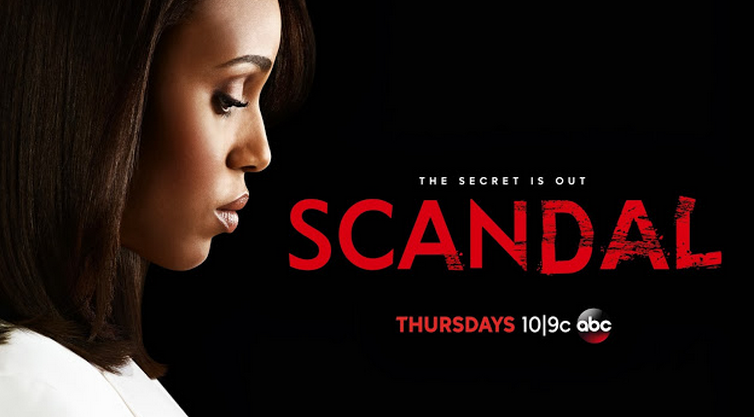 By: Larry Causion Jr.    CausionCreations.com
Posted: Tuesday, May 19, 2015
Man oh man was this a tough decision. I tell you, last week was one hell of a week for great TV. I tip my hat to ABC, as the consistently put out some of the best TV shows, period.

My pick for best show I watched last week came down to the season finales of Scandal and American Crime, and both were excellent. Let's look at both for a second.

American Crime was a superb hour of intense TV. The payoffs to the season long story lines was sensational. In the end, we never really found out who killed Matt and who assaulted Gwen, but the events and series of issues that spiraled from that were devastating.

In the final hour, Russ kills Carter, then himself, Aubrey kills herself, Alonzo and Hector get their lives on track, and the rest are picking up pieces. Overall, it was a hell of a finale.

But the best show I watched last week was Scandal.

So much happened. Poppa Pope is a bad sum bitch. This guy is the definition of the perfect TV villain and he came through once again, showing how far his reach can go. The episode gave us answers and way more questions, exactly what a season finale should do. Let's discuss in detail what happened.

In order to stop these secrets from reaching the media, Papa Pope has a proposition for Millie; reveal the list of names currently sitting on the B-613 trial jury.  Of course Millie, wants to protect herself most of all, so she agrees.

In a classic, dark and twisty Scandal moment, Olivia, Huck, Jake, David, and Quinn arrive at a bus load full of slaughtered B-613 jurors. The case seemed to be all but dead now. The scene was crazy. Olivia seems to be hitting her breaking point and wants to take Papa Pope down with every fiber of her being. Olivia continues to dominate Scandal week after week and this finale may have been one of her strongest performances this season.

Meanwhile, Millie can’t contain her knowledge of killing the jurors so she goes to the only man she can trust: Cyrus. And of course we all know she can' trust him, but you know, she's dumb. Cyrus of course has a panic attack and knows exactly who is behind these killings. So in true self preservation fashion, Cyrus arranges a plan to have Olivia and Jake arrested when they try to disclose B-613 secrets to the CIA.

Then Cyrus blackmails David Rosen into stopping his B-613 case by threatening Abby’s life. He also blackmails Jake by threatening his mother and tells Olivia he will rip apart Pope & Associates with everything he has. And if that isn't enough, Rowan and Cyrus also give Mama Pope her freedom.

Millie wins Senator of Virginia and a lot of that is thanks to Fitz’s unconditional love and support of his wife. Elizabeth tells Fitz that Millie was the one who helped kill all the jurors and that her main donor was Papa Pope. Fitz gets pissed and kicks Millie out of the White House and says he will not help her become President of the United States.

Talk about an ultimatum. What does this mean for Millie and Fitz’s perfect ending? And is everyone’s most deranged but highly lovable couple really done? Goldwyn comes to the forefront of this episode, which is refreshing considering he hasn't played a major part in season four. This episode got back to basics for Goldwyn and it was something fans were really missing this season.

The last ten minutes of this Scandal finale seemed to be the wildest ride to date. Every character was left hanging and most of their futures seem quite unclear when the episode comes to an end.

Olivia finally gets the justice she has been searching for when she has the police arrest Papa Pope for funneling money from the Smithsonian for the past few years.

Quinn pulls a gun on Huck after she realizes that he was the one that killed all the jurors for Command. We never got a follow up to that so that will be interesting next season.

Fitz fires Cyrus after he tells him that knows he was behind everything that happened with Rowan and how he was withholding information and pulling strings. Elizabeth has now taken his job. LOL.

Jake decides his days with Olivia are done. He tells her he loves her but she loves Fitz, and he can't be second fiddle any longer. Amazing how quickly he recovered from all those stab wounds.....

Scandal season four ends on a surprisingly happy note for Fitz and Olivia. In a moment four years in the making, Fitz and Olivia stand on the front porch of the White House and take in the sun. They are finally in a spot where they can be together and all seems right in the world. Until next season.

Come next season, every character will be in a new position and fans cannot wait to see where the show goes from here. Absolutely the best thing I watched last week.