​Check out my thought's on some of the main headlines from around the league on Sunday. What a crazy day, with injuries, upsets, and no shows. 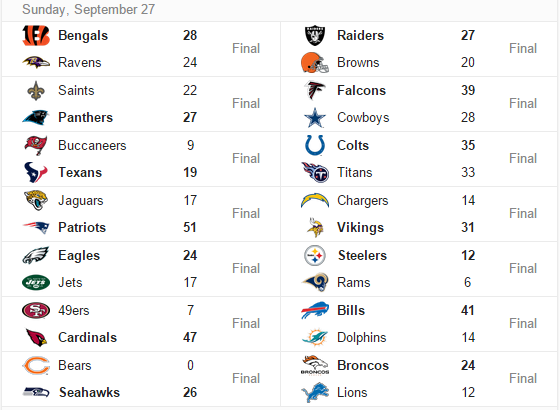 Panthers hold off Saints
The Saints came out playing hard, even without their leader Drew Brees. you have to give them credit as they showed heart and put up a fight in Carolina.

But the Panthers defense continued their undefeated streak with a good comeback win. Of course, they should have never been down to be begin with, but give them credit for finishing the job in a clear trap game.
Patriots look like 2007 Again
Tom Brady is clearly on a mission. He is giving the league the middle finger and he is on pace to shatter any record left standing. The run game was powerful as well, as big Blount was in the endzone 3 times.

At this point, there is a real possibility this team could go undefeated. Brady is playing like a real MVP, and really that isn't debatable.
Eagles Sore.. Finally
Philly beat the Jets to get their first win of the year and they did it by finally getting a running game going. Ryan Matthews was impressive, and they were able to work he and Sproiles to perfection, without DeMarco Murray.

The Jets defense got hit in the mouth. Revis left with a groin injury and strain calf, and his injuries continue to pile up. Chris Ivory was out, so its tough to really count this to bad against the Jets.
Cardinals are for Real
The Arizona Cardinals don't just beat their opponents, they punish them. To me, they are clearly the most complete team in the NFC. It was great to see Chris Johnson flashback to old ways yesterday and Larry Fitzgerald continues to play at a high level. And that defense? Crazy good.

Collin Kappernick threw 4 picks and looked lost out there. The 49ers are bad.
The Legion of Boom is Back
Kam Chancellor brought the boom back yesterday and the Seahawks pitched a shut out. The offense wasn't great, Lynch didn't play, but that defense was dominant. If Seattle plays like this, they will be back in the Superbowl again.
Falcons Comeback Again
The Atlanta Falcons are never out of a game. When you have a high powered offense that can score points in bunches, you are always in the game. Julio Jones is a beast, and yesterday, he put on another clinic.

Give Dallas credit as they came out running that rock to perfection. Randle had two touchdowns before you could blink. But the defense, which was supposed to be their strong suit, got torched and gave up big play after big play. Atlanta is for real though.
Colts Pull off the Comeback
Give Andrew Luck credit. he played like straight trash for the majority of the game, but deep in the 4th quarter, when it really mattered, he got it done. The Colts are not that good, like I said, but they got a good win on the road.

The Titans are not a bad team at all. Mariotta is going to a pro bowl QB in this league and I like what I have seen so far.
Big Ben Out for 6 weeks
Sad news about Big Ben's injury. That video was sick. As much as I hate the Steelers, I wish injury on nobody, and he's my fantasy QB. Smh.
Bills Look for real
I really like the Bills. They picked up a great win on the road, within the division and bounced back nicely after the tough loss to New England last week. Tyrod Taylor is turning out to be a pretty good game manager and their running was clicking.

Miami looks bad. That defense, which was supposed to be improved with Suh, got punked yet again, and they looked out of their league.
Don't worry about Peyton's Arm
People need to stop worrying about the Broncos offense and pay attention to that defense. On all three levels they have playmakers and they can hang with anybody. Manning is doing just what he has to, and the Broncos are 3-0.

​The Lions. Smh. I just can't with these guys. Wasted talent.