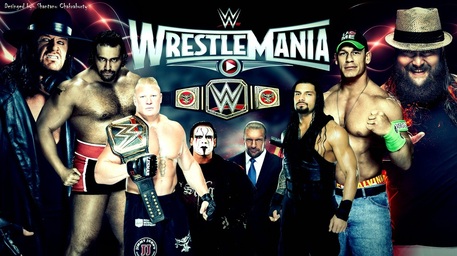 The Broken Road to Wrestlemania: Part 1

By: Larry Causion Jr.    CausionCreations.com
Posted: Tuesday, March 17, 2015
Over the next few days, I will be writing a series of articles expressing my issues with the build to this years Wrestlemania. Today, I begin by giving you some background on my knowledge of the professional wrestling business.

I have been a professional wrestling fan since I came out my mother's womb. Growing up, more than any sport, I loved wrestling.

I have been a faithful viewer and follower of everything from the WWF, NWA, WCW, AWA, ECW, ROH, TNA, All Japan, NOAH, and New Japan Pro Wrestling. I used to trade tapes with people from all over the country so I could keep up with local promotions. I was the most hardcore of hardcore fans.

But like many wrestling fans, my true favorite promotion was always the WWF. Largely due to one attraction, Hulk Hogan. Hogan captivated me as a kid and I was hooked. As time went on I was exposed to other organizations, and my mind for the business and psychological part of the industry grew immensely.

I wanted to give you my background on the subject so you will understand that I am not speaking on it as a casual fan who doesn't attempt to really know what he is talking about. Contrary to what some may tell you, there is a formula that makes this form of entertainment work. Is it always easy to accomplish every goal? No. But it has been done and can be done again, if executed correctly.

This year's Wrestlemania is less than two weeks away, and simply put, I'm not impressed. Would a casual fan be impressed, probably. But I'm not a casual fan.

What Vince McMahon is doing to this company that I have loved all my life may be worst than anything he has ever done before. No it's not about a stupid story line, for we have seen many of those in the past. It's not about a guy being held down, or another guy being over pushed, for that has happened for years.

Apathy is defined as showing a lack of interest, enthusiasm, or concern. Fans are no longer outraged or moved to care either way, for they expect nothing special to occur.

Over the next few days, i will be breaking down the Wrestlemania lineup and explaining how Vince McMahon is slowly draining the popularity of the company I once loved.