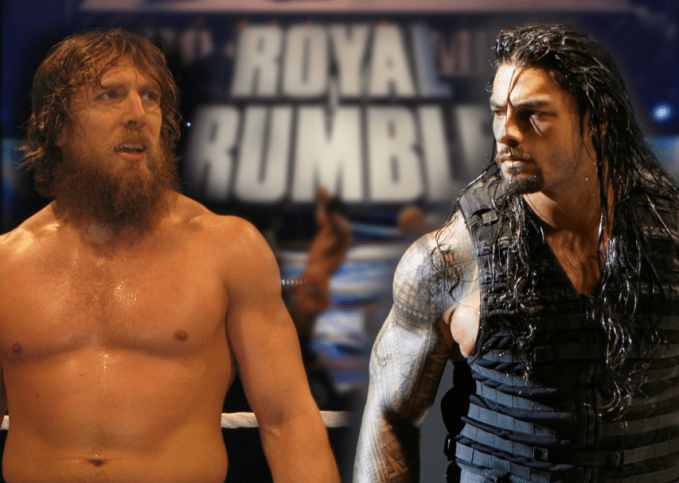 The Broken Road to Wrestlemania: Part 6

By: Larry Causion Jr.    CausionCreations.com
Posted: Wednesday, March 25, 2015
At WWE's TLC PPV in December 2014, a miracle happened. Daniel Bryan returned to announce that he was cleared to wrestle and would be entering the 2015 Royal Rumble match.

For months, it had been speculated that Bryan possibly would not be able to return due to neck and arm complications after multiple surgeries. Bryan had been out of action since June, and the announcement of his return was both a huge shock and a well received surprise. The fans were excited and anticipated a huge Royal Rumble win for the returning hero.

Well, the problem was, that wasn't Vince's plan.

As we talked about in previous entries, the plan was for Roman Reigns to win the Royal Rumble and go on to defeat Brock Lesnar at Wrestlemania. But so much had changed since that initial plan was drawn up.


Well, the final nail was the fact that not only did they announce Bryan was coming back in advance, they announced he would be in the Royal Rumble match. This announcement could only result in one satisfying ending, and that was Daniel Bryan, the man who never lost his title, returns, wins the Royal Rumble, and goes on to face the champion at Wrestlemania.

Well, that's not what they did.

Instead, Bryan entered the Rumble early, the fans exploded. Bryan was eliminated, the fans were furious. Then they proceeded to absolutely sh*t on the entirety of the Royal Rumble match.

It was the worst example of knowing your audience I have ever seen in all my years of watching wrestling. Even fan favorites were boo'd furiously. The fans were pissed and they were going to let Vince McMahon know that they had enough of him shoving what he wanted down their throats.

Nobody was boo'd more than the guy who was groomed to be the next huge baby face, Roman Reigns. He was boo'd from the moment he walked down the ramp, every time he hit a move, and when he won, the fans revolted.

Even more substantial, in an attempt to give Reigns a rub, they brought the Rock in to assist his cousin take out Big Show and Kane, and even the Rock was showered with boos. Reigns was toxic and it was obvious why. It wasn't really about him at all, it was about the fans wanting Daniel Bryan, and Vince refusing to grant them their wish.

So one might say, why wouldn't he just give the people what they want. Honestly, I could write a book answering that question. But simply put, in the eyes of Vince McMahon, unless you look a certain way, you can't be his guy.

The fans vocally expressed how upset they were with the Royal Rumble result. They took to social media and the number 1 trend in the world for the next 2 days was #CancelWWENetwork. Fans were angry and they wanted their voice heard.

Eventually, Vince had no choice but to acknowledge the fans anger. So to appease them, he created a story line where Daniel Bryan would face Roman Reigns, and the winner would go on the Wrestlemania to face Brock Lesnar.

Nobody bought it. It was all an attempt to hush the backlash. In the end, Reigns defeated Bryan at WWE Fast lane, after Bryan carried him to a good main event. And the next night, Bryan endorsed Reigns as a deserving number 1 contender. Bryan did what the company wanted. Reigns is the guy Vince chose, so he did his best to get him over.

Well, that failed. The Wrestlemania Main event is set and it will be Roman Reigns challenging Brock Lesnar for the WWE World Heavyweight title. The match Vince envisioned a year ago.

But the crowd has not gotten on board. Reigns is either boo'd or given the silent treatment. And there is nothing worst than your main event star being received with apathy. Even when John Cena gets boos or Cena sucks chants, he invokes some type of emotion out of the fans. Reigns, is floundering and looks out of his element.

One thing for sure, the events of this week guarantee one thing. In San Francisco, at Wrestlemania 31, Brock Lesnar will be the biggest baby face the company may have ever seen.

Check out part 7, as we take a look at the final build to Wrestlemania, including a huge development as it relates to the contract of Brock Lesnar. We will also examine and breakdown the entire Wrestlemania card, and set the stage for this Sunday.