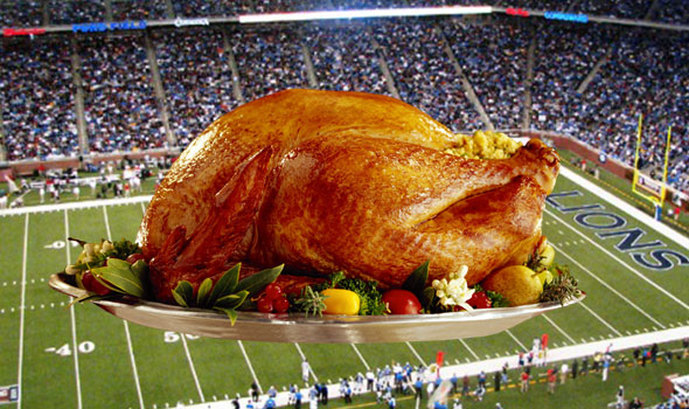 By: Larry Causion Jr.    CausionCreations.com
Posted: Thursday, November 26, 2015
I love Thanksgiving for the obvious reason, you know, the food. No work, sleep late, and watch three NFL games. What part of that is not perfect? Having to watch the Dallas Cowboys and the Detroit Lions... again!

The Cowboys have at least been relevant to the playoffs, and its always at least fun to see them choke away games, but the Lions almost always suck. So, why do the Lions keep earning the right to host a Thanksgiving Day game?

Professional football games have been played on Thanksgiving for more than 100 years. Several National Football League games were played in the early years but didn't have a national radio audience and were well before television. But in 1934, in an effort to boost attendance for his recently transplanted Lions team, owner George Richards scheduled his Detroit team for a game against the rival Chicago Bears. Richards also owned a major Detroit radio station, and persuaded NBC to carry the game nationally. A great turnout at the stadium and a respectable radio audience started the long tradition of Lions football on Thanksgiving.

Some of the original professional teams were frequent opponents for the Lions in those early games. The Chicago Bears battled the Lions often, followed by a stretch of 13 games against the Green Bay Packers.

When the NFL wanted to add a second game, Tex Schramm, the longtime president and general manager of the Cowboys, saw an opportunity to start a tradition. As a hedge for the risk of low attendance in the first year, Schramm negotiated a long-term commitment from the league for his Cowboys to host the annual game.

Now, the politics. When the NFL and the AFL merged in 1970 with the teams in the NFL becoming the National Football Conference and the AFL teams becoming the American Football Conference league officials wanted both conferences to be represented in the holiday games. As a compromise, Dallas and Detroit, both NFC teams, continued to host the two games, but one of them had to face an AFC opponent.

Television contracts also had an impact on the current schedule. Currently, Fox Sports has the rights to all NFC games while CBS broadcasts AFC games. So that each network can have a Thanksgiving game, Dallas and Detroit take turns playing an AFC team each year, providing one NFC-NFC game and one NFC-AFC match up. Over the years, the grumbling of fans about this arrangement has been heard by the NFL. In 2006, the NFL added a third game featuring a rotating selection of teams.

That third game has become a big deal the last few years, as its usually two good teams that are rivals. This year we get the Packers vs Bears, and though the Bears aren't great, Aaron Rodgers is box office.

Still, food, family and football combine to make a near-perfect day for which we can all be thankful! That, and if your favorite team is playing the Lions. But what am I saying, I thank God the Ravens aren't on display of Thanksgiving this year. Let me enjoy my day without the stress.