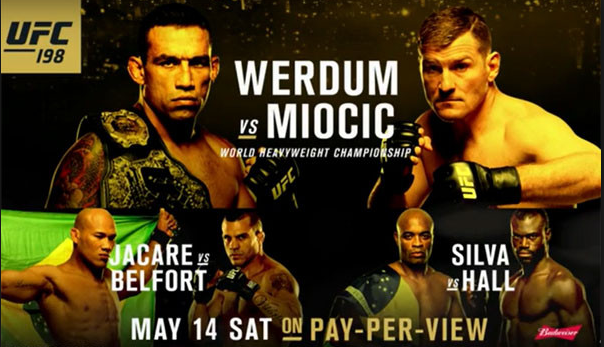 By: Larry Causion Jr.    CausionCreations.com
Posted: Tuesday,  May 17, 2016
Credit:  Ryan Frederick
Due to illness, Anderson Silva was forced out of this Saturdays loaded UFC 198 show due to an abdominal issue that resulted in him needing emergency gall bladder surgery last week. He was set to face Uriah Hall on the main card from his hometown of Curitiba, Brazil.

While losing Anderson Silva subtracted the real headliner from the show, it still featured plenty of talent and great fights, and crowned a new UFC heavyweight champion. 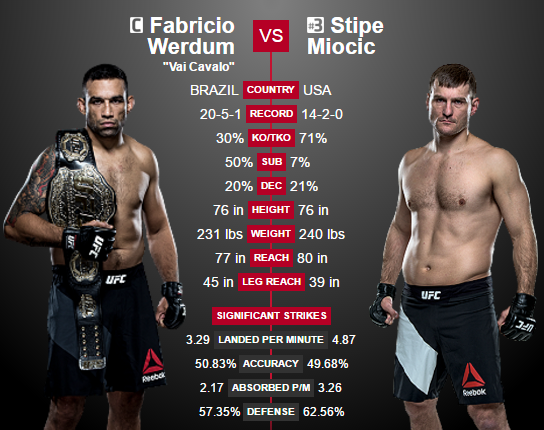 Official Result- Stipe Miocic def. Fabricio Werdum by knockout (punch) at 2:47 of Round 1 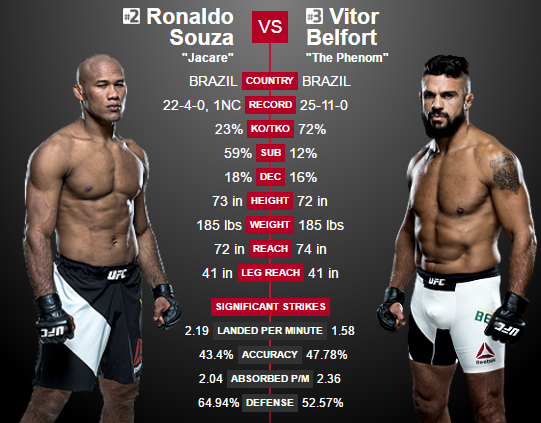 ROUND 1- Big fight that could determine next middleweight title challenger. Souza with a body kick. Belfort fakes a flying knee and stuffs a takedown attempt. They clinch against the fence and Belfort lands a knee. Souza gets a takedown and is on top against the fence. Souza with short elbows from the top. Belfort is cut open and bleeding pretty badly right now. They call timeout at a wrong time for the cut to be checked. The doctor clears Belfort and they continue in the position they were in. Souza passes guard and Belfort ends on top and they scramble to the feet. They are clinched against the fence. Belfort pulls guard and Souza lands from the top. Belfort with a couple of upkicks but Souza is landing a lot from the top. Souza in mount and landing big elbows and punches with less than a minute left. Belfort in a lot of trouble. Souza with more punches from the top and the fight is stopped. Souza gets the TKO win in a dominant showing.

Official Result- Ronaldo Souza def. Vitor Belfort by TKO (strikes) at 4:38 of Round 1 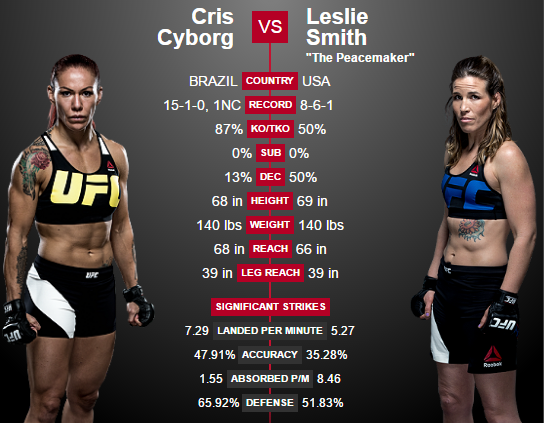 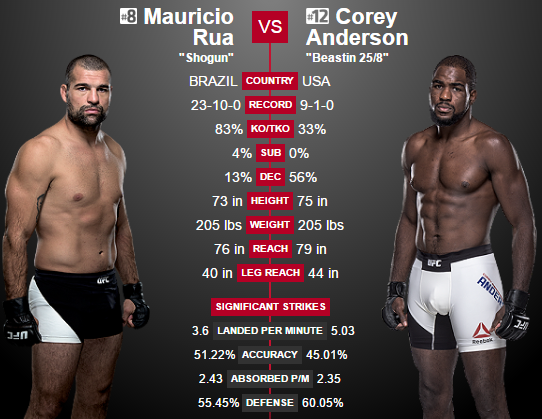 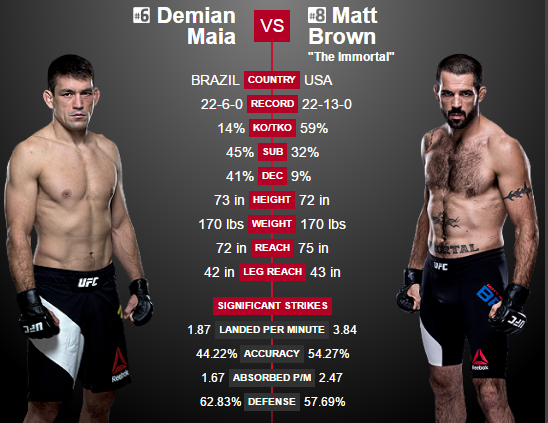 ROUND 1- Brown got hit by some fans during his walkout and actually threw a punch back at one. Brown with a right hand. Maia shoots for the takedown and gets it and this is his world. Maia moves to the back. They are standing and Maia has the back and putting pressure on Brown's knees. They go to the mat and Maia still has the back of Brown. Maia looking for the choke but Brown defending. Maia with punches from the back. Maia looking for the choke yet again. Maia with more punches from the back as he looks to get his arm under the neck. Brown looks to reverse and now has the top as Maia looked for an arm. 10-9 Maia.

ROUND 2- Maia goes right back for a takedown but Brown defends. Maia goes right back for another and drives Brown to the fence and has a single leg. Maia gets the fight to the mat. Maia has the back again. They get to their feet but Maia trips them back to the mat and still has the back of Brown and is looking for the choke. Maia with punches from the back. Brown is looking for a stand-up but isn't going to get it. Maia with more punches from the back. Brown is able to get on top and land punches as the round ends. 10-9 Maia, 20-18 Maia.

ROUND 3- Maia goes for a takedown but it is defended. Maia with a left hand and misses another takedown attempt. Maia with a right hand and goes for a takedown. Brown lands some punches and they get to their feet. Maia looking for a takedown again. They go to the mat and Brown is on top. Maia ends up on top in a scramble. Maia flattens Brown out on the mat and is in the guard. They get to their feet and Maia takes the back of Brown. They go back to the mat and Maia is looking for a choke yet again. Maia still looking for the choke. Brown has defended the choke well all fight. Maia with more punches from the back. Maia has the arm under the chin and the choke is tight. Brown submits! Maia gets the win by rear-naked choke and the crowd goes wild. 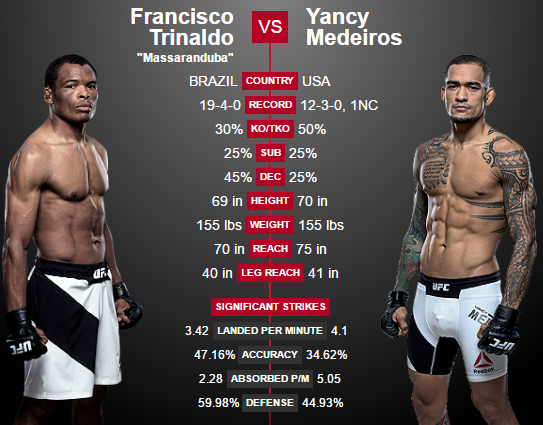 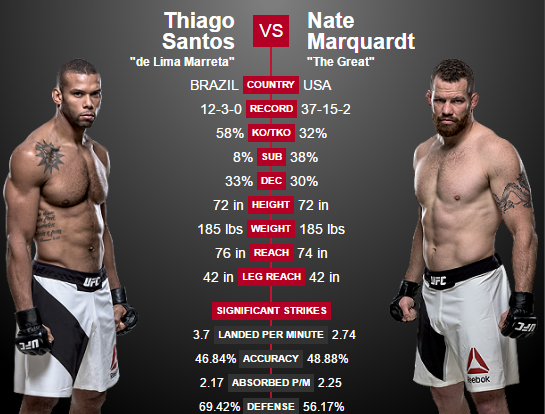 Official Result- Thiago Santos def. Nate Marquardt by knockout (punches) at 3:39 of Round 1 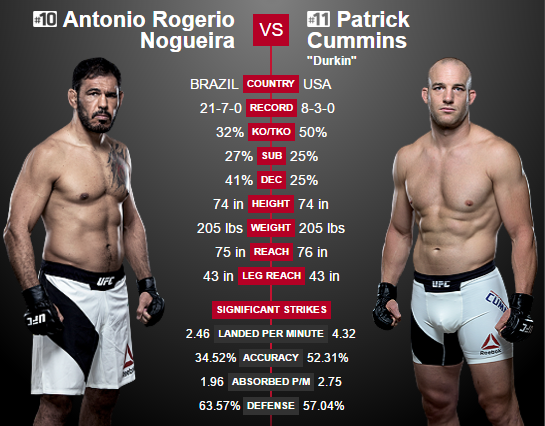