By: Larry Causion Jr.    CausionCreations.com
Posted: Sunday, April 5, 2015
Our series concludes as we celebrate the day new life began. Today, Resurrection Sunday, or Easter as many call it, is the day we remember Jesus conquering death and rising from the dead.

Christians all over the world are celebrating the risen Savior, Jesus Christ in all his glory. In churches all over the world, some people are assembling for maybe the only time all year, dressed in new outfits in recognition of this "holiday", with many not really giving the meaning of the day it's full due.

Easter is not about a bunny or new set of clothes and shoes. Easter is about the Resurrection of Jesus Christ. On Good Friday, He died, and was buried. On Sunday morning, the stone was rolled away and Jesus walked out of the tomb. He is no longer dead, for He is alive.

57 When the even was come, there came a rich man of Arimathaea, named Joseph, who also himself was Jesus' disciple:
58 He went to Pilate, and begged the body of Jesus. Then Pilate commanded the body to be delivered.
59 And when Joseph had taken the body, he wrapped it in a clean linen cloth,
60 And laid it in his own new tomb, which he had hewn out in the rock: and he rolled a great stone to the door of the sepulchre, and departed.
61 And there was Mary Magdalene, and the other Mary, sitting over against the sepulchre.
62 Now the next day, that followed the day of the preparation, the chief priests and Pharisees came together unto Pilate,
63 Saying, Sir, we remember that that deceiver said, while he was yet alive, After three days I will rise again.
64 Command therefore that the sepulchre be made sure until the third day, lest his disciples come by night, and steal him away, and say unto the people, He is risen from the dead: so the last error shall be worse than the first.
65 Pilate said unto them, Ye have a watch: go your way, make it as sure as ye can.
66 So they went, and made the sepulchre sure, sealing the stone, and setting a watch.

1 In the end of the sabbath, as it began to dawn toward the first day of the week, came Mary Magdalene and the other Mary to see the sepulchre.
2 And, behold, there was a great earthquake: for the angel of the Lord descended from heaven, and came and rolled back the stone from the door, and sat upon it.
3 His countenance was like lightning, and his raiment white as snow:
4 And for fear of him the keepers did shake, and became as dead men.
5 And the angel answered and said unto the women, Fear not ye: for I know that ye seek Jesus, which was crucified.
6 He is not here: for he is risen, as he said. Come, see the place where the Lord lay.
7 And go quickly, and tell his disciples that he is risen from the dead; and, behold, he goeth before you into Galilee; there shall ye see him: lo, I have told you.
8 And they departed quickly from the sepulchre with fear and great joy; and did run to bring his disciples word.
9 And as they went to tell his disciples, behold, Jesus met them, saying, All hail. And they came and held him by the feet, and worshipped him.
10 Then said Jesus unto them, Be not afraid: go tell my brethren that they go into Galilee, and there shall they see me.

Without the blood that Jesus shed for you and I, there would be no remission of sin. He paid the price that we may be forgiven. He took our place as the ultimate sacrifice. Jesus died, and was buried, and then he rose from the dead.

The Resurrection of Jesus Christ is the true meaning of Easter, and we must train the future generation the purpose and meaning behind these holidays we celebrate. 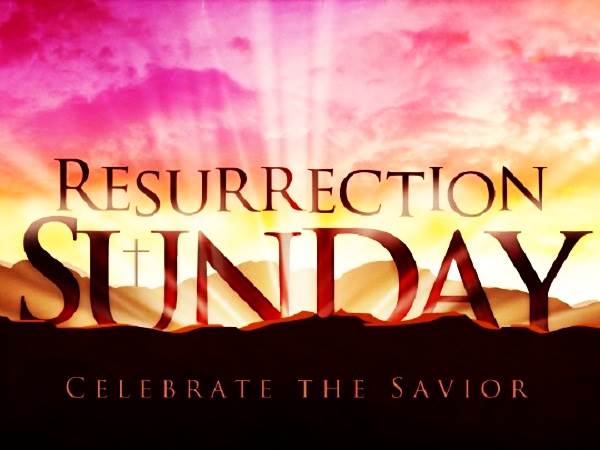