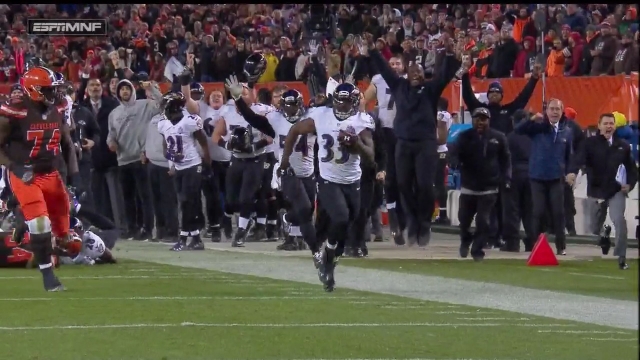 Last night the Baltimore Ravens traveled to Cleveland to take on the Browns for their second meeting of the season. In game 1, the Ravens blew a 4th quarter lead and lost in overtime to the Browns, when Josh McCown threw fro damn near 500 yards on that Ravens defense. Last night's contest featured what looked like a totally different Ravens team, and this time, they pulled out a victory.

This game was way more entertaining than it had any right to be. Both offenses moved the ball well, we saw some big plays on special teams, which was the key to the game, and Matt Shaub showed us just why he was once a Pro Bowler in this league, and also no longer a starter.

The Ravens took the field without their number 1 quarterback, Joe Flacco, for the first time since 2008. He had never missed a game in his career. They were without Justin Forsett, their number 1 running back, and no Steve Smith, their number 1 receiver. And still the Ravens were able to pull out a victory on the road, to pull their record to 4-7 on the year. And it was because of this play.
Man, I tell you, the roller coaster of emotions this team puts us through every week will knock 15 years off your life. I am writing this at 1:30am, because I'm so pumped up. They had a lead, then blew it, then almost threw the game away with a late Shaub interception. Then, blocked the kick and walked off with a victory. You can't make this stuff up.

We are not a good team. I'm no blind, I know that. But this team never gives up. No matter what, they are in every game because they are scrappy and they fight until the very end. How can you not respect that. People say they should tank the season so they get a better draft pick. Smh. Excuse my language but F*ck that!!!! We are a winning franchise and we are not built to quit.

We may not have the best talent this year, we may have injuries up and down the roster, we may even be out coached at critical times. But when you put on that uniform, its something about being Ravens and playing like a Raven that makes you have balls. It makes you stand up and fight like real men should. Ain't no tanking around here!!!!