By: Larry Causion Jr.    CausionCreations.com
Posted: Monday, March 16, 2015
It's that time of the year where all the so called "college basketball experts" at work fill out their NCAA tournament brackets. I have been a fan of college basketball for as long as I can remember, but I must admit that there has never been a year quite like this. Usually when looking at my bracket, I can clearly point out a few upsets just off of school history and ebbs and flows of what I have seen during the season.

But this year, I only have one word to say, Kentucky. I don't see any other outcome. Nobody else is a serious threat to them in my opinion. John Calipari has once again assembled a great team filled with NBA talent, that will not stay in school more than a year or two. And the trend is growing.

Even as someone who follows the game regularly, I can't keep up with the rotating rosters year after year. But one thing I do know is, Kentucky is undefeated for a reason, and I believe they will run the table.

Of course my heart is with my Maryland Terrapins, and I will be rooting for them like crazy to pull off the upset. But they just have not shown me that they are ready to take that next step consistently. I wish they were and hope they prove me wrong.

So feel free to look at my bracket below. One might say that it's pretty much chalk, and you would be correct. I will be submitting various brackets in the 4 pools I'm participating in this year, and they all won't look like this. But one thing will pretty much remain a constant.... Kentucky. 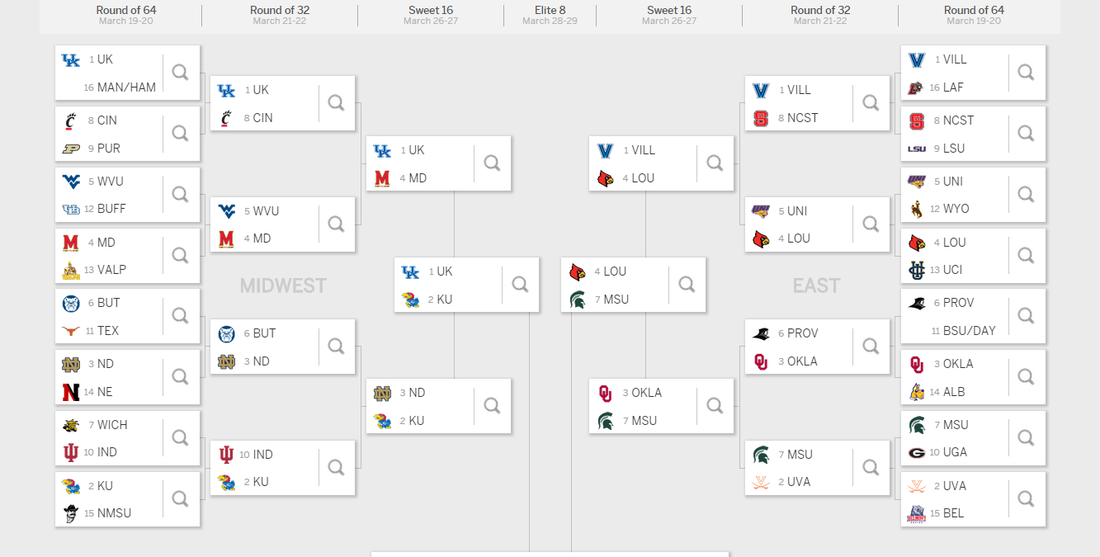