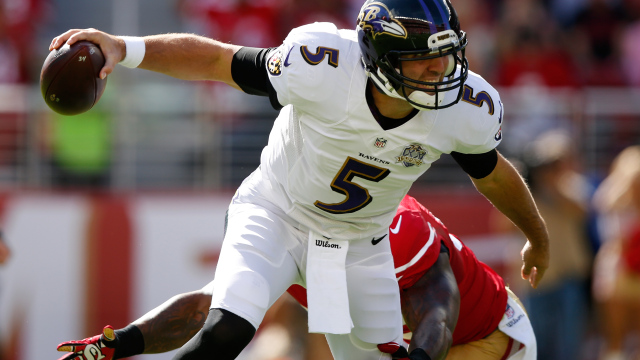 The Baltimore Ravens were defeated for the 5th time this season yesterday, this time at the hands of the San Francisco 49ers by a score of 25-20.

Joe Flacco threw 2 interceptions which were turned into 6 points by the 49ers, the defensive back Shareece Wright, was beat fro two touchdowns, and kicker Justin Tucker missed a field goal late in the game which would have made a field goal enough to win in the end.

But there were so many reason why the Ravens lost this game it can't pinned on one person. Penalties on 3rd down were crucial, dropped passes in the end zone were costly, blown assignments were again prevalent, injuries played apart yet again, inability to cover receivers was still a problem, quarterback making dumb decisions hurt us, and the inability to stretch the field was key once more.

I could rant and rave via video, but honestly, its irrelevant. The Ravens just are not that good. That is the bottom line. The lack of fire power, a secondary, and a consistent imposing pass rush equals not that good.