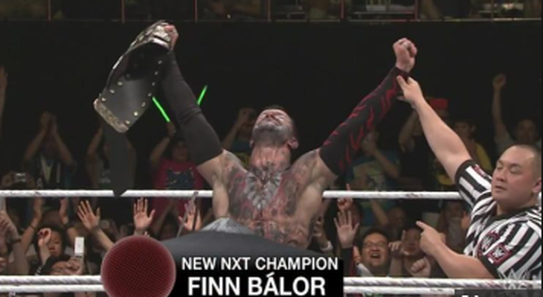 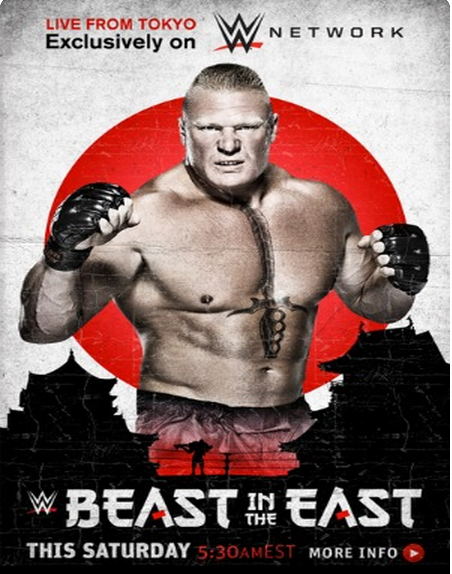 - A short video package starts us out highlighting that this is Brock Lesnar's first match since Wrestlemania and the Kevin Owens vs. Finn Balor NXT title match later on.

- Michael Cole and Byron Saxton are the announce team. Show is airing live from Sumo Hall in Tokyo with a typical house show set with no ramp.

Cole and Saxton talk a little about the history of the building with combat sports and Jericho's past in Japan where he got the name 'Lionheart'. Saxton even talks about Neville's history with Dragon Gate which helped bring him to this point. The match was fairly even early until Jericho got the advantage off a back and forth exchange with both guys teasing and preventing jumps to the inside. Jericho eventually hit the second rope dropkick to Neville on the apron. He had a few heel mannerisms, but both guys were loved by the crowd.

Jericho went for a top rope superplex which Neville blocked for a flapjack. Neville stayed on the top and went for the Red Arrow, but Jericho moved so Neville landed on his feet. He went for a hunacarana which was blocked for the Walls of Jericho. Neville fought and fought and made it to the ropes for the clean break.

Neville with a jumping, twisting dive over the top to Jericho on the outside. Neville tossed him back in and hit a top rope clothesline and a standing shooting star press for a near fall. Jericho nailed Neville with a uppercut and hit the Lionsault for two. Neville got the advantage back and launched himself into a Codebreaker.

Neville hit two superkicks and went for the Red Arrow, but Jericho put his knees up. He applied the Liontamer for the tap. The match went nearly twenty minutes and was fantastic. I really enjoyed it.

- Brock "Tucked In T-Shirt" Lesnar is shown walking into the building, making his first appearance in Japan for WWE in more than 12 years. We st

- I gotta say that this whole house show on TV feel is very refreshing outside the constant reminders that #BeastInTheEast is trending no. 1 in the world on Twitter. I watch to get away from the real world, but I get it.

- After RAW this Monday, we get a live 'The Legendary Stories Of Dusty Rhodes'. Sounds good to me.

Cole references a past women's title change in Japan by Bull "Nakona" before Saxton corrects him. Tamina and Page went at it for a bit until Bella got back in the fray and the two teamed up to get Tamina out of there. They were certainly trying to up the aggression level with lots of women's tennis-esque grunting.

The big spot of the match was a Tamnia powerbomb of Bella as she was superplexing Paige off the top rope. As Paige and Bella were setting it up, you could hear them talking. Ugh. Paige applied the PTO but Tamina superkicked her and hit a Samoan drop on Bella to break it up. She missed a Superfly splash attempt and Bella hit a running forearm for the pin and win.

I don't watch a ton of, ahem, Divas matches but this wasn't that bad. Not much of a story, but it was fun for what it was.

It took them 36 minutes to mention Lesnar's opponent for tonight. As Lesnar was walking out, they showed Seth Rollins and The Authority's attack on him from several weeks ago, but his knee isn't wrapped. Kingston was trying to avoid Lesnar, but once "The Beast" got his hands on him, it was bad news. Kingston got a lot of offense on Lesnar, but none of it worked. He avoided one belly-to-back suplex (flipped out of it), but was unsuccessful in avoiding three others. Lots of stalking around led to an F5 and the pin and win.

As Lesnar was leaving the ring, he looked at Kingston and came back in the ring for another belly-to-back and F5. This brought out Xavier Woods and Big E from the back and they both got F-5'ed for their trouble.

Kevin Owens was seen in the back prepping for his match with Finn Balor. That match is next, preceded by a good video package highlighting the backstory.

As expected, Balor is in full warpaint, complete with Japanese writing on the back. Hideo Itami is shown sitting in the crowd as Owens enters in full heel mode. Tons of treamers come into the ring as we get the announcements of both guys as do two ladies who hand giant bouquets to both guys. Owens tosses the flowers in the aisle. Streamers (and tradition!) on WWE TV? This is something else. Cole even talked about how Balor lives in a dojo, that Balor used to go by the name Prince Devitt, and the IWGP titles he won.

Balor started out the match quick, teasing the Coup De Grace in the first 10 seconds. Action spilled to the outside where Balor hit a running dropkick to Owens who was sitting in a chair by the barricade. As Owens reclaimed the advantage later on, he played to the crowd big-time and they gave him what he was looking for: boos. The champion dominated most of the action midway through the match, teasing a running knee into a bracing Balor and locking on a rear chinlock instead. He said, "I hate this country and everyone in it." Heel!

As Balor was rallying, Owens stopped him and hit the Five Moves Of Doom, but fell short of hitting the Attitude Adjustment. Both guys hit all of their signature moves late in the match including Owens' cannonball flip in the corner and package powerbomb. Balor hit the Sling Blade adn went to the top to finish Owens, but the champ made it to his feet to prevent it. Owens got kicked and laid out which led to the Coup De Grace....but we only got two. This match must continue!

Balor attempted a top rope superplex which Owens blocked, eventually hitting a second rope rolling senton which got two. Owens went for the senton bomb, but Balor got the knees up and got Owens in a Dragon suplex for two. Owens with a straight jacket suplex for two. Balor hit a big clothesline and dropkick into the corner to Owens, setting up again for the Coup De Grace. He hit it and this time, Owens didn't kick out. Balor with the pin and win and is your new NXT Champion.

Cole put over Balor's history in Japan huge post-match. This was a really fun match with great sequences that you would expect from these two, especially the near falls. Tatsumi Fujinami walked out from the back and attacked Balor post-match, demanding a title match at SummerSlam. Alright, that didn't happen but Fujinami did come out and raise Balor's hand. Owens was still in the ring looking pissed and refused to shake Balor's hand.

- We get footage of Friday's Fujinami ceremony on Tokyo with Itami.

Despite my apathy, the fans were into everything. You know, I got into it too. This was typical house show fare with all the guys playing to the crowd and not having to rush through things. When Cena was in there with Kane, it was power vs. power and Cena was actually psyching himself up to go in there and face him.

Cena was in there most of the match, getting abused by Kane and Barrett. Cena hit an A.A. on Barrett after powering out of a side chinlock, but Barrett tagged Kane. However, Cena got blocked by Kane on hitting an A.A. on him, building to what would eventully happen later in the match. Kane hit his top rope clothesline which led to another rear chinlock on Cena. Lots of rest holds in this one.

Ziggler finally got the hot tag and ran wild on Barrett, but a big boot from Barrett stopped that cold. Barrett and Kane worked over Ziggler for a bit until Ziggler eventually got the hot tag. Until we got to that point, there was a lot of good stuff including a big Kane powerbomb. I guess it was the jaded, worn out WWE fan in me, but I was amazed at how much the fans were into this match. I also haven't been to a house show event in nearly four years, so perhaps I shouldn't be that surprised. I also liked the subtleties of Barrett holding Ziggler's arm after tagging Kane so Ziggler couldn't get away. Tag team wrestling!

Ziggler got out of a Kane chokeslam attempt and hit a jumping DDT to get the hot tag to Cena while Kane tagged Barrett. Five Moves of Doom on Kane, Ziggler superkick to A.A. on the legal man Barrett for the pin and win for Team Good Guys. Fun match!

Two hours on a Saturday morning full of fun matches and mostly devoid of bad promos and typical RAW b.s.? I'll take it. Even Cole and Saxton were good and were supposedly trending on Twitter at one point. Cole had his 'working shoes', getting in references to WrestleFest during the show's final tag match.

Final recommendation: watch the entire show. I guarantee you'll have fun in doing so. And in the end, isn't that what this is all supposed to be about?