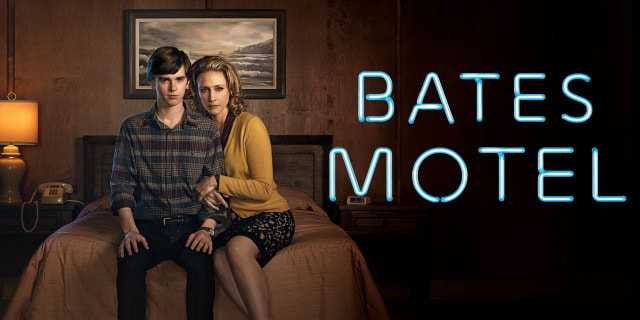 By: Larry Causion Jr.    CausionCreations.com
Posted: Monday, April 13, 2015
Without question, the best thing I watched on TV last week was Bates Motel on A&E. Those who watch the show know exactly what I mean. Finally we got some payoffs and new developments in the story lines we have been investing in for weeks.

Now I could go into detail and spoil it for those who haven't watched it yet, but I want you all to go give the show a try. You won't be disappointed.

Bates Motel always feels new and not like a cheap prequel to Psycho. While viewers of the movie series ultimately know what the fate of both of the main characters will be, we also don't have to worry about it coming anytime soon. Plus the show has its own liberty to create compelling story lines.

But the initial plot is simple. Mother and son, Norma and Norman, arrive in White Pines Bay, after leaving Arizona when Norman’s father is killed. Norma buys a motel and the house that goes along with it.

Norman has a thing for the ladies and throughout the series it seems like his infatuation with whatever female he has his eye on, often ends up with that woman being dead. Yea.

Norman has an older half-brother named Dylan, who initially doesn't have a good relationship with Norma. We later find out that Dylan is the son that Norma and her brother had together when her brother raped her as a youth. Yea, Crazy.

The relationship between Norma and Norman is very odd at times. You would think they were married. Norma clearly is smothering the boy. Norman looks at her through the window in her bra and underwear. They sleep in the same bed at times. She’ll often change her top in front of him, and when he gets uncomfortable, she says, “Oh, Norman, I’m your mother. It’s not like it’s weird or anything.” Yea, not at all. Freaks.

Norman has blackouts where he doesn't remember any of the terrible things he does. And normally when Norman blacks out, somebody dies.

Like I said, last weeks episode was superb and it really sets the stage for an excellent end to the season. If you have never watched Bates Motel, check it out from the beginning.

It is definitely a great series to follow, and my pick for best show I watched last week.