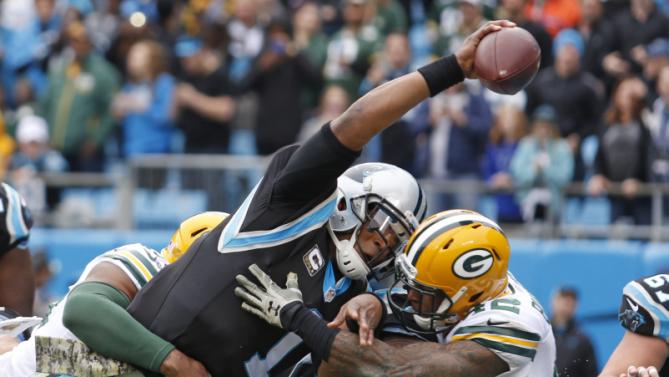 Panthers prove they are for Real

On Sunday, Cam Newton sent a message to the world, the Panthers are for real. They defeated the Green Bay Packers in a game that came down to a goal line stand by the defense, but the final score doesn't tell the entire story. The Panthers were up by 20 points on Aaron Rodgers and the Packers and proving to be dominant, before the Pack made a comeback.

But the story here is the Panthers. They nw own victories over the Seahawks in Seattle, and the Packers. With half the season to go, so far, they look to be the best team in the NFC.

That New Orleans Saints defense is simply pathetic. That is all.

Sundays game between the Raiders and Steelers was great and I give a lot of credit to both teams for playing their heart out. The Steelers were able to get a big win at home with backup Landry Jones leading the charge down the stretch. He was in because Big Ben went down with another injury. Its getting repetitive. At some point, you have to call the guy injury prone.

On another note, Antonio Brown is a beast. Simply ridiculous.

I really enjoyed the Vikings vs Rams game. Both teams play tough defense and run the ball with special backs. It was a battle of the best young back with Gurley and the best back in Peterson and it don't disappoint, ending in overtime.

The Vikings are a force to be reckoned with in the NFC.

The Colts ruined Peyton's return to Indy and they held him short of breaking the NFL all time passing record by three yards. Smh. Manning's interception late in the 4th was huge and it basically cost the Broncos their first lost of the season.

But give Andrew Luck credit. He was efficient and made big plays when it counted. Great win for a team that has been struggling. They lead the pathetic AFC South with a losing record.