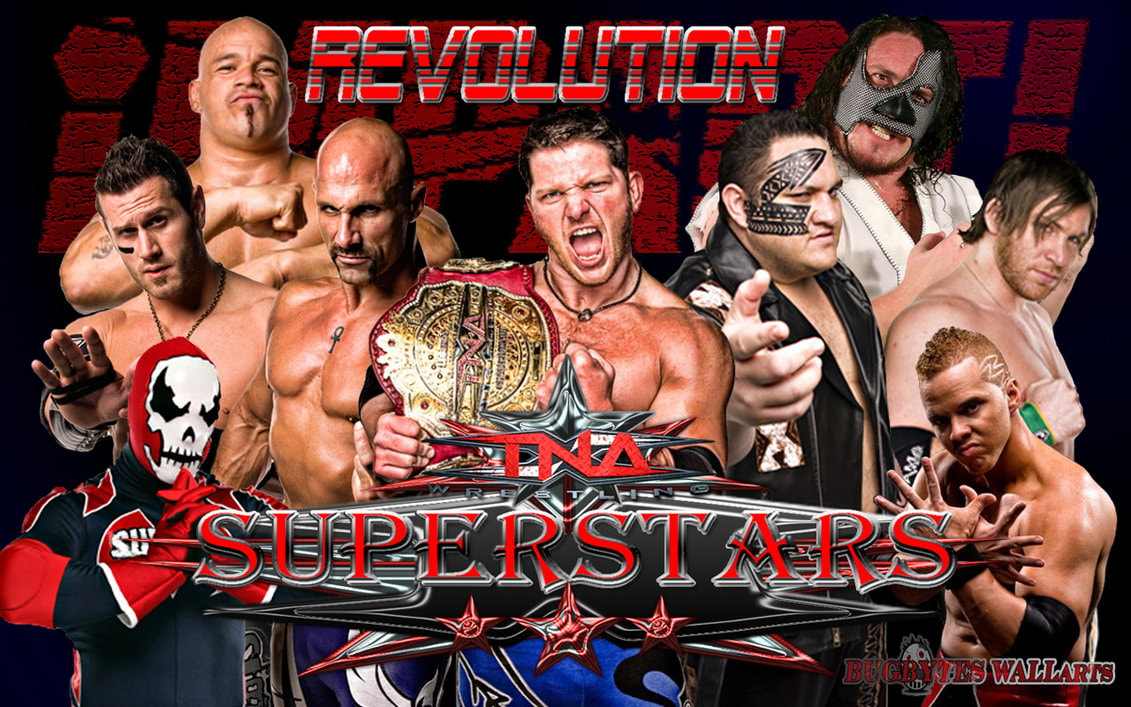 As we mentioned in our previous installment, The Rise and Fall of TNA: Vol. 4 - Dixie Buys TNA, a major step that needed to be taken for TNA to grow and be successful, was to get a TV network deal.

Up to this point, the company was relying on running weekly PPV's, which was a money losing business model. But for the company to make the jump to national TV, it would take a lot more money and a lot more risk.

But before we dive into the actual TV deal, a few things happened prior, which set the stage for the move.

First, with the influx of Panda Energy money, TNA started making a play for the biggest name in the history of pro wrestling, Hulk Hogan. Hogan was now out of the WWE but earlier that year, he was in a classic Wrestlemania match with the Rock, and regained the WWE title. So Jeff Jarrett began negotiations to bring Hogan in to TNA, for a huge Wrestlemania type show called Bound for Glory.

Now on the surface, of course this was a no brainier. You pay Hogan his money and the fan fare and exposure he will bring to the up start company will more than make up for and far exceed whatever you pay him. TNA needed a hook, and during that time, Hogan was the biggest hook possible, aside from Austin or Rock walking right off of WWE television.

But somehow the deal fell through. Some say it was because of teh relationship between TNA and Vince Russo. The hate Hogan has for Russo goes back to the dying days of WCW. Remember it was Russo and Jeff Jarrett who double crossed Hogan at Bash at the Beach 2000. If you don't remember that story, let me remind you.

Jarrett was WCW Champion.  There was heat on Hogan from the younger guys and his drawing power was dying. So Russo came up with a plan which he and Jarrett wanted to pull off as a “shoot”, that would not only get Hogan out of the company for awhile but also get Russo over with the younger guys who wanted Hogan gone.

The plan was for Russo to tell Jarrett to lay down for Hogan at the very beginning of their match.  Hogan, “irate”, would get the pin immediately, storm backstage, and “quit”.  The belt would go to Booker T later in the evening.  Then, months later when the heat subsided, Hogan would return, and since he still had “his” belt that he “won” from Jarrett, they could do a title vs. title unification match.

Allegedly, few knew what the real plan was, including Jarrett, who was convinced by his best friend Russo everything was legit. But that was complete bullshit and the plan backfired.

Russo ended up cutting a promo after the match where he said, among things, that Hogan didn’t give a shit about the company, was a goddamn politician, had used his creative control card to get his belt, and was bald.  He also promised, under threat of going to his grave, that nobody would ever see Hogan again. Hogan got so upset that he walked out for real and subsequently filed a defamation of character lawsuit.

So there was no surprise to many when Hogan refused to sign with TNA as long as Vince Russo was involved. The guy was a cancer and Jarrett just let him destroy everything. (More on that in future installments).

But Hogan did do one thing for Jarrett. At a New Japan Pro Wrestling show, which both competed on separately, Hogan shot an angle with Jarrett, where he allowed Jeff to knock him out with Jeff's signature guitar. This was seen by many as a clear sign that Hogan was coming to TNA.

But no, it was a one time deal. But the footage belonged to Jeff and he maximized. The image of Jeff hitting Hogan with that guitar was played everywhere, and for the first time, the TNA brand name was getting some huge attention. Just being associated with Hogan boosted the brands credibility.

All of a sudden, things started to pick up. TNA became a viable option. Kevin Nash, Scott Hall, Lex Luger, and Chyna all signed deals to come in for TNA shows. It was like all the cast offs were looking for a 2nd life in TNA.

Another change that became very evident was TNA's effort to tone down the product and present it more family friendly and less of Russo's shock TV format. Dixie Carter felt that the content of wrestling had gotten out of hand. In an effort to shock the viewer, story lines in the industry that were once considered obscene were now unfortunately common place.


Of course this all sounded like the right thing to say coming from someone who was concerned about the direction the business was going, but in truth, she didn't care about the product all that much. The reason they were toning down was because they were trying to sign a TV deal.


Behind the scenes, the company had been in negotiations with WGN and various TV networks about picking up a weekly TV show. The exposure and credibility Hogan gave them peaked the interest of networks, especially WGN. But when the Hogan deal fell through, so did the WGN deal. But the ball was rolling and Dixie and Jeff were determined to get a deal. So they invited multiple TV execs to the shows to give them a sample of the product. And of course the shows had to be tones down and TV ready.


Then came news that TNA was close to a deal with FOX Sports Net, the upstart cable sports channel under the FOX umbrella. But FOX had a few demands, one of which has affected TNA to this very day. FOX wanted TNA to separate itself from Ring of Honor Wrestling and have no relationship with them.


Up until this point, TNA and ROH were both Independent wrestling companies in different parts of the country trying to make money and not really hurting each others business. Routinely, talent would work for both companies. TNA approached several guys, including AJ Styles, Chris Sabin and Christopher Daniels, about no longer working for Ring of Honor.


At first, this sounds like another one of those petty indy war tactics by promoters who hadn't figured out that the territories were dead and it didn't hurt to work for another area promotion (and in this case, a promotion in another STATE). But this was different. Fox Sports specifically asked if TNA and ROH were working together, and when TNA said no, Fox asked why TNA guys were working for the other company then.


Instead of just explaining that ROH was another of a million indy groups around the country that some TNA wrestlers work for, Jeff Jarrett started confronting guys and asking them to distance themselves from ROH. He said he understood that working the ROH dates would help the guys both financially and as in-ring performers, but Comcast and Adelphia, the company’s PPV providers, were very sour on ROH due to the issue with one its co owner's Rob Feinstein.

If you don't know who he is, Feinstein was co founder of ROH who was accused of being involved in an underage sex sting operation. Feinstein attempted to pick up an individual who was passing himself off as a 14-year-old boy named Brandon (it was actually an adult representative of the website who goes under the handle "Jay Alternative"). Several days worth of disturbing IM chat transcripts and a phone conversation transcribed from memory were published on the site. Feinstein, identified both visually and by matching the license plates on the Lexus he fled to, was met at the house by NBC10 news cameras.


To say nobody wanted anything to do with ROH would be an understatement. Gabe Sapolsky of ROH flew to Nashville and met with the Jarretts. The gist of the meeting was that the TNA people wanted Sapolsky to sign a paper stating that Rob Feinstein had absolutely no involvement in the company whatsoever. ROH president and owner Doug Gentry signed the document Then TNA then said they wanted a signature from investor Cary Silkin. Silkin, however, refused to sign the document.


The issue was a clause which stated that the undersigned would be held personally financially responsible for any problems TNA would encounter should Feinstein ever become involved with TNA again. Silkin’s attorney told him he’d be an idiot to sign a document like that.

TNA wasn’t happy, which led many to speculate that FOX Sports Net probably didn't care that a few TNA workers are wrestling for another company that used to be run by a guy accused of trying to pick up a 14-year-old boy; instead, they just want to make sure they have exclusivity over all the talent, and this is a great way to ensure that.

So gone from Ring of Honor were  AJ Styles, Jerry Lynn, Raven, Christopher Daniels, Chris Sabin, Jack Evans, and CM Punk. All these performers were now exclusively under contract to TNA.


Shortly after that final hurdle was cleared, it was announced that TNA Impact, would air Friday afternoons at 3:00 PM, beginning June 4th 2004. But the big news was not the deal or the time slot, but that they were buying the programming slot from Fox Sports Net. Smh.


It had been said since day one that what TNA really needed was TV to survive. Realistically, though, that was looking at things very simplistically, because "TV" can mean many things.

WWE TV is pretty much a win-win situation for everyone involved. WWE is PAID a huge sum of money by USA for the programming. The programming airs at a very good time, which means lots of fans tune in. USA is happy because it gets good ratings and they can make lots of money off advertising. WWE then uses that TV to air compelling programming (bear with me) that attempts to convince fans to pay $9.99 per month to watch monthly major shows on the Network. The TV could also be used to convince fans to buy tickets to arena events.


The TNA Fox Sports model was going to be much different. TNA paid money for the time slots and hoped that they could sell enough advertising to make up for those costs. Since they were already losing tens of thousands of dollars per week with the Wednesday night $9.95 PPV model, if they were unable to sell enough ads, this would result in their money losses increasing rapidly, because no money would be coming in at all from a free TV show.


But no matter the obstacles, TNA needed to be on national TV, and they got there. The road wasn't smooth, more issues would soon come, but for now, their exposure was about to increase dramatically.

Join us next time as we take a look at the rise of the 6 sided ring era.