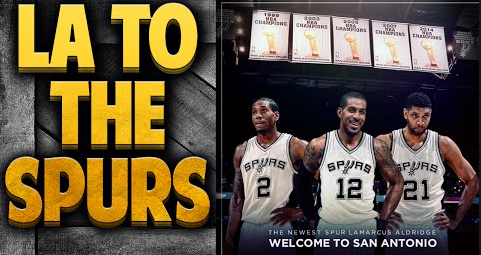 That's right, the you already know how I am feeling today. Happy Happy Happy.

My team, The San Antonio Spurs landed the free agent we all knew was teh biggest fish this off season, LaMarcus Aldridge (LA).

LA chose the Spurs over the Lakers, Knicks, Mavs, Suns, Raptors, and his former team the Blazers. LOL, would you?

In the end, Gregg Popovich's personal meetings with Aldridge along with his staff, and the chance at a legit opportunity to contend for a title in his home state of Texas lured Aldridge to San Antonio for four-years, worth $80 million.

The addition of LaMarcus Aldridge means that Tim Duncan and coach Gregg Popovich can continue on for a few more years with top talent on board. In a league that keeps evolving and getting better, usually the team at the top has to slide off and then find a new way back. (See: Lakers, Los Angeles.) With this move, the Spurs can contend for not just however long Duncan plays, but beyond. The Spurs will have All-Star power forward Aldridge and Kawhi Leonard together for at least four years.

Popovich will reportedly coach out the remainder of his five-year contract, so they have that stability. They have Danny Green on a long-term deal, and Tony Parker won't be going anywhere either. San Antonio has a pipeline to good talent through the D-League and international scouting and a great player development system to build them into role players. With the cap expanding, they'll have room to work in the coming years, too.

Let's be 100 percent clear on this: The Spurs are staying in the title window for the foreseeable future.

Aldridge does have a skill set that's tailor-made for the Spurs, though. He moves well without the ball, he's a skilled passer, and he's very smart. He can be a ball-stopper on occasion, but it's not at all difficult to envision him moving the ball more quickly in San Antonio than he did in Portland. Good habits rub off well on others when you come to San Antonio.

Aldridge will slot into San Antonio's starting lineup at his normal power forward spot, taking Splitter's place while bumping Tim Duncan back to the center position.

The Spurs probably won't pound the ball down into the post quite as often as the Blazers did, but they're sure to take advantage of the fact Aldridge is able to score down there at an efficient clip.

Duncan and Aldridge can play together extremely well, though. There's no redundancy in how they play their respective positions. Each is able to stretch the floor to 18 feet, both can rebound, both can post up and score. Beyond all that, he's an incredibly intelligent player and those guys do well in the Spurs' system. Aldridge clearly "gets it" as far as the Spurs go, or they wouldn't have been interested and he wouldn't have signed. Duncan will make Aldridge better; that's what he does with players next to him. He will have to cover for some of Aldridge's shortcomings.

Still, it also means that opponents can't leave Aldridge to double Duncan like they could have with Splitter or Baynes, and that's going to mean easier scoring opportunities one-on-one for Duncan.

You can bet that Popovich's pull wasn't just him hitting the table with his five rings like other big-name coach-execs would. It was about culture and basketball, things that resonated with Aldridge in a way that the lure of big-market campaigns and historical greatness never could. When Pop wants something, he gets it. That's power. 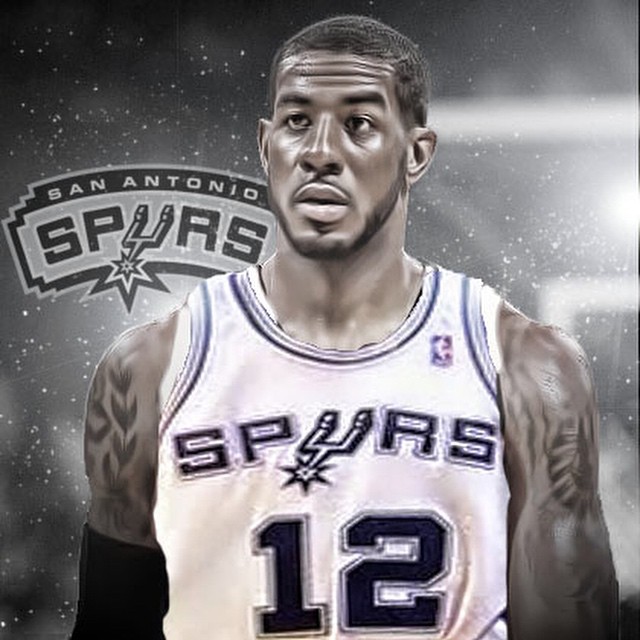