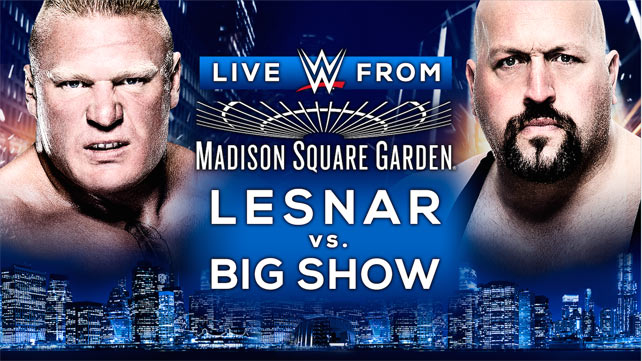 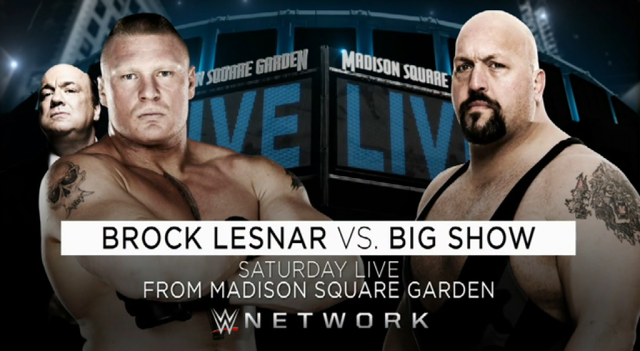 Brock Lesnar vs. Big Show
​Big Show started off strong and dominated the match early. He back body dropped Lesnar to the floor. When he came back, couldn't outpower the Big Show and Show continued to dominate, laying him out with three chokeslams for the nearfall. Lesnar came back and gave him German suplexes but couldn't get him up for the F5 in what looked like a botch. He hit one more German then pinned Show with the F5. Fun for what it was.

After the announcers plugged that Lesnar would be on Raw, he walked back to the ring where Show gave him the up yours gesture. In response, Lesnar gave him a belly to belly and another F5. They showed Show struggling to get up and get out of the ring. 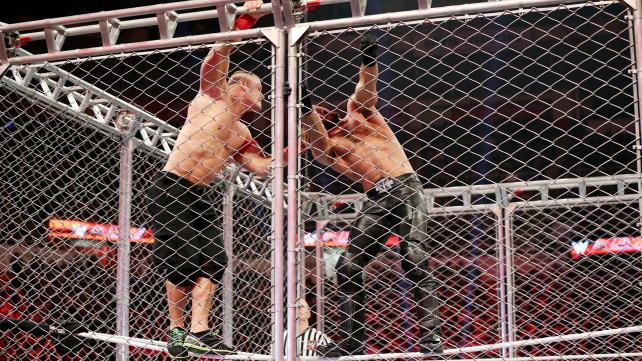 Steel Cage US Title Match: Seth Rollins vs. John Cena
They teased a spot earl where Rollins climbed over the top but Cena was crawling through the door and grabbed him before he could exit. Mostly some really good back and forth for a lot of the match. Cena started doing his comeback spots but Rollins cut him off with a kick to the shoulder. Rollins taunted him by doing his "You can't see me" gesture but Cena kicked him in the face, did his comeback and went for the AA but Rollins climbed on the cage. He jumped off but Cena grabbed his ankle and hit the STF. Cena was going to escape through the door but Rollins slammed the door on his head.

Rollins went for the pedigree but Cena countered, throwing off Rollins but Rollins ended up climbing the cage again. After throwing off Rollins, Rollins came back and gave Cena the superplex into another suplex spot. Seth climbed to the top but Cena dragged him back to the cage and hit a tornado DDT. Cena went to escape again but Seth climbed on top of the cage and hit Cena with the door. He started to climb over but Cena's miraculous healing powers kicked in, immediately got up and stopped him.

​Rollins finally laid him out and was climbing the cage when, as expected, Demon Kane came out and stood where Seth was going to climb off. Seth went for a frog splash instead but Cena dodged it, got up and hit the AA to retain the title. Easily the best match of the show, wouldn't say it was as great as other matches they've had over the summer but this was a really good steel cage match. 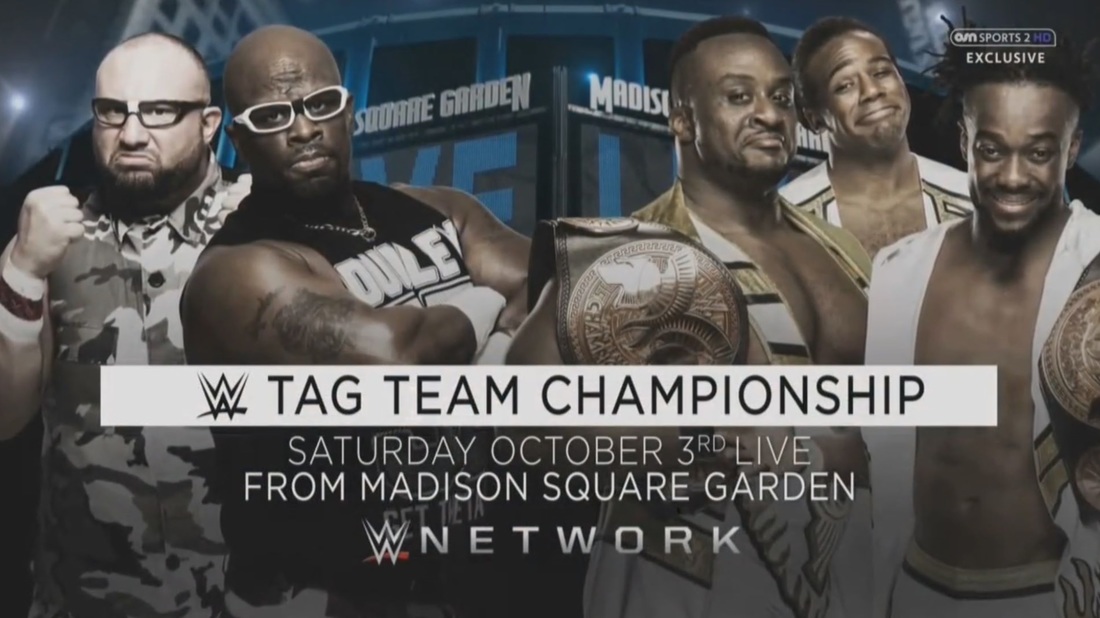 WWE Tag Team Title Match: New Day vs. The Dudley Boyz
​The New Day came out an cut a promo about the Dudleyz, mentioning how they wear glasses without lenses and shamed them for putting Xavier through a table. Today, the New Day will save the tables. Dudleyz came out but didn't get that big of a pop. Mostly back and forth until the Dudleyz were going for the wuzzup spot and Xavier shoved D-Von off, allowing them to get the heat on Bubba. He made the hot tag to D-Von as he made a comeback. Kofi was going for a springboard but instead was cut off and given the 3D for what looked to be the win, but then Xavier just ran in and broke it up for the DQ. Hideously lame finish to an otherwise good match.

The New Day set up a table like they were going to put D-Von through a table, but Bubba Ray came back and threw them out of the ring. Xavier was on the top rope celebrating and didn't see this, so when he jumped off and turned around he, in fact, got a 3D through the table.

​Jericho talked before the match mentioning how today marked 25 years in the business and how he wrestled in a ten minute draw with Lance Storm in his first match. Jericho mentioned Storm was here and he waved to the audience, as well as Don Callis who was also in attendance. Jericho also mentioned watching his father here play for the New York Rangers, then said win or lose he'll celebrate with the Jerichoholics after the match.
WWE IC Title Match: Kevin Owens vs. Chris Jericho
​This was good, but it felt like they were doing a 6-8 minute version of a 20 minute match as they were going for big moves and finishes very early. Owens went for a senton but Jericho got the knees up. He goes for the walls of Jericho but Owens escapes. Jericho hits the codebreaker but Owens grabs the ropes. The referee grabbed Jericho back which allowed Owens to hit a superkick. He went for the pop up powerbomb but Jericho turned it into a hurricanrana. Owens poked him in the eye when Jericho went to grab him and rolled him up to retain the title. This was good while it lasted, but felt way too short and rushed. 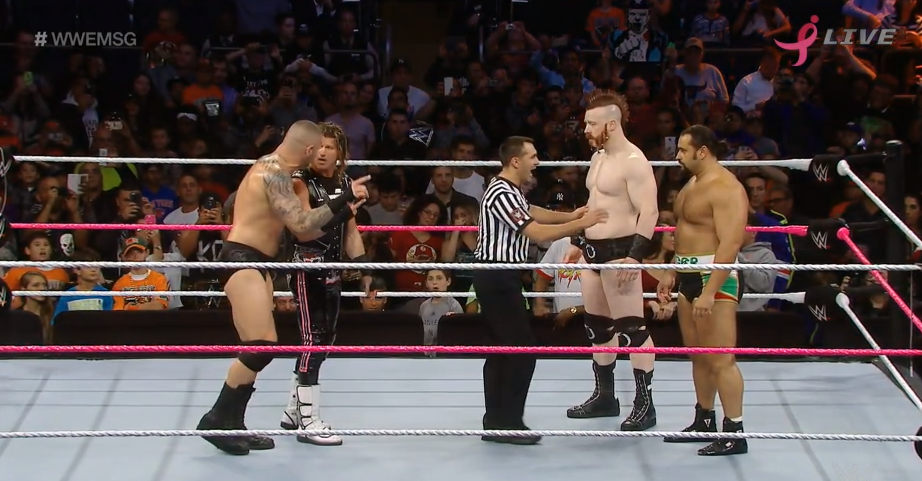 Sheamus & Rusev vs. Dolph Ziggler & Randy Orton
​Sheamus/Orton and Ziggler/Rusev were both promoted as singles bouts previously. I guess this is another one in the plans change department. Ziggler was worked on for a lot of the match. Orton made the hot tag but Sheamus took him down quickly. Ziggler came back with a superkick and Sheamus walked right into an RKO, giving Orton the win. Pretty good, basic opening bout.

Rusev got a mic and called Sheamus a stupid non-American and blamed him for the loss. Called him useless. He shoved him out of the ring and started to cut a promo on Lana when Sheamus came back and gave him a brouge kick. Sheamus got a mic and told him to kiss his arse.