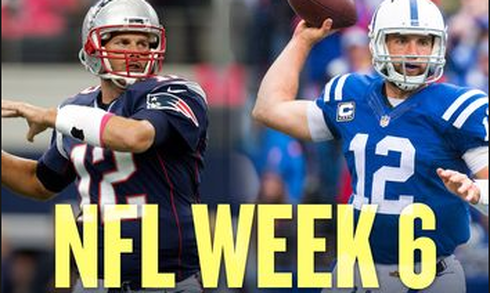 ​Check out my thought's on some of the main headlines from around the league on Sunday. Another crazy day, with injuries, upsets, and no shows.

Like many, I think the Bengals have the best roster, top to bottom, in the league. And this year, they are playing like it. I give credit to Marvin Lewis, Hue Jackson, and all 3 units for playing up to their potential through 6 weeks. They beat the Bills in a tough environment and looked going doing so.

The Lions finally got a W, and their leader, Matthew Stafford put the team on his back and led them to victory. I give him credit. We week after throwing 3 picks and being benched, Stafford and Calvin Johnson found their rhythm against a solid Bears team, and willed their team to a tough victory in overtime.

Of course, I picked the Lions to go to the Playoffs in the preseason and that looks foolish now, but I still think they the talent to play spoiler.

Cam leads Panthers to a win in Seattle

Cam Newton is a legitimate MVP candidate, no doubt about it, and win in Seattle helped that cause yesterday. Seattle isn't as good as their aura and hype, but that home field advantage is legit and the Panthers walking out with a comeback victory was a statement win. Good stuff.

It wasn't easy, but the Packers out gunned the San Diego Chargers, to remain undefeated. Aaron Rodgers used all his weapons to pull out the victory, despite his defense giving up 500 passing yards to Phillip Rivers. Rivers was sensational. Hell of a game.

Broncos escape the Dog Pound with a W

Peyton Manning is struggling. He looks nothing like the Peyton we are accustomed to seeing. Its so weird seeing him throw this many interceptions. But the Broncos are still undefeated. Much of the credit must go to that defense who was playing without Demarcus Ware. Aqib Taleb is my leading candidate for defensive player of the year.

The Browns fought hard and must be given credit for pushing the Broncos to the limit. McCown threw a bad interception in overtime and that was the difference in the game. But good win for the Broncos.

Steelers get a big win

Landry Jones came in for an injured Michael Vick and pulled off a great win at home over a very good Arizona Cardinals team. Jones looked like a real QB, and delivered the ball well. He hit Martavious Bryant with 2 big play touchdowns that put the game away.

The Steelers have great weapons on offense and I think Jones should be the starter next week. Vick was horrible before he left due to injury. He just is too inconsistent to be a starting QB at this point, especially in this system. Good win for the Steelers and they are hanging around waiting for Ben's return.

I have never seen a dumber play call than what I witnessed on last night. With the game close and the defense hanging in there against the explosive Patriot offense, the Colts dialed up, what was supposed to be a fake punt, i guess, but it looked like utter shit and was blown up immediately.

I have no damn clue what they were thinking and Chuck Pagano should be fined and suspended by his owner after that dumb shit. Smh. Brady was efficient, the Pats rolled and remain undefeated. the outcome was never really in question though. It just pisses me off when teams do dumb stuff.