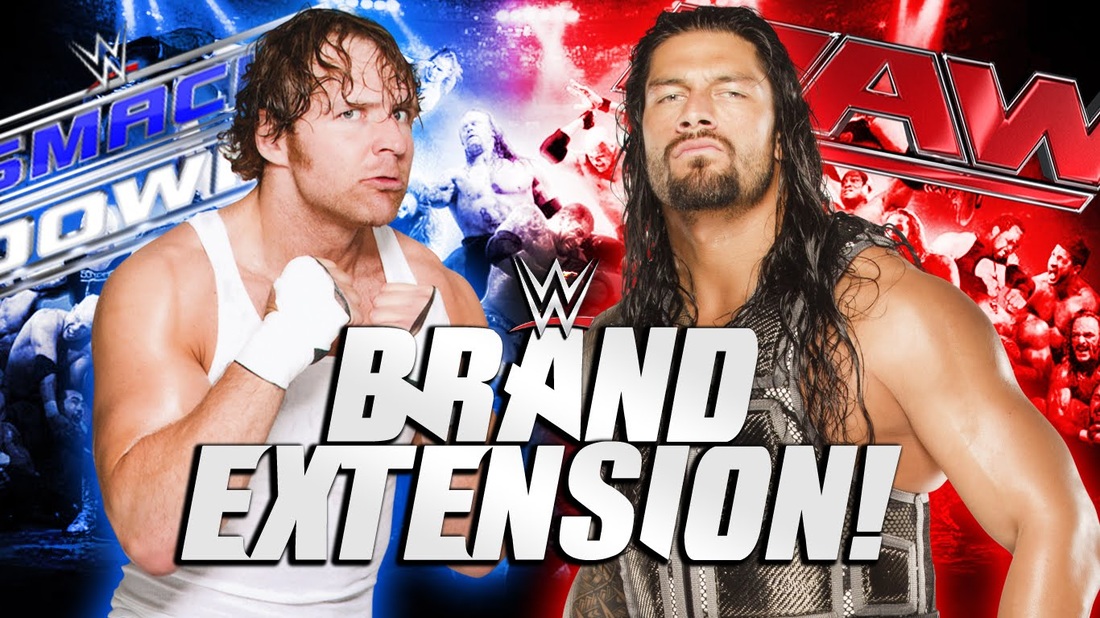 Well after months of speculation on what the company would do to showcase the deepest roster they have had in years, the WWE announced that they will be split the roster over two brands and moving Smackdown live on the USA Network on Tuesday nights at 8 p.m. Eastern time.

​The new format begins on 7/19. The move will go back to the brand split of 2002 to 2011, where there were separate Raw and Smackdown rosters. From 2003 to early 2007, there were also separate PPVs. During that era, the major PPVs would be joint shows combining the stars from both brands, while the “B” shows became even more “B” oriented as they would alternate between Raw brand and Smackdown brand shows. During this period, PPV numbers for the “B” shows fell and thus after WrestleMania 23, the move was to put them together.

I for one thought the brand split was a great idea in theory originally, but it was poor executed over the long haul. The problem was, RAW was treated as the A show and Smackdown the B show, and fans were conditioned to view the shows and rosters that way over time.

The only news is that as of right now, the plan is to create two world championships, one for each brand, and that the IC and U.S. belts will be obviously split up between the brands. But even the one vs. two world titles, while being leaned toward right now, is not a lock. The tentative plan is for the women’s champion, Charlotte, to appear on both brands as champion and she would be the only person, with the exception of Roman Reigns or whoever the singles champion is.

One of the first moves of the original brand split was to create a second world title. Brock Lesnar was the WWE champion at the time of the split, and he was moved to the Smackdown brand. Eric Bischoff created the “World heavyweight title,” and HHH was made the first champion. A few years later they switched with the “world champion” (Dave Bautista) moved to Smackdown and the WWE champion (John Cena) moved to Raw.

This was the ultimate mistake in my opinion. The RAW champion was seen as the real champion and Smackdown champion was treated like nothing. It didn't help that guys like JBL, Mark Henry, and Jack Swagger had title runs. Don't get me wrong, if those guys were built up and given quality wins over top guys to win the title, they would have been see as legit champions. But instead they were beating lesser guys, on the lesser brand, while the real champion was on RAW.

In Wednesday's Variety article, which broke the news, the key announcement was that Raw and Smackdown would have separate rosters and completely different storylines. While the writing crew has been separated to a degree with a Raw and Smackdown crew, they obviously have always worked together since they are doing the same storylines. With the move, the writing teams will be split and there will be internal competition.

​The belief is that one show will feature Stephanie McMahon in charge and the other show will feature Shane McMahon in charge. While Vince McMahon and Paul Levesque will continue to run creative, the belief is that Ed Koskey and Ryan Ward, as head writers of Raw and Smackdown, will each end up with more power since the staffs will have more control and not have to work together on ideas. It appears that both McMahons will play babyface authority figure roles, at least at first, and the idea is that there will be television competition between the two of them. Behind the scenes, there very much will be competition pushed by Vince McMahon on the two writing teams.

The other belief is that John Cena will be the main star on one show and Roman Reigns on the other and because Brock Lesnar’s dates are worked out so far in advance that he would be on the Raw crew when he returns in August. But we’re told even Lesnar being on Raw is not a certainty.

As things stand, the belief is there will be a draft show on 7/11 in Detroit. Talent will not be told (aside from perhaps a few key people) which show they will be on until that night. For the most part, talent is right now completely in the dark regarding what is happening, and most of the key decisions are leaning in directions but none are solidified.

When it comes to booking, nothing is confirmed as far as the obvious questions. WWE has officially said that all the obvious questions will be answered over the next few weeks. The word is that Vince McMahon is really pumped about the new possibilities. Of course, Vince’s nature is to get pumped up by new challenges and usually about a month in, if they don’t click immediately, he loses interest and things end up reverting back to how they were.

​The key is balancing the talent, but having the McMahon stamp on both shows. On the flip side, while there is talk of Smackdown being more wrestling oriented (and no matter what you hear, nothing is definite on anything), it would likely mean with the live show that Vince McMahon would take a greater interest in the show.

One aspect is that when it comes to actual roster talent, if you include the NXT guys who are ready and the full rosters now, there is a ton of talent. Of course, from a talent standpoint, it’s not even close to the talent WCW had in the late 90s. Talent alone doesn’t guarantee success if you don’t have the creative that connects with the fans. But things look strong with the returns of Cena, Rollins, Randy Orton, Neville and Bray Wyatt combined with the existing talent and the talent ready for the main roster right now in NXT. But that isn’t taking into account that there will be constant injuries to top talent. With Raw not having to not have half the top talent inherently, a Cena or Reigns injury becomes an even stronger negative because you don’t have the other around to build around.

As far as tag team titles and the women, that is fluid. In the past they had two women’s titles and two sets of tag team champions, but in doing so, it devalued the titles. If you throw in NXT, that would be three different sets of belts and inherently devalue them.

Even the world titles themselves seemed to mean less, because the feeling during that period was WWE had “two IC champions” instead of two world champions. Even the roster situation is not certain, as some are campaigning for a hard split of rosters, while others want a soft split, with key stars making guest appearances on the other shows and allowing for more unique top matches on television or PPV.

There was at least talk of two tag team titles exclusive to shows, or tag team champions that would work both shows. There was also talk of women exclusive to one show. But women’s matches have been a staple to the house show programs, so it’s either two women’s titles, a champion who appears on both shows, or something unique, which would be one show featuring the women’s champion and the other featuring women’s tag team champions. But with the small number of women on the roster, having women and women’s tag team champions limited to one brand will create stale matchups very quickly.

The weakness of the split is that there are less players to play with on each side, although that can be rectified because there is a lot of talent in NXT that is main roster worthy and talent in places like New Japan, TNA and ROH that can be used to add depth. The plan is for more aggressively going after wrestlers. The one thing that kept some top talent in other groups without WWE aggressively going after them, the size and look issue that WWE long had, is still important. But it’s far less important than ever before given the type of talent that has gotten over in recent years. In particular, they are not only going to need anyone who can be a top guy on the main roster, meaning the key NXT talent that is ready should be brought up at that time, but they also have to do a balancing act to not kill off that brand.

NXT shows vary from 100 to 400 without strong full cards to 1,000 to 3,000 when you have shows that include Shinsuke Nakamura, Samoa Joe, Bayley, Austin Aries, Finn Balor, Jason Jordan and Chad Gable all together. This also could lead to Bobby Roode and/or Eric Young debuting on the main roster instead of NXT. Bringing some of them up is a necessity, but bringing all of them up will kill NXT touring. The other byproduct of this is WWE, with three separate rosters to tour with, will be almost have to be more extensively going after the best talent in companies like New Japan, CMLL, AAA, ROH, Lucha Underground and TNA.

When you include DVR viewership, the USA Network is listing 4,011,000 viewers as the average for Raw so far this year and 2,674,000 viewers for Smackdown, and claims it makes USA No. 1 in entertainment programming on cable every Monday and Thursday.

The theory for Smackdown is that going live will help, although historically that has in the past proven to be overrated. But what they are counting on is that there will be half the major stars that will only be seen on Smackdown, so if fans want to see them, they’ll have to watch on Tuesdays. Even though Smackdown is usually better than Raw, largely because of two hours vs. three hours and the better announcing crew, for a casual fan it is a totally skippable show.

From a talent standpoint, there are those who have preferences, but the decisions are out of their hands. The feeling is that Raw will always be the “A” show, and was during the last brand extension, so there will be more money appearing on those house shows and more people watching you. Others feel Smackdown will be a better place because on that show there will be more opportunities for upward mobility.

In addition, the reason the brand extension was chipped away with, and eventually dumped, was because of continual declines in ratings because the key stars were only on half the shows. Vince McMahon’s original mentality in 2001 when he had the influx of talent due to the end of WCW and ECW was that it was beneficial for main talent to only appear on one television show per week, feeling two shows burned them out faster. But in practice, as time went on, he changed his view, as the feeling was the individual shows lacked the talent depth.

But in recent years, with the rise of independent wrestling and higher level of that type of talent due to working at a high level more, there are more quality wrestlers around that at any time in a long time. Plus, there is more of an acceptance of international stars because of how well wrestlers from Japan and the U.K. have gotten over in the U.S. in recent years on indies, ROH and NXT.

Next week will will break down the roster and give our opinion on how this whole thing should be booked and structured. This is going be a crazy ride.