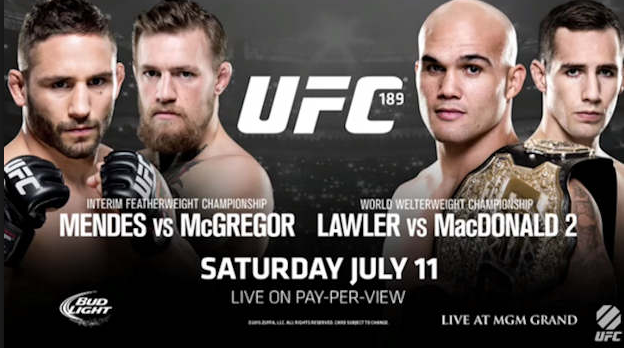 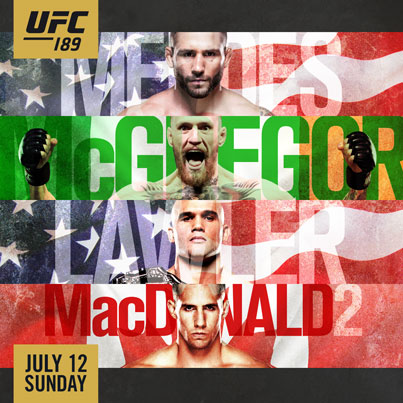 International Fight Week was originally scheduled to be headlined by Jose Aldo defending the UFC Featherweight Championship against Conor McGregor. However, Aldo suffered a rib injury and Chad Mendes was named as a potential replacement in the event Aldo was forced out.

Aldo was officially announced as out of the bout on June 30, and Mendes stepped in and now will fight McGregor for the Interim UFC Featherweight Championship due to it being the fifth scheduled title fight that Aldo has pulled out of. 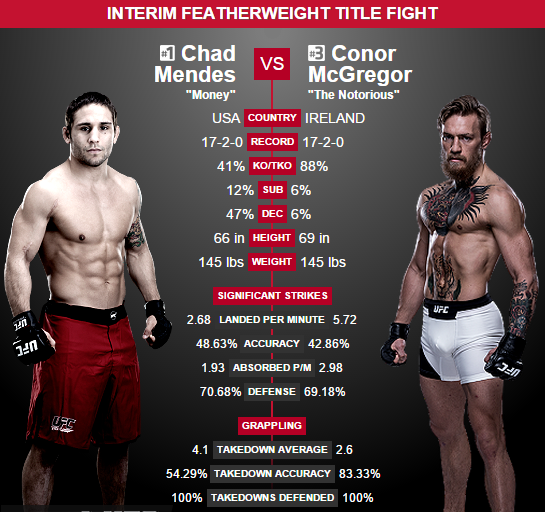 Conor McGregor is looking to extend his 13-fight win streak. He is coming off a second-round TKO win over Dennis Siver at UFC Fight Night 59 in January. He is 5-0 in his last five fights.

Chad Mendes is looking to score his second straight win. He is coming off a first-round TKO win over Ricardo Lamas at UFC Fight Night 63 in April. He is 4-1 in his last five fights.

UFC 189 has become The Conor McGregor Show and this event rests solely on his shoulders. There is a $7 million gate. There are big expectations for solid pay-per-view numbers. He has the country of Ireland coming over to support him, and this is the chance to truly establish himself as one of the top draws in the company. The biggest question is whether he can come out on top in the end against a tough opponent in Chad Mendes.

Mendes brings a different fight to McGregor than Aldo would have. Aldo is more dangerous and technical on his feet. Mendes is arguably the best wrestler in the featherweight division, and that is the biggest area that McGregor has yet to be tested in.

Mendes is coming into a five-round fight on 17 days' notice, though he didn't officially get the fight until 12 days before the Saturday event. He always trains hard and he does have a good gas tank, but going 25 minutes with that short of notice is a lot to ask for, though his last two fights have all been scheduled for five rounds.

McGregor has ben training for months for a five-round title fight, and he will be in excellent shape. Both are going to be drained from big weight cuts, and that will play a factor in the later rounds. McGregor having more preparation time will make the difference there. I think this fight is a lot closer than people realize. 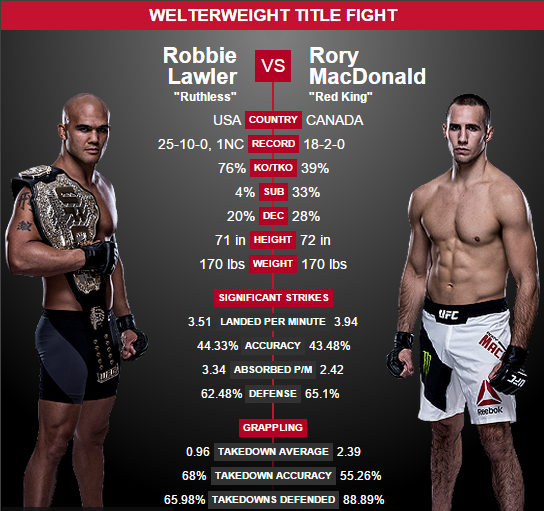 Robbie Lawler is looking to extend his 3-fight win streak. He is coming off a split decision win over Johny Hendricks at UFC 181 in December to win the UFC Welterweight Championship. He is 4-1 in his last five fights.

Rory MacDonald is looking to extend his 3-fight win streak. He is coming off a third-round TKO win over Tarec Saffiedine at UFC Fight Night 54 in October. He is 4-1 in his last five fights.

They fought at UFC 167 in November 2013, a bout won by Lawler by split decision. It came down to the final round, and Lawler was able to knock MacDonald down, and that made the difference.

MacDonald has recently claimed that he was injured and wasn't mentally focused going into the first bout with Lawler. How much of that is the truth and how much of that isn't and is just a tactic to dismiss the outcome of the first time is a question that MacDonald will need to answer. MacDonald looked fantastic in his win over Tarec Saffiedine in October.

Lawler has looked fantastic in his three recent wins, with a dominant finish of Jake Ellenberger, a dominant 25-minute win over Matt Brown, and a close fight with former champion Johny Hendricks, but Lawler made it count late when it mattered, coming on strong in the closing rounds to earn the championship that was put around his waist.

MacDonald needs to be mentally ready for a 25-minute battle. He has been working hard to get the championship bout, and this is his first crack at it. Will he be mentally strong enough? His prior two opportunities to really break out resulted in losses- to Lawler and Carlos Condit. This is a different chance to break out- he has a championship he can win. Lawler has been around the block and his comeback has been one of the best stories in the history of the sport.