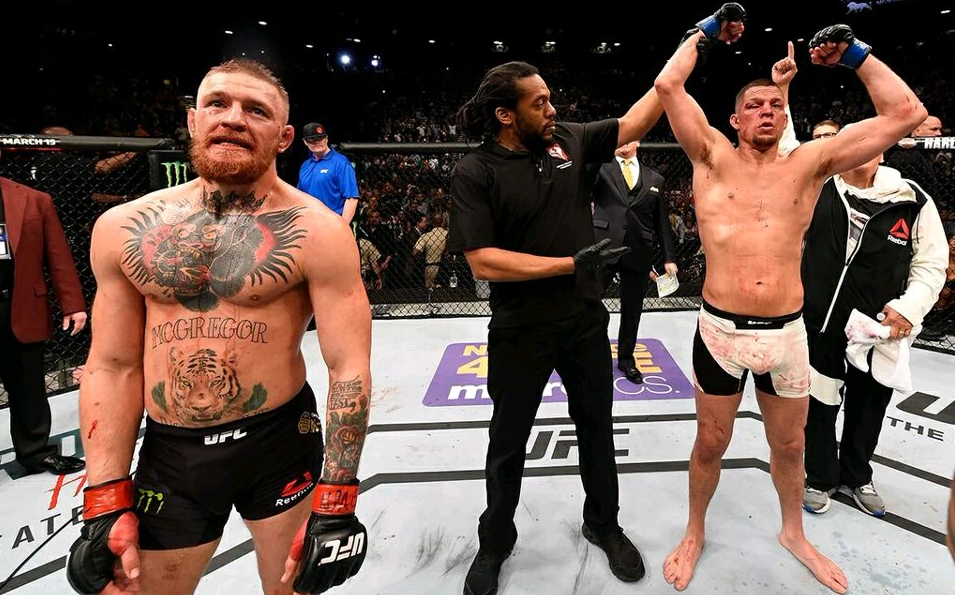 What's Next for Conor? 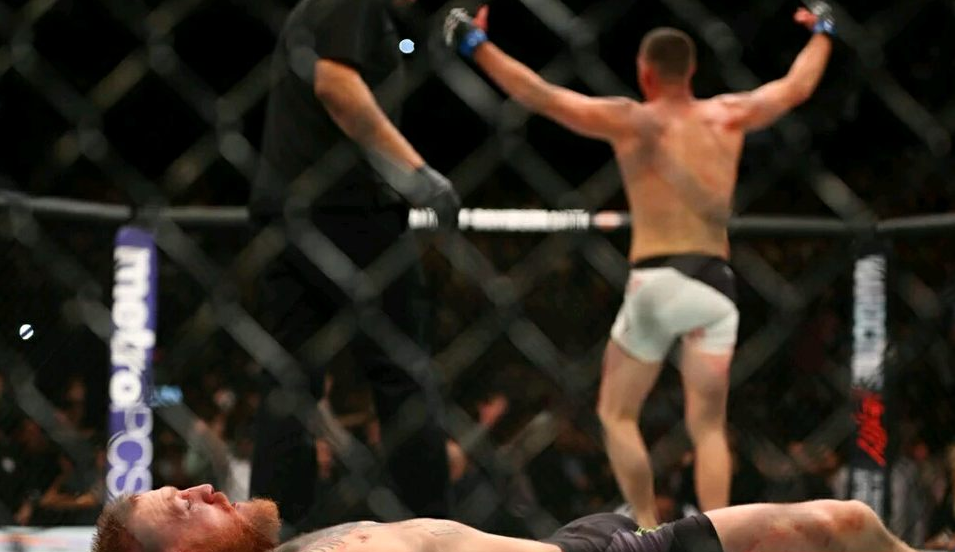 ​On Saturday night, the entire MMA viewing public was shocked to see the Nortorious, Conor McGregor, tap out to the rear nake choke of Nate Diaz. If you didn't see it, here is a glimspe.
McGregor has risen to stardom faster than any other star in UFC history, more so for his charisma and talking ability. But what has made Conor so great and skyrocketed him to an elite level star in UFC, is the fact that until Saturday, he has been able to back it up.

Well, I truly believe Conor bit off more than he could chew by moving up in weight from 145 to 170 in such a short period of time. Clearly, hitting bigger men with those same moves that would knock out 145 pounders, was not effective, and Nate Diaz was able to walk through many of McGregor's power punches. But under the circumstances, Conor has to be commended for taking the fight at 170, when it was only called to do so after an injury to Rafael Dos Anjos, and nobody else stepping up to take the fight at 145 or 155.

But the reality is, Conor McGregor losing on Saturday night did cost the UFC alot of money and it hurt the Conor brand. Anytime someone who has built their persona and popularity off of being able to tell people how much he is than them, and then going out to back it, loses, his reputation will clearly take a hit.

After the fight, many of his contemporaries took to social media to mock McGregor and laugh at his pain. Something that should be expected to come with the territory when your so defamatory in your comments towards others when you are winning or working to hype up yourself. Jon Jones and Demetrius Johnson took issue with Conor saying he was the pound for pound best and saying he was better than all the rest. Well... 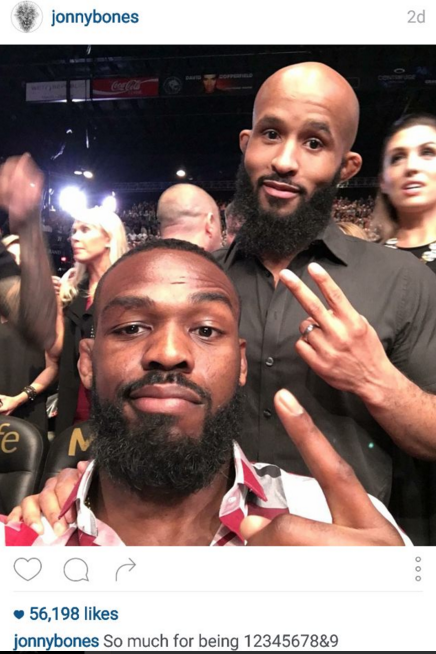 ​But the real problem for McGregor is now he has no leverage to pick whatever fight he wants, in any weight division, which is seemingly what the UFC was willing to concede before Saturday night. I mean, we heard so many fights thrown out there as possibilities for UFC 200. From McGregor vs George St. Pierre, to him moving up to take on Robbie Lawler for the Welterweight title.

But now, that noise has been silenced, and nobody is more happy than Jose Aldo, who feels he should have been given an immediate rematch for the 145 title Conor defeated him for in December. Aldo took to social media on Saturday night after the fight. 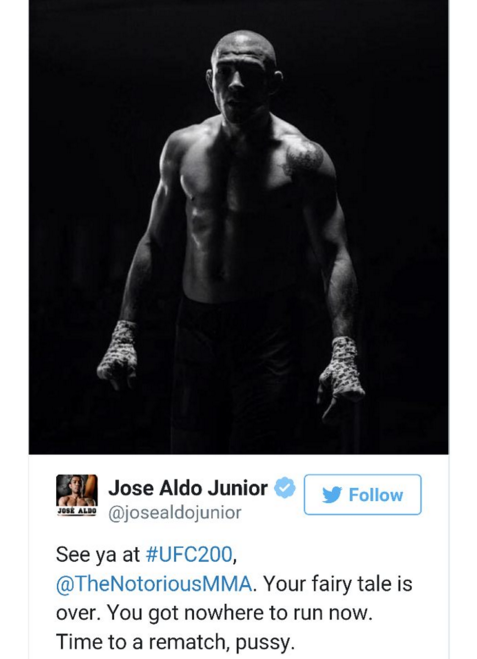 Clearly Conor was pissed off when he heard about Aldo's post on social media and he even mentioned it in his post fight press conference.
​Conor took to Social media on Sunday to express his feelings in detail towards Aldo, and even threw a shot at Raphael Dos Anjos in the process. 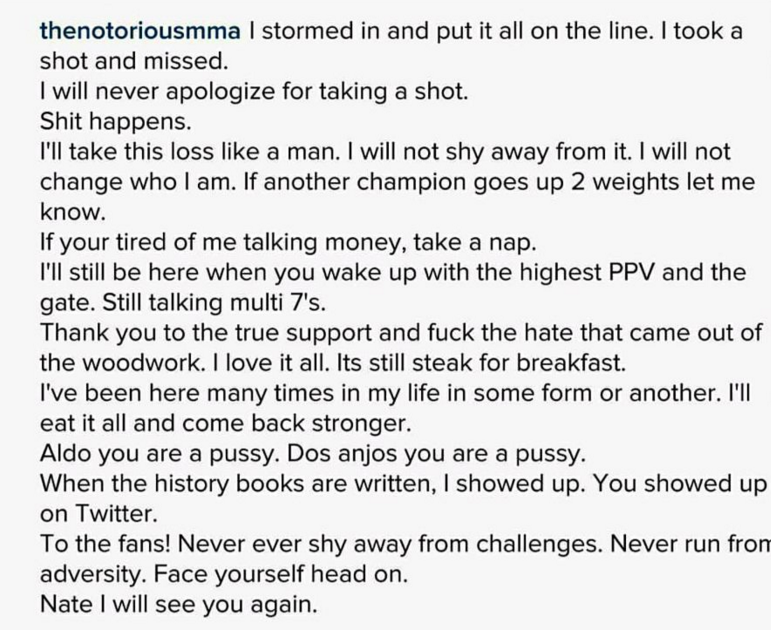 Well Dos Anjos didn't appreciate that shot given that a broken foot caused him to have to pull out, and he responded on Monday to the comments by McGregor.

"Honestly, to tell you the truth, I thought [McGregor] would win," dos Anjos admitted Monday on The MMA Hour. "He did his best because he had a lot of guys offer to fight him; Anthony Pettis, Donald Cerrone, guys in shape, guys in fight camps. So he picked Nate Diaz, who wasn't training for sure. Like [Diaz] said, he didn't spar once for this fight. And he submitted him. So [McGregor] picked the easiest one on his mind, that's why I thought he was going to win.

"But Nate Diaz is a tough opponent. I've fought him. He's a really hard guy to finish, has a lot of heart, but he's different than Conor. Conor did not show a lot of heart. He's a lion when he's punching somebody, but when he's getting punched, he becomes a cat. A little cat. When he's punching somebody, he's a lion. But when people punch him, he becomes a cat."

"For me, I don't care [about] anybody's loss," dos Anjos said. "I think it's a loser's mentality to get happy with somebody losing. I don't think like that, because one day I'm going to be there, on the Octagon, stepping there. So I don't want anybody cheering for me to lose. I don't want to be in that position. But I think everybody got what they deserve. Conor got what he deserved, and God makes everything perfect. Conor, he claimed to be God, and God made everything perfect. God showed him, the world, who he really is."

"This guy, I think, everything he talked, he paid in the Octagon," dos Anjos said. "He just got exposed, and everything he talked, when the Octagon locked, everybody saw the truth. I think everybody saw the truth last Saturday and he got submitted. Even Holly Holm, she went to sleep without tapping. He tapped. Bro, how are you going to tap on the neck, on the choke? Go to sleep, man. Be a man. Holly Holm showed more heart than him.

"A lot of people say, ‘ah, Conor went up two weight divisions.' No. Nate Diaz, he's a 155-pound fighter. He's a lightweight," dos Anjos added. "And [McGregor] is saying that, ‘I went up two weight divisions.' No, he did not fight Robbie Lawler. He did not fight Johny Hendricks. He fought Nate Diaz, which is 155. ... I just think Conor doesn't deserve to fight for this, for the 155 belt. He just got smashed by the No. 5 ranked (fighter)."

​Clearly Dos Anjos feels Conor deserves nothing from him. Check out teh comments that pissed him off.
Clearly Conor was none too happy, but he has to take his medicine. He has his money, but has lost alot of his leverage. What real reason, aside from the enormous paycheck, which should be reason enough, would any champion outside of the featherweight division have for needing to grant McGregor a title fight? The footage of him getting pounded and tapping will forever be used as ammo against him. He took a hit.

So what's next? There are two clear contenders in the featherweight division that would be ready made opponents for McGregor. 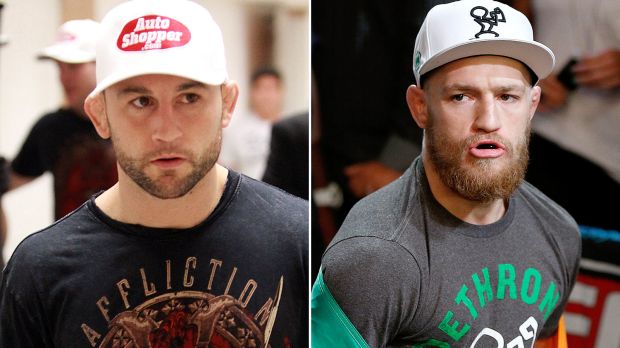 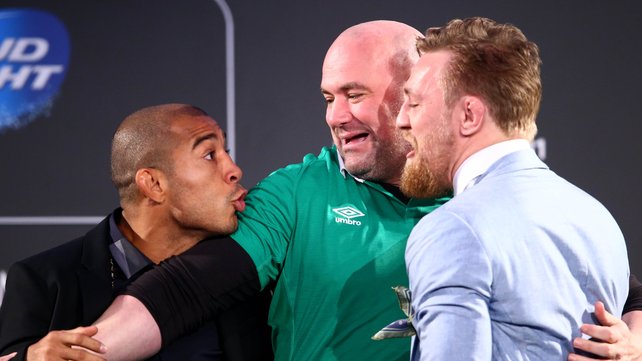 Edgar was on FOX Sports 1 post game show lobbying hard for the shot at Conor at UFC 200. He feels he's the most deserving contender who has not had a chance at McGregor and the gold. He said so on Instagram. 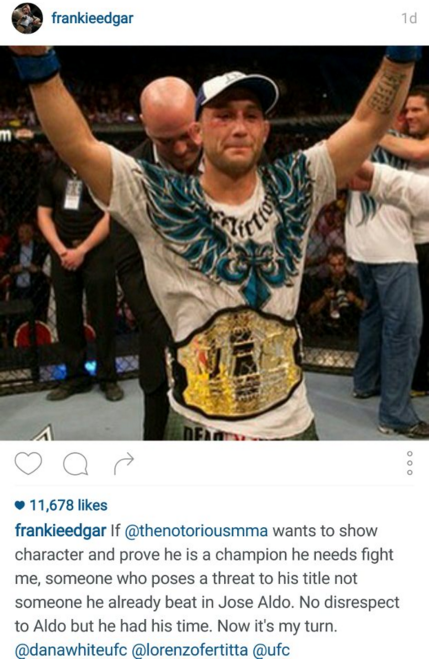 Well of course Jose Aldo took issue with that and wrote a long post in his native tongue and English on Instagram, stating why he is more deserving of a rematch. 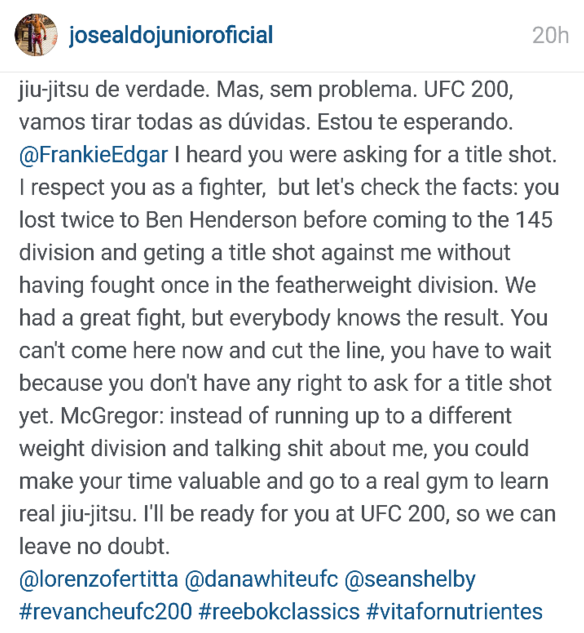 Conor spoke on who would be his next opponent in the post fight press conference.
Business wise, Dana White has to be furious. In all seriousness, his cash cow took shot after shot to the head and then was tapped out. This is the man who they are counting on to headline the biggest show of all time UFC 200, in less than four months. But physically, is that the right thing for Conor to come back so quickly. Had he won quickly and convincingly and taken no damage, I would be all for it, but the fact is, he was hurt pretty bad with some big shots from the bigger Nate Diaz. How great of state will he be in jumping back in there so quickly?

But if that is the route they are going, I feel nobody deserves the fight more than Jose Aldo. The man lost his title in 13 seconds on a punch that one might call a fluke. After being undefeated for ten years, I think Aldo deserves a chance to regain his crown. We have seen Edgar before, he's had plenty of chances in his career. H won't help build the fight up and he won't mix it up with Conor. With Aldo, there is real intense disdain for one another and the backstory is easy to understand and hype up. That's the way they should go.

Either way, in many ways, McGregor losing on Saturday was like money burning. Every fighter now has extra ammo to take shots at the Notorious one.