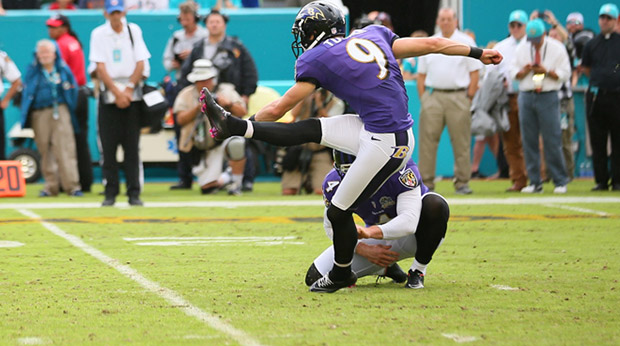 The Baltimore Ravens traveled to Miami on Sunday to take on the Dolphins, and were defeated 15-13. The Ravens lost yet another close game and this time they were their own worst enemy, committing two costly turnovers at the end of the first half, which resulted in 15 points for the home team.

Matt Shaub is no Joe Flacco, let's make that clear. This guys middle name should be pick-six. Before halftime, he threw an interception, and then the defense ave up a touchdown on the very next play. Then Shaub did what he does, threw a pick six for another score. The Ravens jumped off sides on the extra point, attempting to block it, so the Dolphins went for 2 points, and got it. Which put the Ravens in a 15 point hole.

But the team dd fight back. Like always, the Ravens made things interesting in the end, but were unable to get the ball into the end zone when they had good opportunities. But my real big issue was with the guy whose one job is to kick the ball through the uprights. Smh.
Justin Tucker has gotten worst. I know, the whole team has, but even bad teams should be able to count on their kicker. The guy has been off all year. He can't kick the long ball anymore. He missed to 50 plus yard kicks yesterday and we lost by 2 points. the defense balled their ass off, and we couldn't get a damn field goal. But he's not the only problem, and truly don't want to blame him for our loss, but got damn. Its getting ridiculous.

Anyway, the Ravens fought hard and came up short once again. A constant theme for 2015.