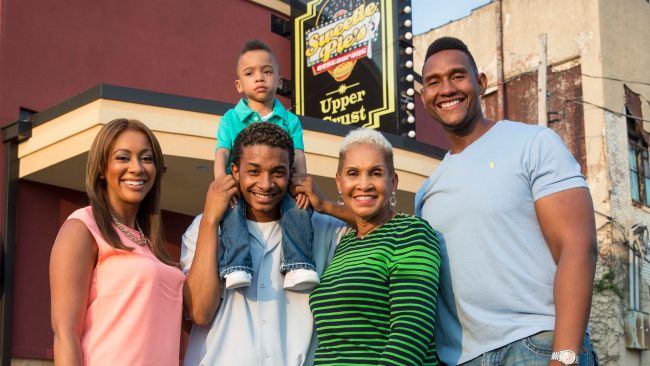 By: Larry Causion Jr.    CausionCreations.com
Posted: Monday, April 13, 2015
One of my favorite reality shows comes on the Oprah network, OWN, Saturday night's at 9pm, and that is Welcome to Sweetie Pie's.

Sweetie Pie's is a restaurant that was started in St. Louis, Missouri by the owner and head Chef, Ms. Robbie Montgomery. Ms. Robbie used to be a back up singer for Ike Turner, and she is a famous Soul food cook in the South.

Every Saturday we are brought into her world, which focuses on her family running their business, which now includes 5 restaurants. 4 in St. Louis, and 1 opening in LA.

Miss Robbie reminds me of the real life version of Tyler Perry's Madea. Ms. Robbie doesn't bite her tongue and she tells it like it is. The relationship between Ms. Robbie and her son Tim is absolutely unique. They lay each other out and act more like an old cranky married couple than mother and son. It's hilarious.

Since the show's inception we have been brought in to see the real life obstacles the family has faced including; the strained and broken relationship between Tim and his ex fiance Janay, the complicated birth of Tim's premature son TJ, the delays and obstacles in opening new restaurant locations, and the broken deals and relationships with business partners and employees. Without question, Welcome to Sweetie Pies is one of the realist reality shows on TV.

This season we watched as the cast were directly affected by the Mike Brown murder, and verdict in Ferguson Missouri, which is where Sweetie Pie's Mangrove restaurant is located. We saw the impact of the looting and riots. And we heard testimonies of the cast affected by senseless murders.

Indeed this is an excellent reality show. It is highly entertaining and I love it.

You should be sure to check out Welcome to Sweetie Pie's from the beginning, but the 5th season finale airs this Saturday night on OWN.