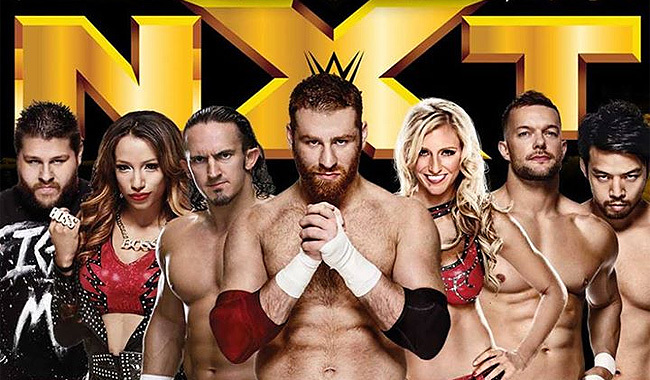 NXT: The Future of the WWE 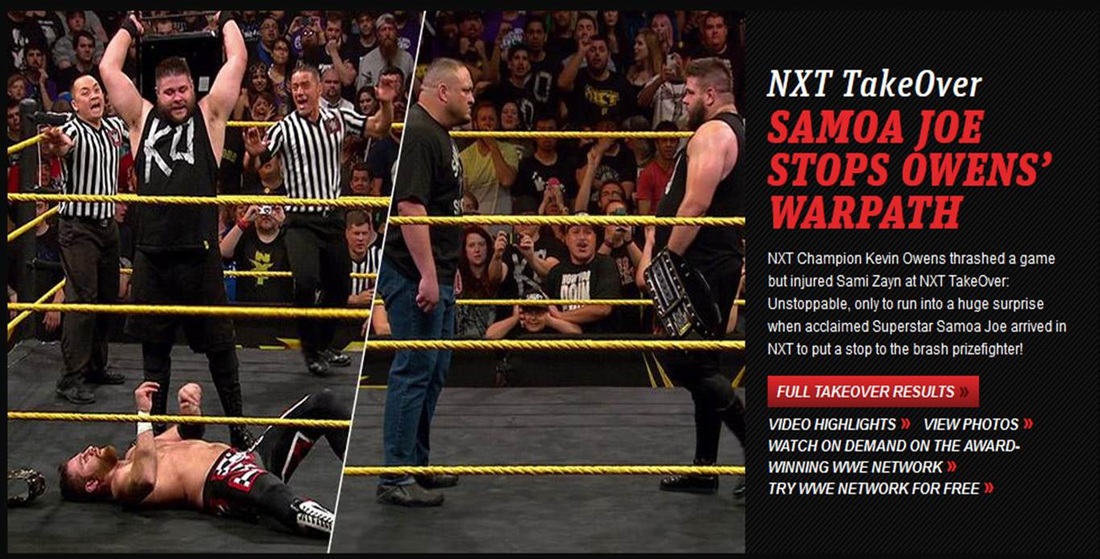 Overall, the show was pretty good and including some showcase matches for great performers such as Finn Baylor, Charlotte and Bailey, Sasha Bank and Becky Lynch, and f course the main eventers, Kevin Owens and Sami Zayn.


But the huge story and news of the night was the surprise arrival of former long time ROH and TNA performer, Samoa Joe. Rumors of Joe's signing have been much talked about for some time, but a deal was not struck last we heard. Well, as far as we can tell, he has signed a deal which will allow him to still work Indy dates, and work part time for NXT until something else is worked out.

The signing of Joe is great move, for a company that has changed its focus over the last few years, into becoming more open to signing Indy guys who have a great reputation form other organizations, and allowing them to be featured in NXT as the future stars of the WWE.

In many ways, the signing of both Kevin Steen and Samoa Joe are examples of the change in philosophy the company has undergone, and its certainly for the better. Guys with the body type of these two performers would have been typecast or overlooked in the past. Guys like Sami Zayne, Adrian Neville, Hideo Itami, and Fin Baylor would not be featured performers due to their height and lack of size.

But I must give HHH credit, as he has led major changes in the mindset behind the formation of WWE's developmental system. The system is not all about finding guys who are completely raw and training and molding them to fit a cookie cutter image. Now, the WWE is simply recruiting and signing great performers from around the world, whether from NJPW, ROH, TNA or PWG.

But in many ways this was started before NXT even begun. Let's look back at the previous developmental system, FCW. This is where HHH laid the groundwork for the future we are now seeing.

FCW had roughly 45-50 wrestlers training, most of which never made it on the main roster. The best talents in FCW, Seth Rollins and Dean Ambrose were trained and spent years doing independent style before they got there.

That has always been a a recurring theme with WWE "developmental". There are very few guys that they have built from scratch. Some that come to mind are Sheamus, Wade Barrett, The Usos, Roman Reigns, Big E, Rusev, Bray Wyatt, Bo Dallas, and Adam Rose.

The WWE is now of the mindset that they want the best talent, and the signing of Samoa Joe is more proof of that. So as for his arrival, it happened after the main event last night.

KEVIN OWENS VS SAMI ZAYN FOR THE NXT TITLE

They had a really good match going out fast, and at about 7:00, Owens power bombed Zayn on the apron.  They played it up like Zan's shoulder went out and the match basically ended at that point.  Owens kept attacking Zayn while the refs tried to stop him.  Finally William Regal came in and tried to stop him. Owens continued to attack Zayn and Regal pulled him off by ripping his nose.

But Owens head-butted Regal out of the ring and kept attacking until Samoa Joe came out.  The two went face-to-face.  For this audience, Joe was this huge superstar and they went crazy at the face-off, and of course, Owens backed down and left.  It looks pretty clear that the Zayn injury is serious and this was to write him out.  The Owens-Joe thing worked big-time.

Afterwards Joe took the mic and said he's been talking to people and they told him that if you wanna do this, be with the most violent and best wrestlers in the world, well you gotta come to NXT. He said "Joe is happy and Joe is here.
I am Samoa Joe. I am pro wrestling. And I am now here, at NXT".

It will be very interesting to see what's next for NXT. HHH has described the remainder of 2015 as an experimental year. They will be running more and more shows on the road, not just around the country, but are talking about a European tour. They are looking at running different types of buildings to see what works and what doesn't work, and doing some festival touring as well.

The plan for 2016 is for NXT to be a full-time touring brand, running three high shows per week in a certain part of the country, just like the other two major tours. Thus far, the fan reaction at every show outside of Florida has been phenomenal. This year the question is what is the drawing power when they go into markets and play them a second time, and figure out what size of building they're best suited for.

HHH said the ultimate goal would be running both the national touring NXT shows, as well as running at the same time, the smaller Florida arena shows in the 250 to 500 seat buildings, giving the younger talent ring experience and maybe keeping some headliners. He said this is the goal for a few years down the line.

This makes sense because they've now got somewhere in the range of 65 to 70 wrestlers in Orlando, and the only way they can really learn the business is to perform in front of live crowds regularly. In addition, as this week showed, for the green wrestlers appearing on the national tour where fans expect a certain level of work, they can get crapped on, which wouldn't happen in the Florida shows where it's a smaller crowd but more understanding that some people are just starting out.

HHH noted that no matter how much buzz and success the NXT touring brand has, he can't lose sight that the goal is to get the wrestlers ready for Raw and Smackdown. He's trying and succeeding in establishing the mind set that the talent is building NXT and it's not wasting your time until the call up, but that NXT is not meant as the final destination for those with talent to advance.

Right now it's a Vince McMahon call as to who and when people get brought up, and it may be people in the middle of a program, and some may not have a spot on the main roster for a while, even though most of the people featured here are ready to be on the roster, and several could walk out on any given Monday, like Kevin Owens and Sami Zayn did, and be ready to be top guys.