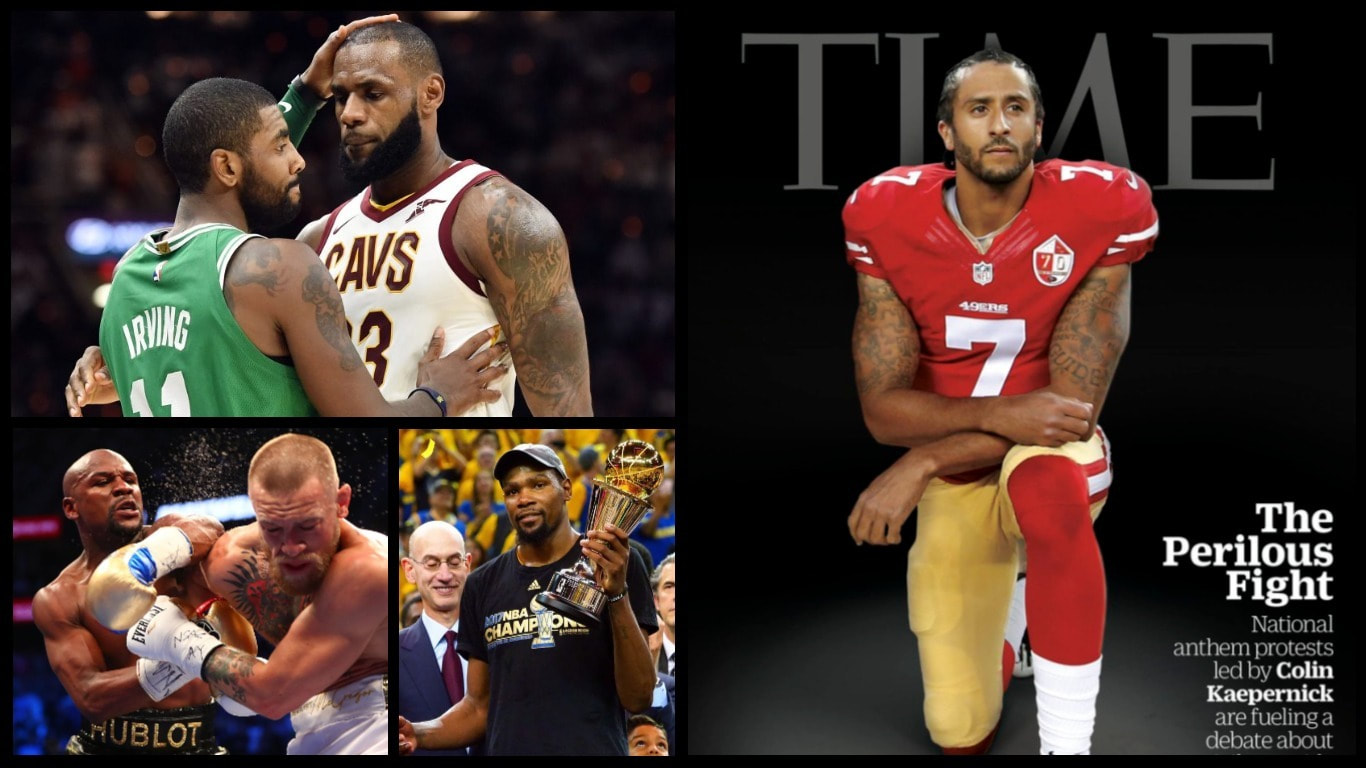 TOP STORIES OF THE PAST YEAR

What a year for the Philadelphia Eagles!! Last offseason, I was extremely impressed with aggressive moves the Eagles front office made to improve their roster and give their team the best opportunity to win. They added WR Alshon Jeffery, LeGarrette Blount, Torrey Smith, Chris Long, and Timmy Jernigan to a team that already had some pretty good pieces, headlined by the second year for top draft pick Carson Wentz. And boy did those moves pay off! Wentz was sensational all season and would have been the MVP had he not gotten hurt and missed the final four games.

​But as great as Wentz was, the real story was how great of team that was constructed. That's why Nick Foles was able to come in and put together  a great championship run. I'm not trying to diminish Foles, but for me, Doug Peterson and the front office are the main reason why they are champions. The game plan utilized the skill players to perfection, and guess what folks, the team is just getting better. 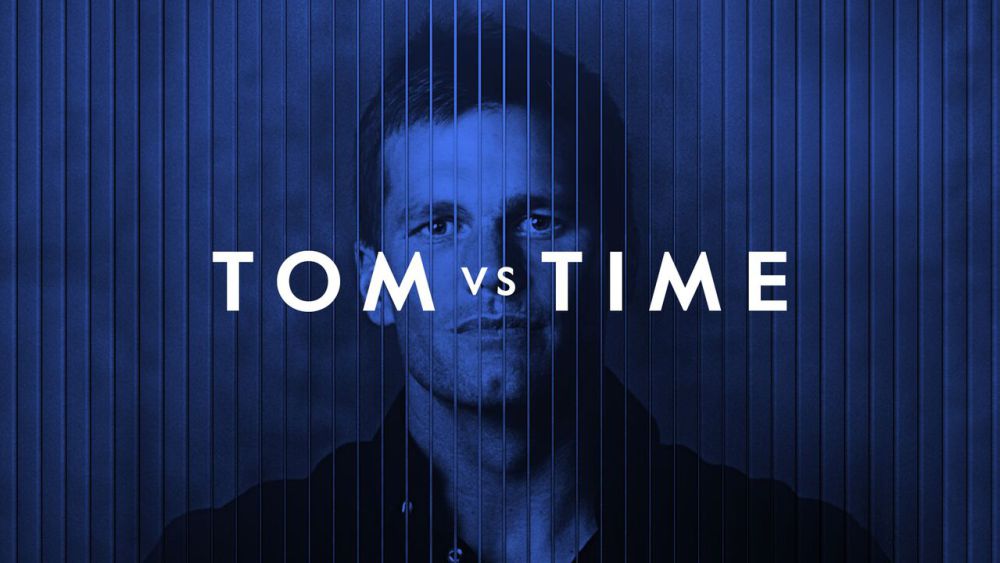 Tom Brady won the MVP award for the 2017 season because he's a 40 year old QB, who is playing at an all time high. I give him great credit, and he quite certainly is the most clutch QB (outside of this years Superbowl) that I have ever seen. You can never count him out, and he seems to get better. And he knows it to. So much so that he produced his own documentary during this past season called Tom vs Time. He documented his entire MVP season. Hell, he's great, he can do that.

But.... I just don't like the guy. There are many reasons why and the first being his persona and personality rubs me the wrong way. He comes off like a privileged white guy who always gets his way. I know that may sound bad to some but that's the complete truth. There are fans who hated players like Deion Sanders or Floyd Mayweather because they come off as cocky and flashy entitled prima donnas. Well, that's how I view Tom Brady. It started with the tuck rule game against Oakland, then it snowballed for me. You know, I'm going to dedicate an article to this in the coming weeks, so I will save the rest for later. 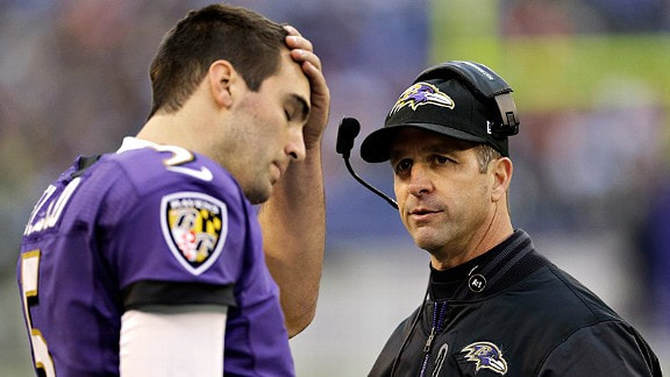 All the Ravens had to do was win a home game against the lowly Cincinnati Bengals on the last game of the season, and they were in the Playoffs. So of course, they choked. They came out flat, dug themselves a huge hole, had to fight back against a team they should've buried, and then choked it away in the end. A familiar scene if you have been a fan of this team over the past five years. Since the Super Bowl we have been the definition of a mediocre franchise. Not good enough to be good and not bad enough to justify blowing this team up and starting over with top draft picks. And because of that, even though we sucked again this year, our salary cap number is high and we have no room to ak eany significant upgrades.

​And it starts with the QB, Joe Flacco, who continues to prove all his naysayers right. He has not lived up to the contract and he does not elevate the team to the next level. His numbers have been terrible and his offense is yough to watch and be a fan of. This season was a complete disappointment, and to be honest, I have no hopes for 2018 being any better. 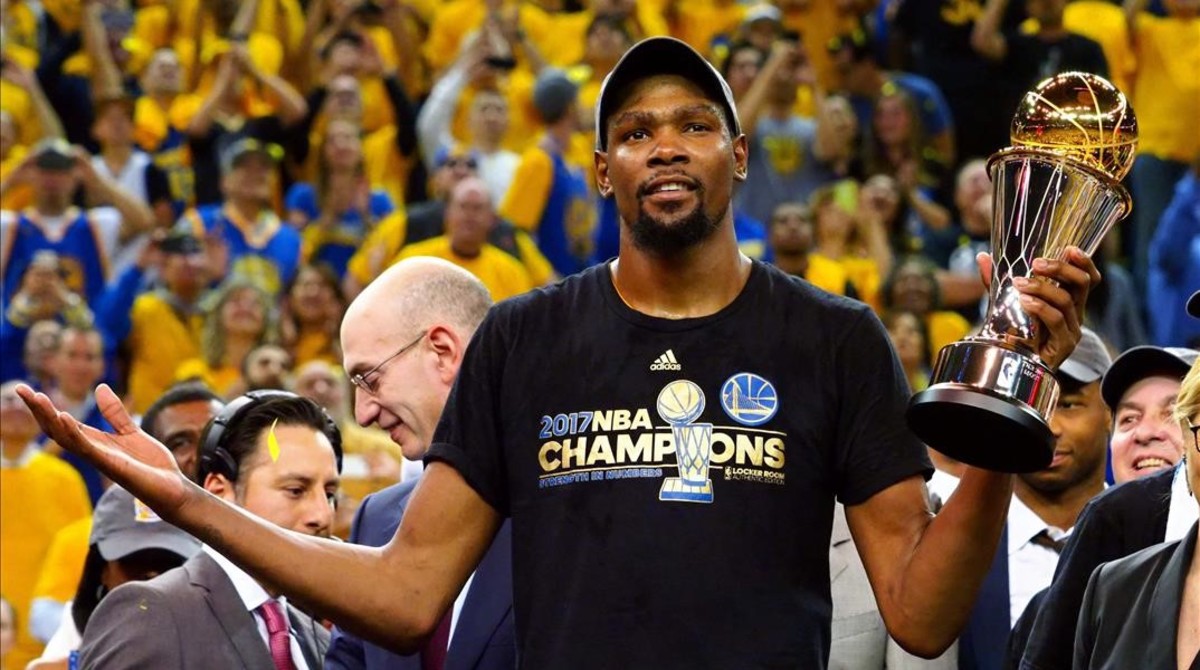 When Kevin Durant made the decision to join the already stacked Golden State Warriors team in the Summer of 2016, we all knew they were the instant favorites for the title in 2017. Well, they did what they were supposed to do and Kevin Durant earned his first title. He was named finals MVP after he came up clutch throughout the five game series where he beat the best player in the NBA, Lebron James, head up. And honestly, my hats are off to him. KD was playing with a stacked deck, but he still needed to pull it off. If he wouldn't have, it would've been the biggest choke job in history. 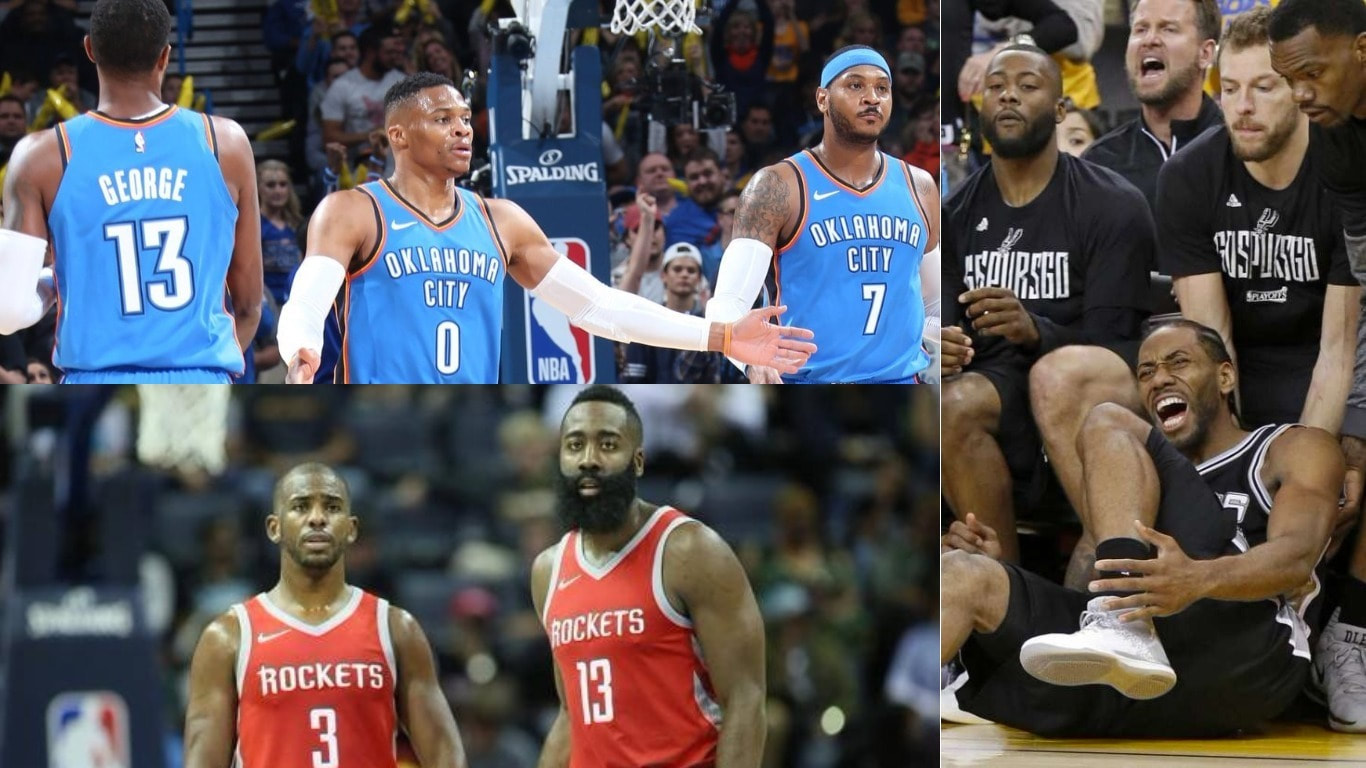 Last Summer brought a lot of change to the superstar balance in the NBA, as teams looked to respond to the juggernaut that the Warriors put together the before. We saw Carmelo Anthony and Paul George, two guys who have been leaders of their franchises, leave the East and join Russell Westbrook in OKC. That was a hell of a shocker at the time, but to be honest, I never had faith in the dynamic. Melo has not been the that guy since his first year in NYC in my opinion. He misses way too many games, and he's too inconsistent. Paul George is a solid number two player and the combination of he and Russell is good enough to compete. I just don't see them as a team I could see going all the way.

On the other hand, the combination of Chris Paul and James Harden in Houston has worked out tremendously and they have the best record in the NBA. I knew they would be good, but I didn't see this coming. Both guys are able to score and distribute the basketball from the point guard position, and Harden has been the MVP, no doubt. The real key is the three point shooting this team can rack up on the nightly basis. They also get to the free throw line, led by Harden, routinely. That means they not only shoot, but they drive and draw contact. They are the biggest threat to Golden State. I certainly hope they match up in the playoffs.

And then there is my Spurs. Smh. Kawhi Leonard has been out almost all year, battling injuries. It's baffling at this point what the real story is. We will touch on this more in long form in the coming weeks. 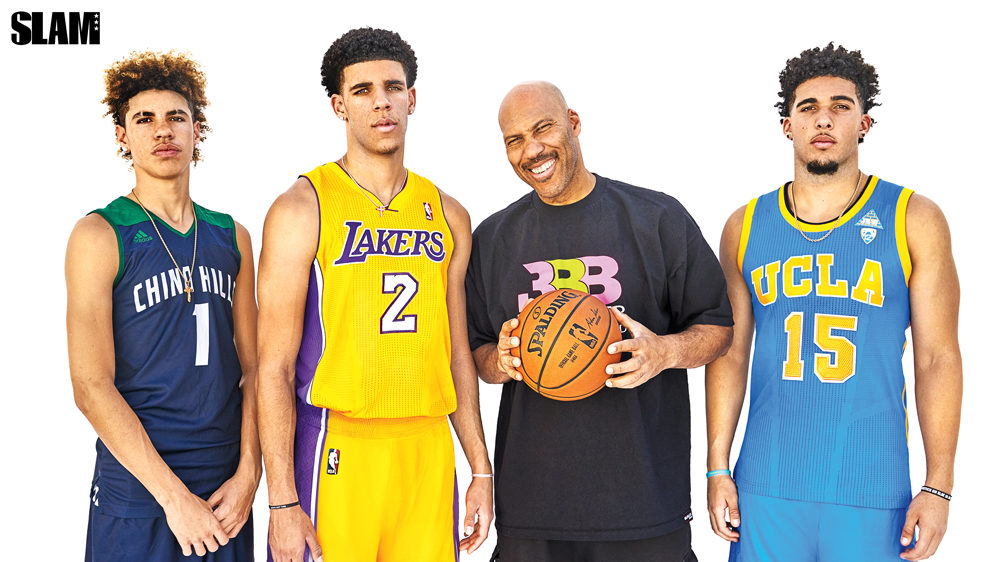 The real tragedy of me being away from the website for most of 2017 is missing the opportunity to dive into the Lavar- Lonzo Ball frenzy that has unfolded. There are certainly things about Lavar I like and things I really despise. And Lonzo is the most overhyped, oversenationalized player I have ever seen. And he has not lived up to all the talk and attention he receives. I completely credit Lavar with pulling the wool over the eyes of not just pundits, writers, and the general public, but he tricked Magic Johnson. Lonzo has been in a bust in year one and for that to change, a lot more than his Daddy not running his mouth, needs to change. You know I got more on this coming. 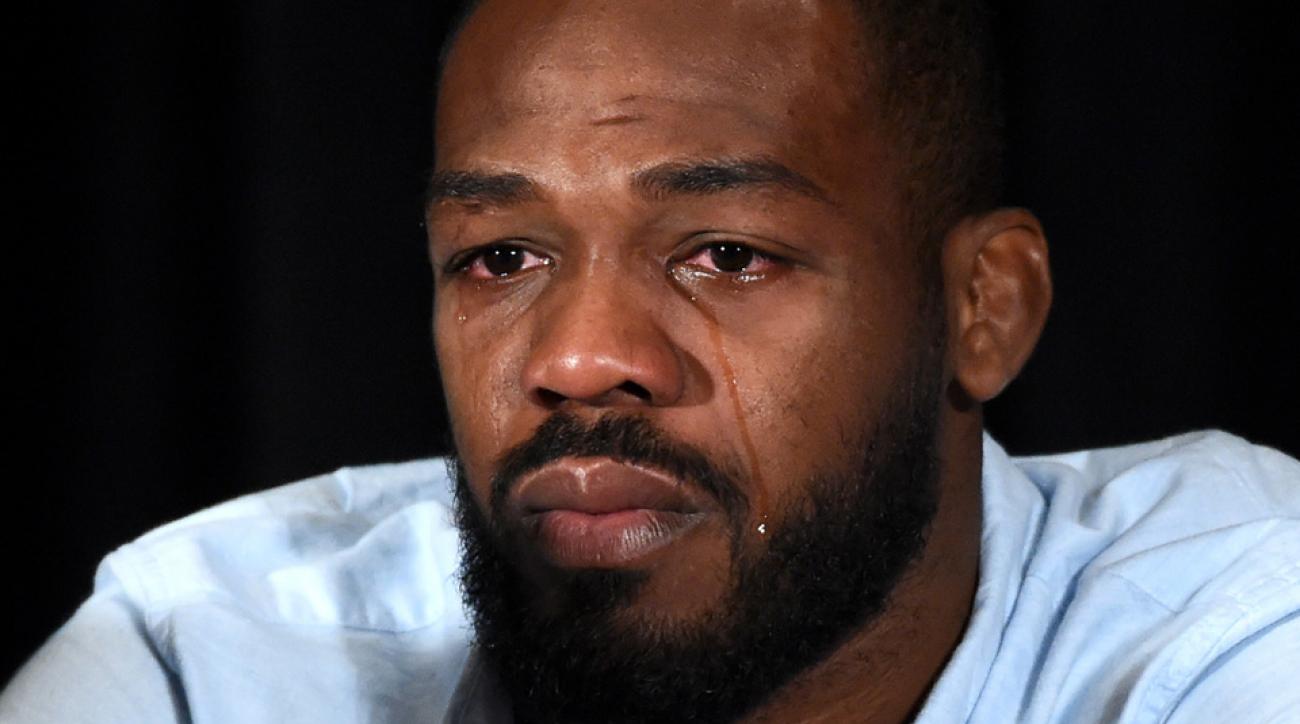 The biggest story in UFC in 2017 was the lack of star power and big fights we saw. Really, it was the worst year for UFC in many years, as the company has been climbing basically since season of the Ultimate Fighter. But last year, between injuries, sabattacles, and suspensions, we didn't get the star power or big drawing fights that have made the sport what we expect it to be. Conor Mcgregor, a two division champion, didn't even have a MMA fight, Ronda Rousey got smoked early in the year and left the sport, and then there is Jon Jones. Smh.

Jon Jones failed another drug test and was suspended again in 2017. After knocking out Daniel Cormier in July, and looking like he was back on top of the world, his test came back dirty. I swear, if this idiot knowingly took steroids, after everything he previously went through, he has to go down as the dumbest superstar in the history of sports. This tie, his career may be over, as he is facing a four year suspension for his stupidity. What a waste of talent. It's really pathetic and if I were Dana, I'd never book him again.