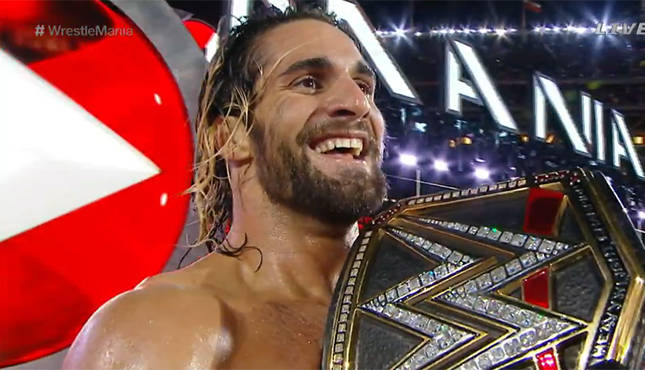 By: Larry Causion Jr.    CausionCreations.com
Posted: Monday, March 30, 2015
Wrestlemania 31 is now in the books and let me say right off the bat that without deeply thinking long and hard about it, I will say this is the 3rd best Wrestlemania of all time.

What a great damn show. For a 5 hour show, longer than any I can remember, the show was paced with perfection and there were no bad matches, unlike any WWE show I can remember in recent memory.

As I stated last week, Brock Lesnar signing his new deal before Mania and it being made public, was the greatest thing Vince McMahon ever did. Because fans knew Brock was signed and wouldn't be leaving after the match, the live audience didn't crap all over the main event. I just will never forget how the fans destroyed Brock and Goldberg at Wrestlemania 20, angry that Brock was deserting them. But by Brock signing and the people knowing, they embraced Brock as their BEAST and it was EXCELLENT.

By Brock signing, all options for a finish were on the table and what a damn great finish it was.

The match itself was spectacular. It was much like the Cena vs. Lesnar SummerSlam match with all the suplexes over and over.  Lesnar hit one F-5 early but didn't try the pin.  He hit a second one and Reigns kicked out.  He hit a third one and Reigns kicked out again. Reigns bloodied Brock early, legit and they beat the hell out each other with stiff shots. Brock absolutely punished this guy until Reigns threw Lesnar into the post and Lesnar bled like you wouldn't believe.  He was bleeding all over the place and Reigns made his comeback.  Reigns hit several superman punches and Lesnar didn't even go down.  He finally put Lesnar down on the third Superman punch and hit two spears but Lesnar kicked out.

Reigns tried a spear but Lesnar picked him up and gave him another F-5.  Both were out cold.  Seth Rollins came in and cashed in his Money in Bank. It became a Triple Threat match.  He went for the curb stomp on Lesnar, Lesnar put him on his shoulders for an F-5.  Reigns then speared Lesnar and both went down.  Reigns and Lesnar were out and Rollins gave Reigns the curb stomp and pinned him, so Rollins won, Lesnar didn't lose and Reigns were protected in losing.

Excellent booking as the contenders are lined up now. The crowd went crazy.

This match vastly overachieved and was an excellent nostalgia moment. We were in my house popping like it was 97!! The finish aside, as you had to know HHH was going win, I thought the booking was so great. We got DX, Billy Gunn, Road Dogg and X-Pac coming out to help HHH. Crowd didn't know how to react because they were attacking Sting, a baby face. Sting did a hug dive off the top rope to the floor on all of them. But then the NWO music hit and the crowd went CRAZY, as Hollywood Hogan, Hall and Nash came down, and a fight broke out. I was popping like crazy when Hogan actually took a bump. Then out of nowhere HBK appeared and gave sweet chin music to Sting. Crazy good. In the end, the boss won, but it was great.


The Rock making his return and bringing Ronda Rousey in the ring to confront HHH and Stephanie was a hell of a moment. I wanted Ronda to break her arm, but maybe they will save it for next year.


The ladder match for the IC title was filled with high spot after high spot. Action was fast paced and the crowd loved it. Daniel Bryan winning was the right move and they made it a big deal, as Bryan winning the belt automatically makes it more important.


The finish to the Orton vs Rollins match was the best finish I ever seen, as Rollins went for the curb stomp and was propelled into the air and caught with an Excellent RKO out of nowhere. Great replays too.

Undertaker looked alright after a year off. The aura wasn't exactly there, especially during the entrances, because it was still daylight and part of the lure of both entrances is the dark arena setting. As for the match, at least they kept the pace up and it was pretty good.

Cena winning the U.S title was the right thing for business, much like Daniel Bryan winning IC title. In order for the importance of these belts to be elevated back to the status they formerly had, real superstars must carry the belts. Rusev losing won't hurt him. Match was pretty good though.


The battle Royal was pretty entertaining and Mizdow finally snapped on Miz. I felt it should have led to the finish, but Big Show has to finally when something sometime. The Bo Dallas elimination was hilarious.

The tag title match was an excellent action packed opener, and I was happy the guys were able to get some time to put on a spot fest. Big stadium shows are tough, especially when crowd is still entering, but I thought they did good.

I went to the bathroom during the divas, sorry.

Overall a great show and the best Mania since Wrestlemania 21, ten years ago. Not a bad match on the card.

Can't wait for the fallout, as the new season begins tonight on RAW.