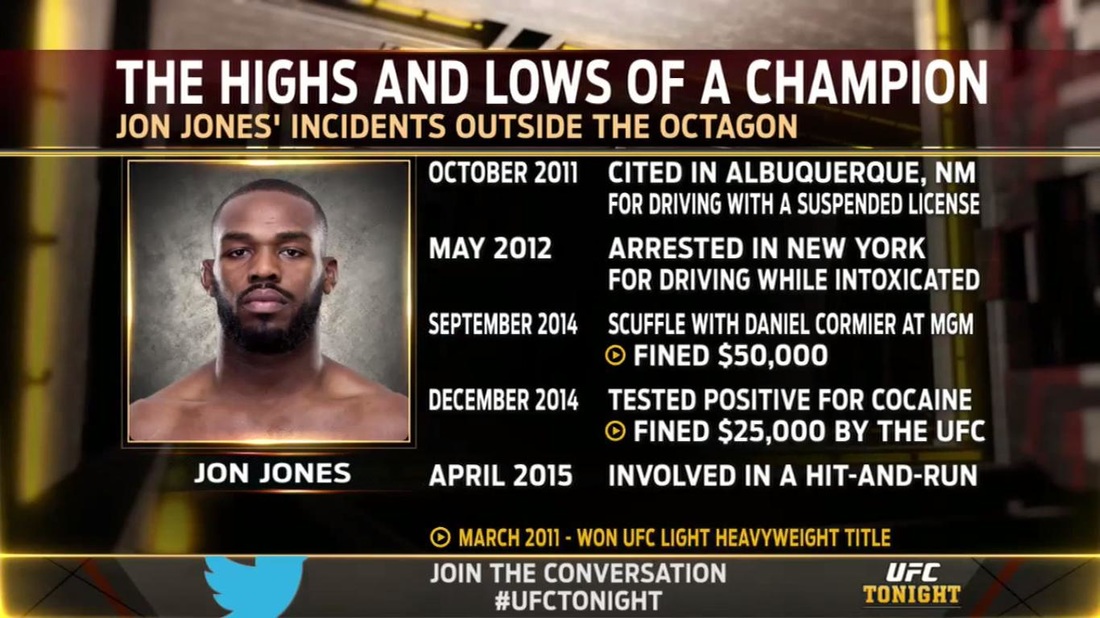 Jon Jones looks to be serving no time in jail after agreeing to a plea bargain guilty plea for felony leaving the scene of an accident. Jones has agreed to serve up to 18 months of supervised probation and make 72 appearances for charity and speaking with children.

In a hearing on 9/29, ironically just days before the title he vacated was to be defended by Daniel Cormier against Alexander Gustafsson in Houston on PPV, Jones pleaded guilty to Leaving the Scene of an Accident that involved significant bodily harm, a fourth degree felony. He was also given a conditional discharge based on completing the terms of the agreement.

Jones has to appear at least 72 times, one for each week of his probation, at martial arts schools, grade schools and middle schools, to speak with children in Barnalillo County about the importance of making good life choices.

Any violation of probation could result in his being sentenced to prison for the remainder of his probationary period. The plea bargain also is that if Jones serves 12 months of probation without an incident, he can request a hearing to terminate or lessen the remaining six month period. All remaining charges against Jones were dismissed.

Jones, 28, arguably the most talented MMA fighter in history, was reported to have run a red light on 4/26 while driving a rented SUV, and slammed into a car driven by Vanessa Sonnenberg, a pregnant woman, who suffered a broken arm in the accident. Jones was charged with leaving the vehicle after the accident and running off. He then ran back, grabbed cash out of the car, and ran off a second time, leaping a fence. Albuquerque police couldn’t find Jones for about 24 hours before he turned himself in.

Jones was identified by an off-duty police officer who was near the crash site, who knew immediately who he was. Police found information with his name on it in the car, as well as UFC memorabilia, and a marijuana pipe.

Jones was released on bond and has made full restitution to Sonnenberg, who has fully recovered from her injuries according to Jones’ attorney, Vincent Ward.

Jones was suspended by UFC and stripped of his championship, with Dana White saying he had run out of second chances. He also lost several key sponsors.

White was in court with Jones. Jones has already been back to training at Greg Jackson’s gym. White had said that as soon as Jones put the charges behind him, he would be given the next shot at the championship.

Whether Jones will meet Daniel Cormier for the title he never lost in the cage has not been made official yet, but we all know that is the most likely outcome.

UFC released a statement after Jones’ sentencing, saying, “The UFC organization is aware that Jon Jones reached a plea agreement with authorities in Albuquerque, New Mexico this morning stemming from charges associated with a motor vehicle accident earlier this year. As a result, UFC, through Las Vegas-based law firm Campbell & Williams, will thoroughly review the agreement before discussing Jones’ possible reinstatement to return to competition. More information will be made available following completion of this review.”

The Los Angeles Times had strong words stating that this case shows “There are rules for the rest of us, and then there are those reserved for the likes of Jon Jones,” and saying that “as Jones knows, having the right people in your corner can make the consequences of those stupid decisions go away.”

Jones, 21-1, was 23 years and eight months old when he defeated Mauricio “Shogun” Rua on March 19, 2011, in Newark, NJ, to win the UFC light heavyweight title. Jones took the title shot on late notice after a knee injury to teammate Rashad Evans. In one of the better storylines, Evans encouraged Jones to win the title shot that he had earned, and then, when Jones won, Evans said he would never challenge for the title because of how close they were. Jones, however, said that he would be willing to fight Evans, which Evans saw as an insult, which led to a major match that Jones dominated and won via decision.

Jones was the most popular rising star in the promotion at the time of his title win. However, in the buildup of the Evans fight, the way both men reacted led to a noticeable change in reaction.

His critics have used the following examples as reason to diminish Jones career and characterize him as a phony. I don't agree, but these are the incidents that in the minds of many have made him less popular.

He refused to face Chael Sonnen on short notice after Dan Henderson pulled out of a title fight due to an injury, which resulted in UFC 151, a PPV event on September 1, 2012, being canceled, which he was heavily criticized for by other fighters, even teammates, since injuries and fight changes are commonplace in the sport, and Sonnen was much smaller and given little chance against him.

He also refused a rematch with Alexander Gustafsson after Gustafsson had given him the toughest fight of his career in what is considered the greatest light heavyweight title fight in modern history.

He also had a brawl at a press event with Cormier. There was also videotaped footage when Jones and Cormier were arguing shortly after the brawl, which showed Jones completely different, bragging about how easy it was to beat Cormier up, when neither man knew they were being filmed, and then Jones doing a 180 from there.

There was also a cocaine test positive a month before his fight with Cormier. Because cocaine is only a suspendable offense in competition, in theory, he never should have been tested for it. Then he even talked about possibly suing the commission after it came out. Then, after publicly agreeing to go to rehab, he only stayed for one day before claiming doctors gave him a clean bill of health.

After being on the verge of one of the company’s most popular fighters and expected to be its flagship star for many years to come after beating Rua, fans have been conflicted on Jones. Jones’ ability and guts can’t be denied. He gutted his way through a tough test in Gustafsson, a fight he didn’t take seriously, and won it in the final rounds. While nobody would say so publicly, it is well known Jones didn’t train hard for the fight, and could have lost the title had he been unlucky in scoring (it was a unanimous decision and I actually had Jones winning four of five rounds, but several rounds were close).

The great ones are able to survive the wake-up calls that the very good ones can’t. He injured his elbow when caught in an armbar by Vitor Belfort, but didn’t tap and smashed the smaller and not as well conditioned Belfort for the rest of the fight after escaping.

He fought Cormier in a close-range grinding wrestling style match and out- wrestled a two-time Olympian at his own game.

But his ability in the cage conflicts with tons of outside the cage behavior, and the feeling that his public persona is phony. If there was any question that wasn’t the case, it was pretty strongly exposed on the tapes after the brawl and by his arrests and drug test failure, after he had won the title and made a point that he wasn’t the kind of athlete who would be doing drugs.

Jones being stripped of the title ended his streak of eight title defenses, two under the record set by Anderson Silva. Jones had stated his goal was to break that record. Jones still has an intact record of 12 consecutive wins, second of all-time behind Silva’s 16.

Many believe Jones will be a bigger drawing card upon his return, giving the UFC a third major draw along with Conor McGregor and Ronda Rousey. The Jones vs. Cormier fight is believed to have done well over 800,000 buys, even against strong NFL playoff competition, the second biggest number of this year and is still widely considered the biggest single UFC fight of recent years. For different reasons, a rematch with Cormier would be expected to approach if not beat that mark.

If Jones was to win the title back, and he would be heavily favored to do so, he’d be short on contenders, as he’d just have Anthony Johnson left, the opponent he was scheduled to face when he was suspended. Cormier replaces Jones and defeated Johnson to win the vacant title. Johnson does have ferocious knockout power, but would give up speed and versatility to Jones. Jones had talked for years about eventually moving to the heavyweight division.

Jones will get a title shot as soon as he is reinstated and asks for it. Right now, there is no indication from anyone when that will be. Cormier said he will fight Jones anywhere, and won’t retire until he has two more fights with Jones, but he will not fight him on the proposed 4/23 date in Madison Square Garden. Cormier felt that Jones would be booed everywhere because of being Jon Jones and the recent hit-and-run case, but that wouldn’t be the case in Madison Square Garden.

As for Jon Jones, his greatness will be dictated by whether he can keep his nose clean and head on the straight. In the cage, he's the best I have ever seen.