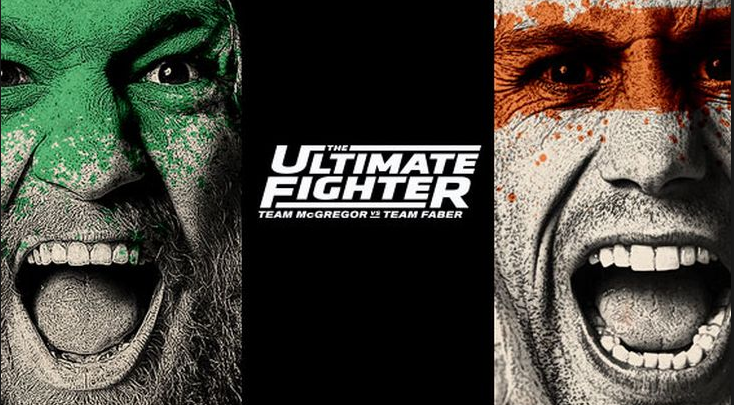 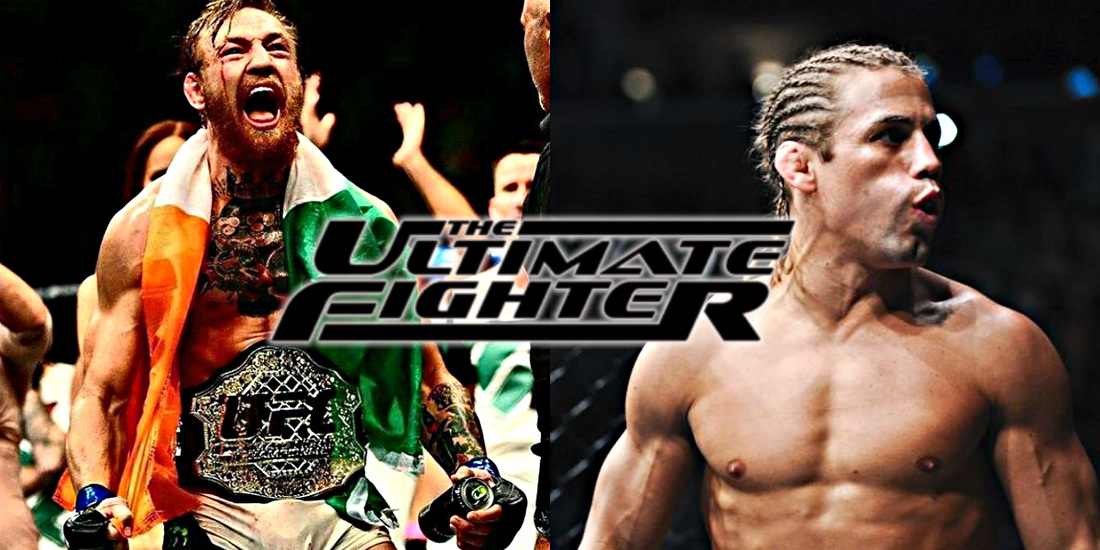 Apparently the Team McGregor strategy is to have a light workout in the morning without their coach, then an intense session with technical instruction including McGregor in the evening. Dana White says he acts like he doesn't give a f--- when the truth is that he really does.

Chris Gruetzemacher says his dad was shot and murdered when he was only five. It's part of what made him focused and convinced him to be a fighter, and make the most of his athletic ability while he still has the time to.

Sascha Sharma talks about how his dad emigrated from India to Germany decades ago, and how he had an infection in childhood that left him paralyzed for a time. He had to train to walk, he had to train martial arts to feel better, and after that he couldn't give it up.

Faber comes over to the TUF house to watch the T.J. Dillashaw fight where he finished Renan Barao standing, beating Barao for the second time (July 25, 2015). Afterward Sharma is 155 and Gruetzemacher is 154.5 on the scale. Dana thinks Gruetzemacher has it in the bag because he trains with Benson Henderson.

Sharma is in the gray trunks and "Gritz" as Faber calls him is in the blue. Sharma pushes Gritz into the fence as McGregor calls for him to throw knees and to be patient in the fight. Gritz takes him to the ground and Sharma goes for a triangle submission - but Gritz breaks it and lands a couple of hard and heavy rights on the ground. Sharma gets up and pushes Gritz into the fence again. Sharma single legs him to the ground but can't keep him down. 2:30 gone. These two are going really hard for what looks to be a long fight with a half hour of TV time left. Sharma pulls guard at 3:15 then tries to land upkicks but Gritz talks the half guard to land elbows. Gritz is passing furiously and Sharma is scrambling furiously - an intense amount of energy is being expended on both sides. Gritz ends up on top in guard and Sharma tries to get a triangle or armbar again but can't. On to R2!

Sharma lands a right hand and shoots immediately to open R2, but when he can't get it he flops to his back hoping to suck Gritz in. Gritz is more than happy to get on top and throw some elbows, then take a full mount at 51 seconds, but Sharma is able to escape it - not without getting bloodied. McGregor loses his cool when he goes to his back again and starts screaming "Stay on your f---ing feet!" Sharma rolls and Gritz nearly gets an armbar out of it. McGregor is screaming at Sharma to "end up on top out of it" and he does. Sharma gets swept though and Gritz is in side control. McGregor: "You need to find your patience in there. A patient man always prevails." Sharma manages to hold on and go for some upkicks when Gritz repositions, but Gritz gets big damage late and a mount too.

Dana White announces a sudden victory third round and McGregor screams at him to stay on his feet before we go to commercial.

Sharma ignores McGregor's advice and goes to the ground immediately, causing an exasperated McGregor to scream "WHAT THE F---?!" Gritz spins to take the back while throwing rights, but Sharma tries to trap his head for a choke. He's too exhausted to lock it on though and Gritz gets on his back again throwing rights at his head. It's a war of attrition and Gritz is winning. He passes to side and takes the back again. McGregor screams "up on your feet" but he's too whipped to even try. Gritz pushes him back down into half guard. McGregor realizes they've lost the fight even with two minutes left. Faber: "Don't do anything too crazy just keep eating him up." INDEED. Sharma spins on top with just over a minute left. Gritz motions like he'll stand up but sweeps with a half minute left. McGregor: "Very very poor. My God." Sharma is a bloody mess.