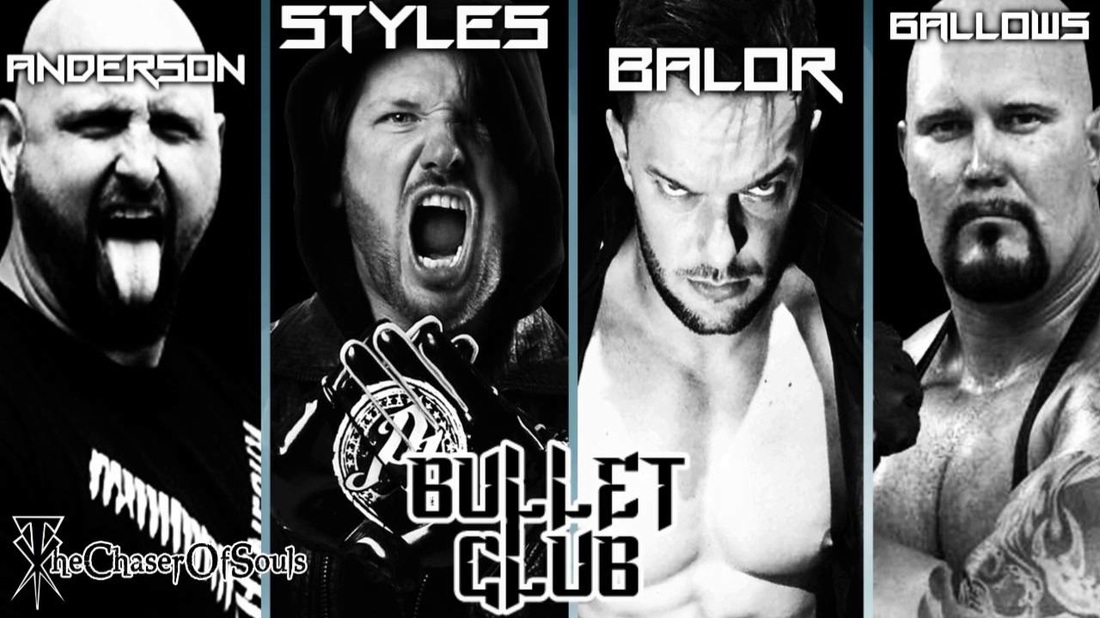 History of the Bullet Club 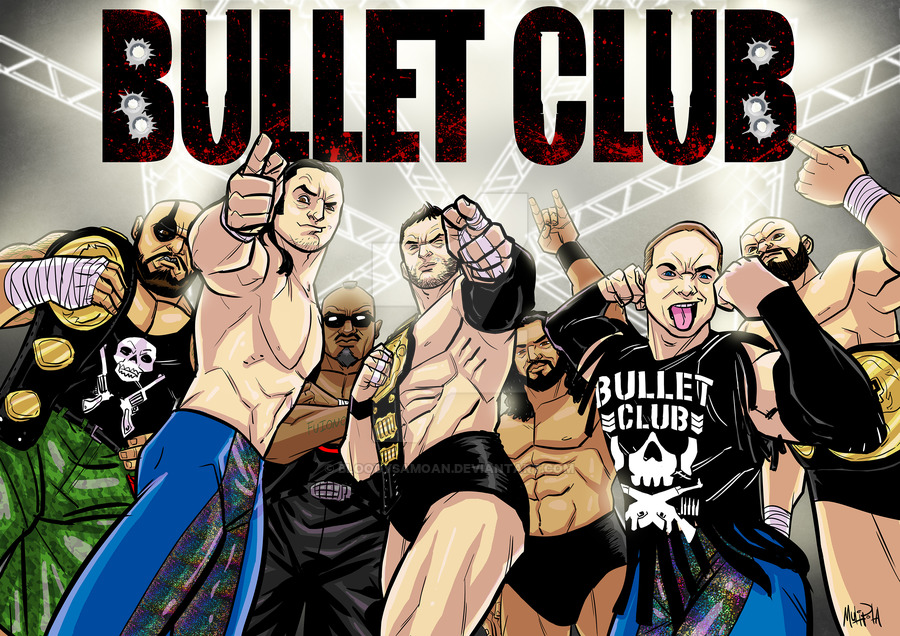 I'm fully aware that many of you read my wrestling updates are WWE fans. I know this because I can see the traffic for articles I post about other organizations like Ring of Honor, TNA, and New Japan Pro Wrestling. But that's too bad, cause I'm a wrestling fan, and I won't stop writing about the great wrestling I love from around the world. WWE is not the only show in town. And if you would take the time to open your mind, you would be greatly entertained by the great performers from around the world who may eventually debut on WWE TV.

Well that is exactly what is happening in the WWE today. You may have seen two big guys jump the rail and lay out the Uso's last week and wonder, isn't that Festus? But please get that out your head. That was Doc Gallows and Karl Anderson, two of the most important members of the Bullet Club. But they are not the only members in WWE.

​You have the founding leader of the Bullet club, as the NXT Champion right now. That's right, the man now known as Finn Balor, was known as Prince Devitt, and he started a revolution in New Japan Pro Wrestling. And his successor? Well, he's the current number 1 contender, AJ Styles. That's right, the Bullet Club is here!!! Let's take a walk down memory lane and educate those who may not know, about the greatest faction of this decade. 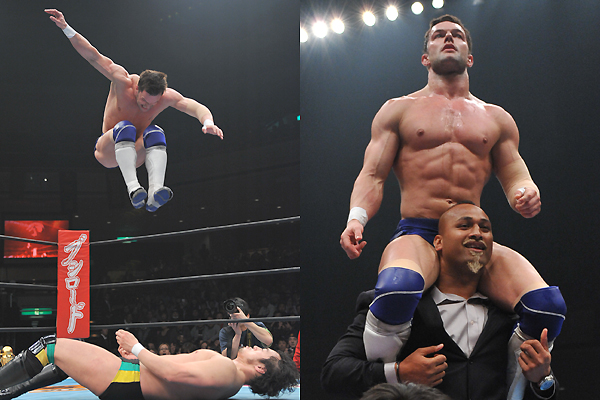 In 2013, Prince Devitt, who was great babyface, turned heel, and linked up with his new muscle, Bad Luck Fale. It was a hell of an act. Devitt was and still is one of the greatest in ring performers in the world, but it was his charisma and heel persona that really made him elite. Devitt used to get up on Fale's shoulders and was carried around like a King. It was great. He was a heat magnet.

​Devitt's next recruit was Karl Anderson, and they sealed the deal by joining Anderson to beat down Tanahashi, the top star in NJPW. Now the alliance was rounding out. They recruited Tama Tonga, and brought him in, and the rest is history. The Bullet Club was formed. 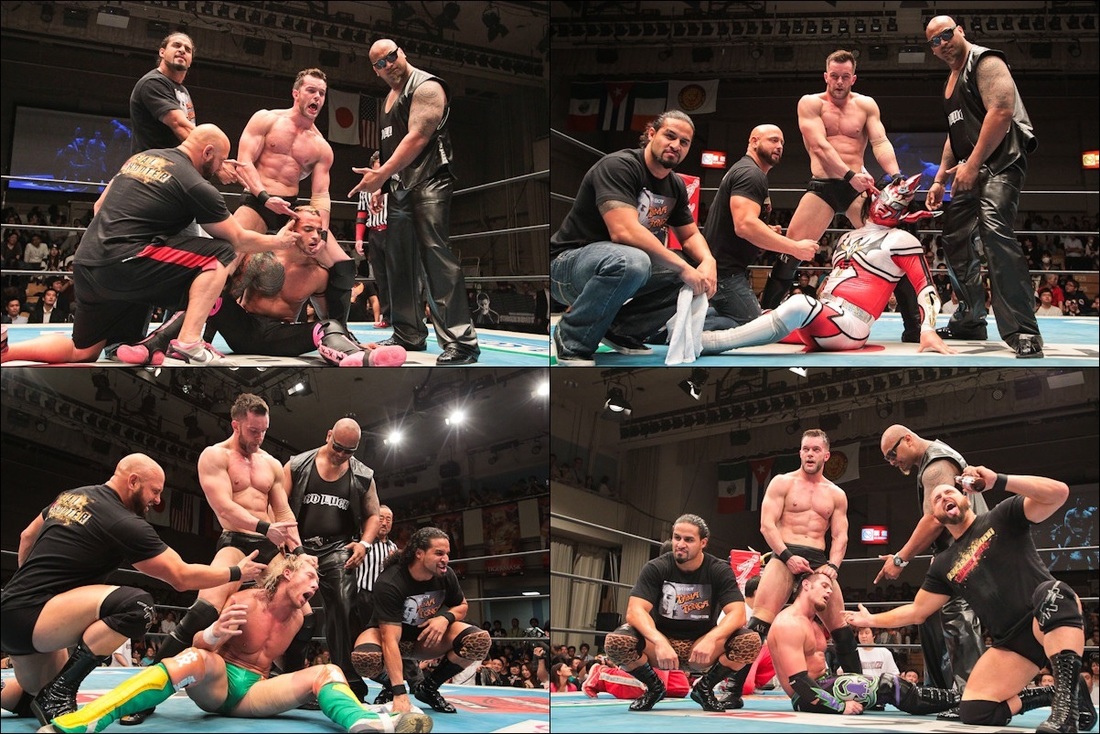 Devitt became unstoppable. He won the Super Juniors tournament handily and cemented himself as the top Super Junior in the world. Then he went on to beat Tanahashi, the biggest star in the promotion. I thought Devitt should have been given the IWGP title, because the group was a big time act at this point. But he lost to Okada, who was groomed to be the next huge star.

Then, much like the group they are patterned after, the NWO, The Bullet Club starting adding members. And it was for the better!! 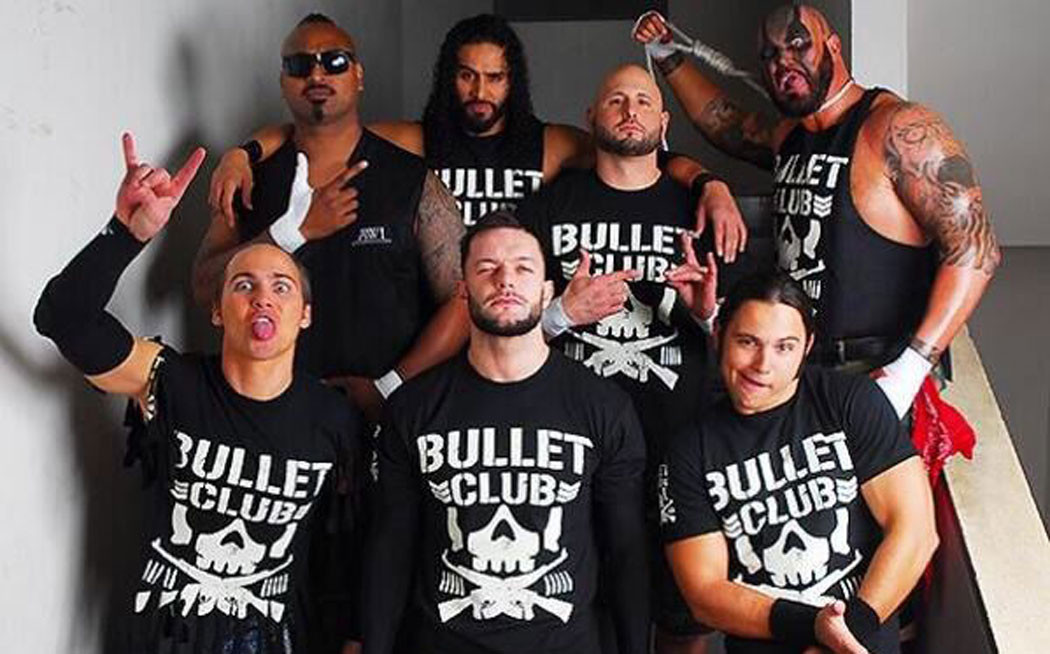 Devitt recruited the Young Bucks and Doc Galloway, who have become huge members of the Bullet clubs history. With a group of its size, many title were captured by the Bullet Club. Gallows teamed up with Anderson and they dominated the Tag team division, holding the belts for over a year. And the Bucks captured the Junior Tag team titles and became one of the hottest tag teams in the world.

The Bullet Club took a turn when Devitt lost a losers leave town match to his former partner Taguchi in 2014, a year after Devitt turned on him. The Young Bucks turned on Devitt and cost him the match and he was done with promotion. The reality was, Devitt was heading to WWE, and is there now in NXT as Finn Balor, the NXT champion. It was his persona and great performance as leader of the Bullet Club that made WWE recruit him hard and sign him. Interest were peaked, and people were noticing.

But the lost of Devitt didn't stop the train from rolling. 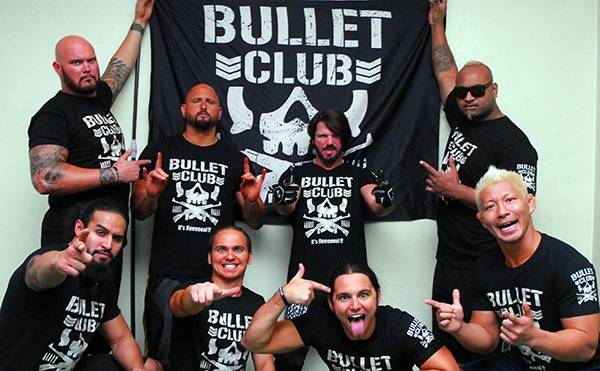 That's right, out goes Prince Devitt, in comes the Phenomenal AJ Styles. AJ Styles earned his notoriety as one of the best wrestlers in the world in NJPW, after being widely overlooked and unappreciated overall during his career in TNA. But by joining the Bullet Club, and being treated like a special commodity, his career skyrocketed. And he was crowned the new leader.

And not only was he the leader of the number one faction in the world, but unlike Devitt, NJPW had the faith in him to beat Okada, and he became the IWGP heavyweight champion. 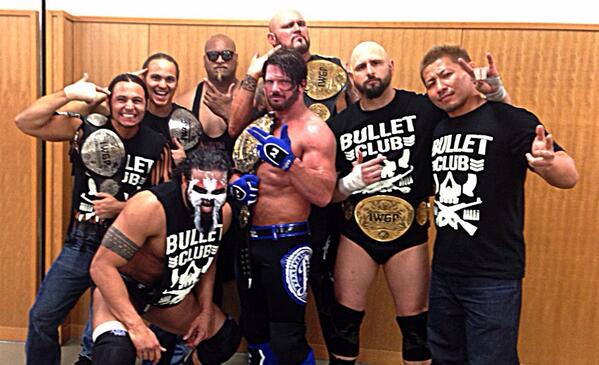 The Bullet Club was stronger than ever. But I must say that at the time, I thought they were adding too many people and watering down the group. I thought they really were heading for a NWO nose dive when they added the guy in the suit in the top right below. Smh. 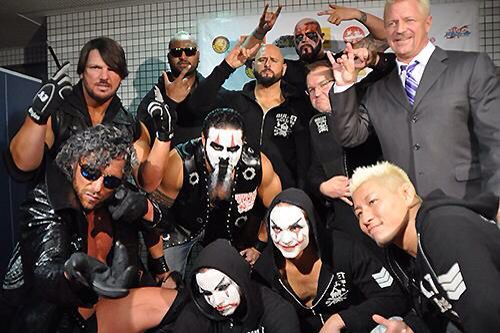 But in hindsight, the most important addition in the latter part of 2014, was the addition of Kenny Omega, who would become on e of the best Super Juniors in the world and run the division. I say in hindsight because things for the Bullet Club began to take a drastic turn at the end of 2015. 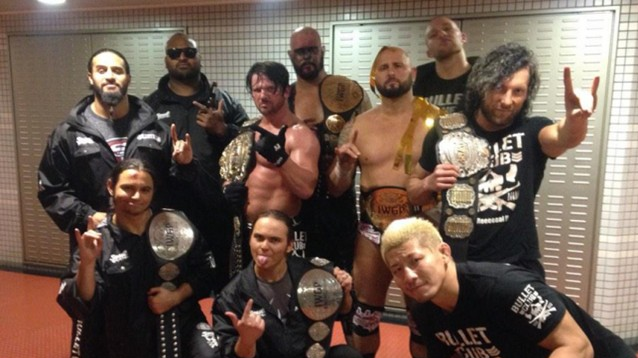 Like with Prince Devitt, WWE had their eyes on New Japan Pro Wrestling all along, and they wanted the big stars to come and join. So, not only did they recruit and sign Shinsuke Nakamura, but they raided the Bullet Club, signing AJ Styles, the leader, and Anderson and Gallows, the top tag team.

Losing all four men was a huge hit to New Japan Pro Wrestling and dramatically changed many booking decisions. Most importantly, the Bullet Club was really hurt by this. But like any great booker, Gedo thought quick on his feet and made lemonade out of lemons. The call was made to elevate a new leader, and he would come from within the ranks of the Bullet Club. Yes, it was Kenny Omega. 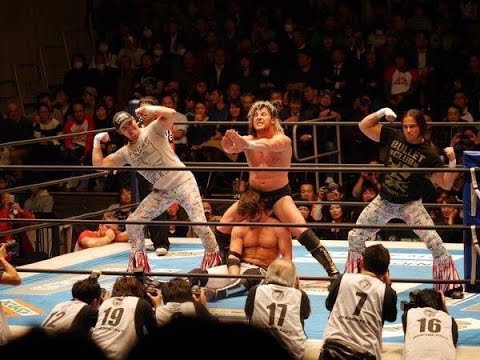 So the night after Styles lost to Nakamura in the match of the year so far in my opinion for 2016, a hell of a contest at Wrestle Kingdom 10, the Bullet Club, led by Kenny Omega, turned on AJ Styles and sent him packing to WWE. Of course fans immediately didn't catch on to believing Omega could be the leader, but his win over Tanahashi for Intercontinental title, and the speech afterwards, solidified his position as the head of the best faction in wrestling.

The Faction is still seen as cool because the Young Bucks and Omega are cool acts. But the rest are just bodies at this point. Fale and Devitt together was magic. Without Devitt, Fale has gotten a push and IC title run, but let's be real, that's not the appeal of Fale. But for now, they are still the hottest act in NJPW.

​But let's be real, there is no denying the fear that WWE will continue to poach the top talent in NJPW. The Young Bucks are clearly the hottest act today, and there has been an ongoing internet feud between the Bucks and the New Day from WWE. Could I see them signing and joining, yea. And that would crush the Bullet Club. The name Balor Club was trademarked by WWE and many expect an eventual reunion on Balor (Devitt) with Gallows and Anderson. Would Styles join them or be their opposite. Who knows, but it sure is interesting.

Either way, there you have it. That is the Bullet Club in a nutshell. The next year in WWE should be very interesting, and consequently, watching how things go in NJPW will be as well. I have a feeling a lot more is to come. 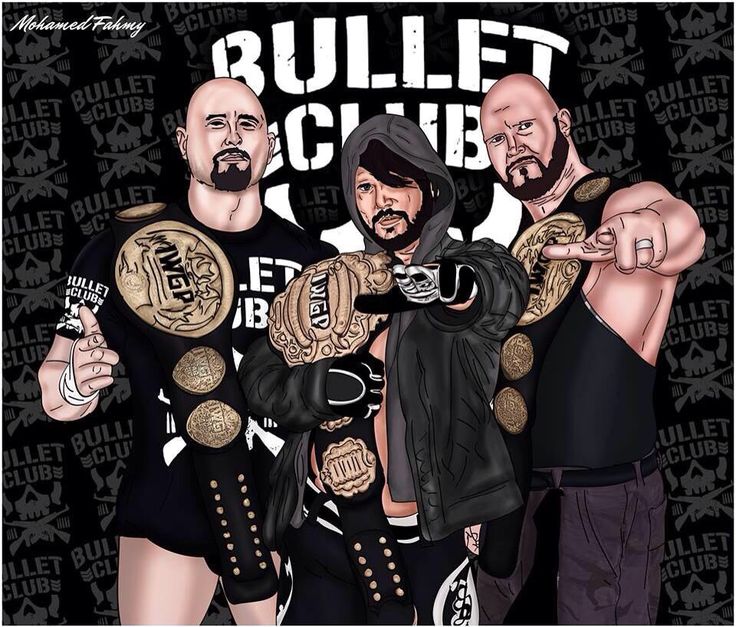