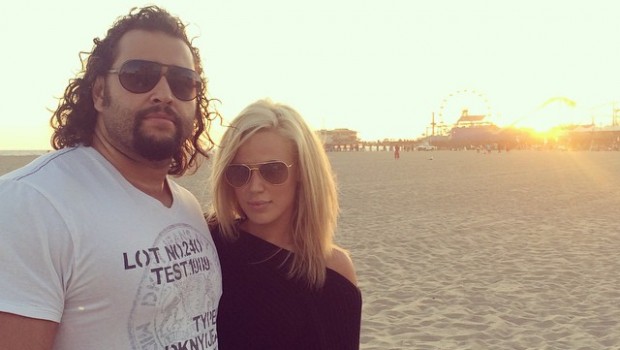 By: Larry Causion Jr.    CausionCreations.com
Posted: Thursday, October 15, 2015
After photos had gotten around recently of Lana with an engagement ring from her social media accounts, the assumption was that she and Rusev, who purchased a home together some time back in Nashville, were engaged.

TMZ confirmed that Rusev and Lana had gotten engaged last month when he popped the question in their backyard by the swimming pool. 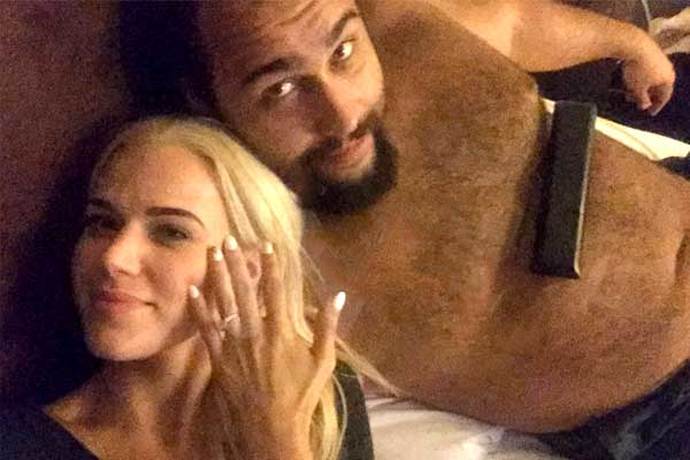 This story broke less than a week after WWE started an angle on the 10/5 Raw where Summer Rae had just proposed to Rusev, and he accepted, with the proviso that he first had to win the WWE title before they could get married. The fact Rusev had gotten engaged in real life to Lana was known to the higher-ups, and there’s little doubt in my mind the decision to do the angle with Summer Rae on 10/5 was due to it. And in storyline, ever since the engagement, they have changed it from Rusev and Lana being enemies to Rusev still having the hots for Lana and Summer clearly being the substitute, as opposed to the replacement.

With the story breaking, WWE turned it into storyline. Keep in mind that WWE constantly plugged how TMZ broke the story, and WWE only mentions the media source that broke the story if they feed the story to them first and have a good relationship with them. The idea they were blindsided by this wasn’t the case.

WWE was fully aware of it coming out, but Vince McMahon wasn’t happy it got out. It makes sense when you think about it, because it’s not about getting engaged, but about maintaining character and storyline in public. Part of the job of a WWE performer in social media is to play the role, although then again, you can argue, starting at the very top, that the rules don’t always apply.

On Raw, Rusev wrestled Ryback, and Summer Rae was in Rusev’s corner. The announcers wondered why she was there since everyone knows Lana and Rusev are engaged, “as reported by TMZ.” But after the match, Summer ripped Rusev a new one, screaming at him for having been engaged for a month and never telling her. She called him a narcissistic, egotistical, jealous, lying, cheating bastard and slapped him in the face. He grumbled some stuff in Bulgarian and it was over.

They had started Dolph Ziggler romancing Summer a few weeks ago, with the idea she was thinking of leaving Rusev, until the proposal that came out of nowhere and seemed to indicate a major change in storyline. Ziggler has since been removed from any interaction with Rusev or Summer, but there were teases of a heel turn. In theory, Cena should lose the U.S. title either on Raw on 10/19, or at the Hell in a Cell PPV, since he’s going on a sabbatical. He pinned Ziggler in a very good television match and there hasn’t been a tease of Cena with anyone else for the PPV. If Summer is to suddenly help Ziggler beat Cena, leading to a Rusev turn with a face Lana, then we can conclude they had a direction and likely changed it and sped it up with the engagement. But if Rusev has no program, that means the angle on Raw was to get out of the storyline and with no future direction. For Ziggler, the innocent bystander so to speak, the key would be that if Lana dumped him in storyline, he’d come off bad, so they had to walk away from his romance with Lana without damage to him.

Given Cena leaving, Ziggler is going to need some kind of a program going forward.

Rusev & Lana was another example of art imitating life as the two were put together two years ago in developmental. She had been with the company for four months at that time, after being signed from a camp where they recruited women from Southern California modeling agencies.

He started training eight years ago at Rikishi’s school in Torrance and was signed by WWE five years ago. It was Dusty Rhodes idea to put them together, and it’s crazy how many scripted relationships in pro wrestling turn real, the most notable being Daniel Bryan & Brie Bella and HHH & Stephanie, which were both booked by writers in storylines long before they became real-life, and ended up being married couples. 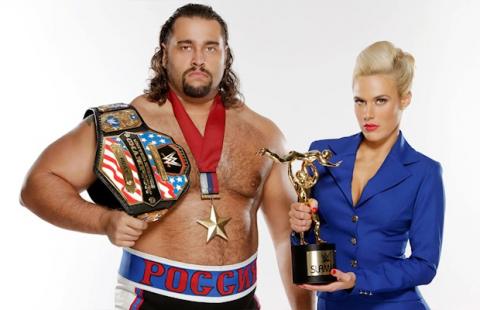