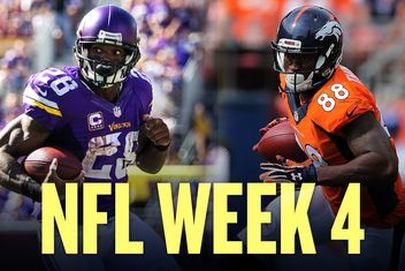 Check out my thought's on some of the main headlines from around the league on Sunday. What a crazy day, with injuries, upsets, and no shows. ​

Can't lie, I didn't see the Bills getting beat like they did by the Giants. Tyrod Taylor was harassed and manhandled. They couldn't run the ball, and clearly they missed Shady McCoy.

​The Giants are now on a roll. They could easily be 4-0, and look to be the best team right now in the NFC East. Great win on the road.

The Bengals have alot of weapons, and they rolled the Chiefs, who simply don't have a lot of weapons. Andy Dalton is playing at a very high level and utilizing all of his weapons to perfection. He still makes mistakes, but he deserves credit for getting it done in the regular season.

Andy Reid has lost the aggressive edge he had during his glory years in Philly. The Chiefs kicked 7 fgs, and couldn't cash in at any point. At some point, you have to roll the dice and let our play makers make plays. Otherwise, what is the point? He might be gone if this continues.

Philly is that team we all thought would be good, but just have to admit, really sucks. They have no identity. Although Sam Bradford tried to bring them back in the 2nd half, it was too little too late and that secondary was pathetic.

Give the Redskins credit. They got work done when it really counted. I still don't think they are any good, but they beat a team that is just in worst shape than them, at home, so kudos.

Jay Cutler returned and I give him credit, he got it done and against a Raiders team that was on the rise. Big win for the team I felt was the worst in the league, and without Alshon Jeffery.

As for the Raiders. Smh. I guess the Ravens really do just suck.

It was not pretty. It was hard-earned and, at times, the game was a field goal away from turning into a dire situation. Yet, through it all, some big plays sparked the Denver Broncos on both sides of the ball and helped them improve to 4-0. Peyton seems like he's just a different guy out there.

The Vikings gave it all they had and almost pulled it off. But Teddy Bridgewater was just harassed and beaten up all day by the Denver pressure. Give him credit as he was able to get Mike Wallace involved and they almost pulled off the upset.

Rams Knock off the Cardinals

I shouldn't be shocked. The Rams opened the season by beating the Seahawks, and they always play tough within the division. But I just didn't see the Cardinals defense getting exposed like it did. Tavon Austin put up big plays and Nick Foles played huge, especially in the 2nd half.

The real game ball goes to the Rams defense that was able to keep the Cardinals receivers in check and stop the run in key spots, on the road at that. I still think the Cardinals are very good, but this game had more to do with the Rams executing a great game plan. Congrats to them.