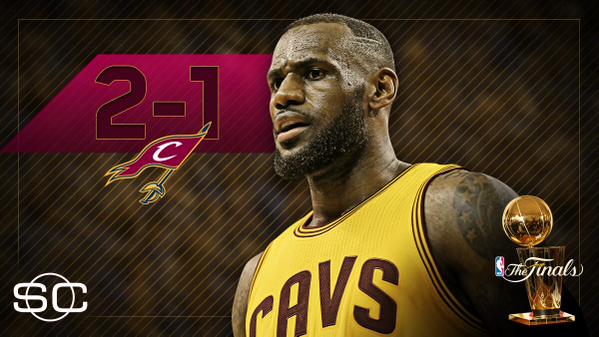 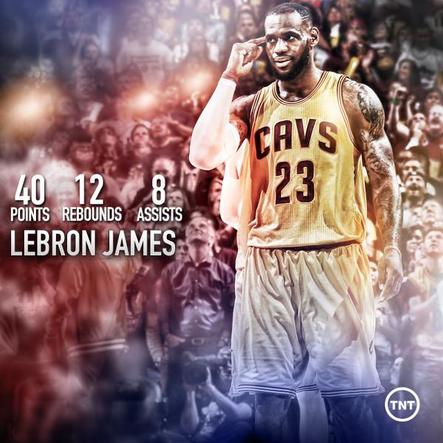 Last night, the Cleveland Cavaliers showed the world that their heart can not be measured in statistics.

Was it a masterful efficient performance by Lebron James. No. Did they play mistake free, smooth, beautiful to watch basketball. Hell no. But at the end of the day, anyone with two eyes saw that Lebron James and the Cavs are willing to lay it all out on the line to win a championship.

With the series tied at a game a piece, the Golden State Warriors, who finished with the best record in the NBA during the regular season, traveled to Cleveland, to recapture the home court advantage they lost in game 2.

Well, the Cavs had other plans. Led by not only another eye popping stat-line from Lebron James, but also a gritty, scrappy, and gutsy performance by Matthew Delavendova, the Cavs defeated the Warriors 96-91, to take a 2-1 series lead.

Lebron controlled the pace of the game masterfully once again. Slowing the game down and conserving energy was key to the Cavs being able to play long minutes with their injury laden, shortened roster. Lebron forced the issue and put pressure on the defense all night.

Tristan Thompson was huge on the boards and had key plays inside. Iman Shumpert battled a shoulder injury, but made huge contributions throughout. Especially the defensive job he put on Klay Thompson. JR Smith rebounded well from his bonehead mistakes in game 2 and contributed in key spots throughout the game. James Jones and Mike Miller gave the Cavs a great boost off the bench. Quality minutes.

But the star of the night had to be Delavendova. Give the man credit for slowing down the reigning MVP Steph Curry once again. Though Curry got hot late, it was not enough, and for three quarters, Deli out played him. His defense was tenacious, his offense was uncanny, and his toughness and willingness to do whatever it takes was an inspiration to his teammates.

The series is still hanging in the balance. The Warriors are still in position to win the series and could easily make a few adjustments that would change the momentum right back in their favor. I have been calling for Steve Kerr to insert David Lee into the lineup, and he finally came in last night and helped Golden State make a hell of a run. His presence and ability to be physical inside and be a threat on the pick and roll is crucial. Look for him to receive more big minutes going forward.

But this was about what the Cavs did well, not what the Warriors didn't do. They held the NBA's number 1 scoring team to below 100 again, and completely dictated the pace and feel of the game.

Lebron James is leading like few I have ever seen and it is a treat to watch.

Here are some opinions from a few of the Crew members.

Andrew Wilson: LeBron is tryna pass Larry Legend and Kobe Bean. Still a long series, but it could easily be 3-0 Cavs. He's literally putting his thumb print into the series...it's like he's seeing it play out like the code in the matrix. Everything's moving into the places he wants.

Calvin Thomas: I picked GS to win the series in 6 but I have never seen this Lebron play before. Lebron is doing what is needed to bring the city of a Cleveland a title. You can tell he's grown as a leader and a player in this series (see his last shot in game 1 vs game 2) regardless of the fact he missed both he's seems to be no longer afraid to step to the free throw line in the closing moments (see game 3). GS can't wait and think they can turn it on and off they have to play with a sense of urgency from the tip. I still think they will win in the 6 because I don't know it the Cavs can keep this up for the 2 games needed to win that elusive title. Regardless the legend of Lebron is growing, greatest SF of ALL TIME and soon to be greatest active player in the league.

Dorian Jones: I've never really been "team fan" I've always been a "player fan". Lebron and Curry are just two of my favorite players. Lebron has already won his chips so I was all for Curry to get his first, but Lebron says that it's still his time. Dova has the "clink-clink" on Curry taking him out of his game and making big plays when needed these last two games. What more could u ask for! I don't like to go against my pick but I have seen with my own 2 eyes GS get the life sucked out of them. Soooo with that said Cavs in 6 if Lebron or Dova doesn't get hurt.

Justin Harris: In a world when scouts look at young players as talents, "is he over 6feet?" "How fast is he?" "How athletic is he?" "What's his wingspan?" It is very refreshing that a player is showing that HEART and PASSION can be essential parts to a game. Matthew Dellavedova, all 6'4 200lbs, undrafted out of Saint Mary is showing just that and more. Armed with a rugby background and his love for the game of basketball, he is putting his stamp on this series and even though he will not get the credit he deserves after this series is long and over, no doubt he is an inspiration to many others playing now and those to come.

Rick Williams: Exciting series, but the last couple of games, something has been missing... Oh yeah, Curry. Tried to appear in the second half but too late. Lebron is making history... Playing with an agenda!!! Cavs in 6

Tim Jones: Lebron is doing everything he has to, to win this chip. I have grown much more respect for him after seeing this showing by him. When they lose it will not be on Lebron but the splash brothers have not shown up together yet and they will. I'm still sticking wit my pick in GS. The Cavs keep blowing big leads at the end and I think that will come back on them in the end. For GS to be the champs I think they need to get David Lee more involved in the game, cause he can play wit back to the basket. 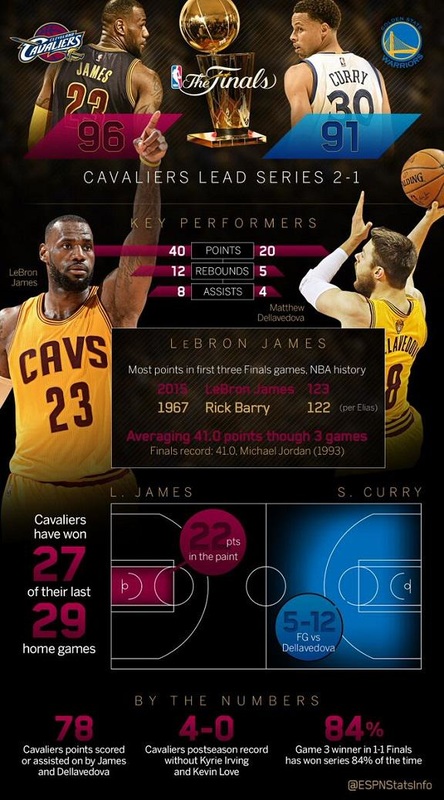